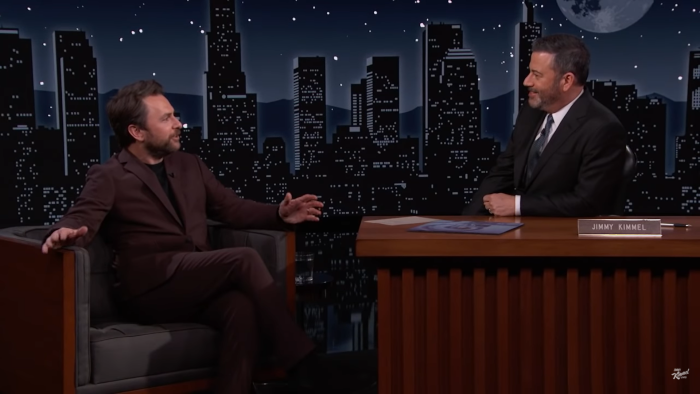 When I moved to New York City in 2007, I brought a suitcase full of clothes and a couple of DVDs. One of those DVDs was a new (to me) show called It’s Always Sunny In Philadelphia. The foul-mouthed, boundary-pushing show quickly became one of my favorites. Now, fifteen years later, it’s still one of my favorites. I’ve changed (I use Blu Rays now NBD), and so has the show. That is likely because the actors have changed, which was illustrated perfectly during Charlie Day’s recent interview on Jimmy Kimmel: Live.

There was a time when Charlie was the weird dude on the show who couldn’t read and huffed glue. That hasn’t entirely changed, but the actor’s profile certainly has. He’s been working for years. Kimmel even digs up an old Cascade commercial that he was in. A commercial I very much remember despite having no idea that it was Charlie. He went from that to doing voiceovers for IFC, to his show, to blockbusters like Pacific Rim. Soon he’ll be voicing Luigi in an animated Mario movie. He’s achieved this all while playing a character who can’t read and huffs glue.

It would be one thing if It’s Always Sunny In Philadelphia had more of a mainstream appeal. Of course, Charlie would be getting all of these jobs if that were the case. Instead, Sunny has remained on the fringes of pop culture. Yes, it has a lot of fans, but it’s not what some people may call “mainstream.” Despite the show’s underground success, Charlie has managed to break through and become somewhat of a household name. This is a man whose character was once gifted a bat encrusted with nails that he could use to bash rats.

Seeing Charlie gain the kind of fame he has, despite playing a lovable yet unhinged character, has been a wonder to behold. The only way it could be better is if the Gang at Paddy’s Pub earned the same amount of notoriety.


← Trevor Noah Points Out The Idiocy Of Joe Rogan's 'Black' Comments | Aziz Ansari on Aaron Rodgers: 'Can We Cut Him a Break?' →