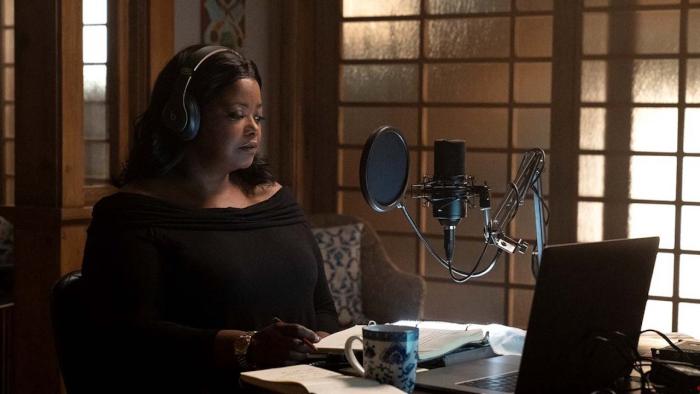 Review: 'Truth Be Told' On Apple TV+ Does Not Work

Truth Be Told is the latest in a series of mostly mediocre new TV shows on Apple TV+ (The Morning Show is a rare exception, having evolved into a formidable drama). This one has a hell of a cast — Octavia Spencer, Lizzy Caplan, and Aaron Paul — and a promising premise loosely based on Kathleen Barber’s Are You Sleeping?, but after a compelling but plodding pilot episode, the series quickly death spirals under the weight of its own melodrama.

Is Truth Be Told a crime thriller? Is it a noir about twin sisters? Is it a dark family drama? Or is it a really bad soap opera? I don’t know, and neither apparently does Truth Be Told, which can’t seem to figure out what it wants to be. Apple has been very good about finding top-level talent in front of the camera for their new series, but I suspect there’s not a lot of top-shelf writers left to staff these series after HBO, Netflix, Hulu, and Amazon pull the best off the top. The result, evidently, is six writers trying to write six different shows, and the series jumps back and forth between maybe this is good?! to oh no, this is a bad Lifetime movie!.

Octavia Spencer plays Poppy Parnell, the host of a popular Serial-like crime podcast. Twenty years ago, as Poppy was trying to break in as a journalist, her reporting helped put a teenager, Warren Cave, in prison for the murder of his neighbor, author Chuck Buhrman. There were only two pieces of evidence, however, linking Warren to the crime: His fingerprints were in Buhrman’s house, and one of Buhrman’s twin daughters testified that she saw Cave leave the scene. Twenty years later, however, Poppy believes that the daughter’s testimony may have been coached and that Warren may be innocent, so she fires up another season of her podcast to find the truth.

First, however, she has to convince Warren Cave — whom she helped to put away — to see her, which means going through Cave’s mother, Melanie (Elizabeth Perkins), who is dying of cancer. Once Poppy gets permission to see Warren (Aaron Paul), she learns that in prison he’s joined a white supremacist gang and has a bunch of Nazi tattoos. OK. But also, the victim’s daughter, Josie — who testified against Warren — may be a psychopath and is definitely mentally ill, while her twin sister is estranged, having moved away to escape Josie. Also, Poppy’s father (Ron Cephas Jones) is a former Black Panther and may be suffering from dementia. Meanwhile, Warren knows that his mother was sleeping with the victim, which gives Warren’s father a motive to kill the victim. Warren’s own father is a crooked cop who helped to put Warren away. Poppy is also suffering from marital problems, an old boyfriend (Mekhi Pfeiffer) is helping her investigate the case and definitely wants in her pants, and reopening the investigation is creating problems with the cops for her own family.

It’s a lot when it didn’t need to be a lot. When it could have been so much better if it’d been streamlined and had it trained its focus on one or two storylines. It doesn’t help, either, that Poppy Parnell is a secondary character in the source material, but expanded into the lead character here without being given enough story to justify it (in the book, the Lizzy Caplan character is the primary protagonist). Ultimately, and sadly, it’s a sloppily adapted series that’s so weakly written that the considerably talented cast has to provide over-the-top performances to make up for the bad writing. It ensures that Truth Be Told is never boring, but it’s never very good, either.

← Chris Christie Gets Wrecked Trying to Argue Impeachment with Sunny Hostin | Wish.com Is Your One-Stop Shop For Becoming A Discount Kylie Jenner In The New Year →