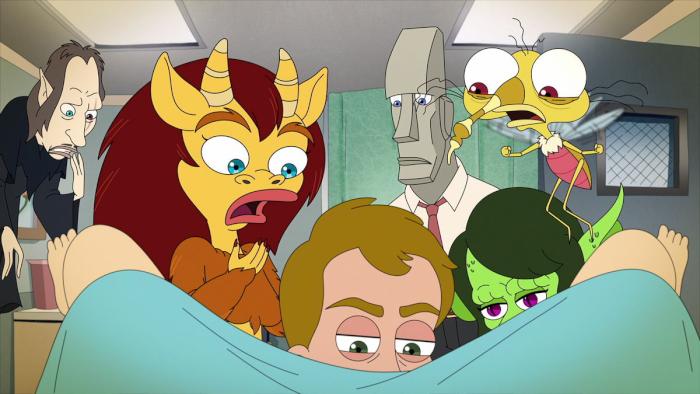 Puberty sucks and the basic human experiences don’t get much better after that. It’s bad enough that your body is betraying you so messily, but then there are haywire emotions that demand your attention and nothing you do seems to be the right way to fix all of your mental anguish. Sometimes, you just need a guide through the madness and not one who is your parent, best friend, or awkwardly enthusiastic guidance teacher. Enter your monsters.

The eponymous workplace of the emotional monsters features an array of new faces (with familiarly profane approaches to their jobs): there’s the hot-headed ambition gremlin (Rosie Perez) pushing humans up the career ladder; sturdy rock men (Randall Park) act as masters of logic, often being the only vaguely sensible voice in the room; ceaselessly panicky need demons eschew subtext in favor of screaming out primal human desires. There’s even an addiction angel (Hugh Jackman?!) Newly thrown into this chaos is Emmy (Aidy Bryant), a trainee love bug forced into the frontlines after her boss is mysteriously fired.

Pitched as Big Mouth meets The Office, something the show admits in its first episode, Human Resources doesn’t quite pack the thematic heft of its predecessor. The jokes are still here, and at a level of frequency that will feel familiar to fans of co-creator Nick Kroll. The show is still aiming for a degree of relatability. We’ve all gone through puberty and the chances are the majority of the series’ core demographic have experienced workplace troubles: tiffs with colleagues, lack of appropriate training, having to clean up the ejaculate in the kitchen… You know, the usual stuff. As such, the concept isn’t quite as focused as that of Big Mouth but the more freewheeling approach has its upsides.

We spend more time with monsters like the Shame Wizard (David Thewlis), who is simultaneously malicious and pathetic and smothered by mommy issues, and Gavin (Bobby Cannavale), the epitome of toxic masculinity with a weird fetish for having his d**k cut off. Hell, I think this series out-grosses Big Mouth at times, which is a mightily impressive feat. A focus on adult characters and their problems allows further moments of candidness, such as a childbirth scene and a focus on some painfully cracked nipples. One of the several humans centered in this season is Becca (Ali Wong), a litigator struggling with postpartum life. Emmy struggles to inspire the love in her needed to help her endure such a tumultuous period, all while a familiar depression kitty wanders in to smother their new client. She also spends time with Yara, an ailing grandmother suffering from dementia, whose love bug Walter (Brandon Kyle Goodman) eases her struggles by letting her mentally relive her youth with her first love. I must admit that the latter storyline made me cry quite hard, something not even Big Mouth has managed (hey, I suppose I needed to find a new Netflix cartoon to sob at after BoJack Horseman). Puberty may bring out a primal sort of need but the wider cavalcade of emotions tease out the subtler conflicts that we must deal with on a daily basis. How do you get through life while your ambitious streak bumps against your desire to have kids, or listen to your logical side when love or panic is much louder in your head? It feels like a miracle that any of us are able to get out of bed in the mornings, something Human Resources is mightily sympathetic towards.

As such, the choice to try and encapsulate something as intrinsically complicated as human emotions makes the show uneven. It can be tricky to figure out how all of these disparate creatures work while on earth. Sometimes they’re all together for one human while other times they’re running around solo. This does embody the ways that certain voices in our minds take over at inopportune times but makes for mixed emotional effect in practice. Kroll and company must be lauded for how ambitious and progressive they’ve always been in trying to embody changing ideas about gender and sexuality through this lens of gross-out surrealness but there are moments when that throw-everything-at-the-wall approach don’t work. One subplot features Sonya (Pamela Adlon), a former lovebug who is kicked out of Human Resources for reasons unknown. She later reveals that it’s because she fell for a human doula named Claudia (Janelle Monae, whose song ‘Make Me Feel’ is the kickass theme to the show.) The series wants to use this as a way to explore mental illness, but it keeps cutting back and forth between a B-plot about illegal and very literal c**k fighting rings, complete with Nick Kroll’s well-worn Stallone impression. Even when the show calls out the awkward juxtaposition, it cannot help but undermine what could have been the show’s prickliest and most ambitious aspect. Yes, the show has always operated by the logic that there’s no gap between the hilarious and the poignant, but one still needs breathing room at times to allow the latter to sink in.

The first season of Human Resources isn’t the slam dunk that the premiere of Big Mouth was but the foundations are sturdy for this spin-off to mature into something as special as its pubescent sibling. These are characters you want to spend more time with and the spectrum of human weirdness certainly isn’t short of further narrative opportunities. Or d**k jokes. And those jokes are funny, after all.

Season one of Human Resources is available to watch now on Netflix.