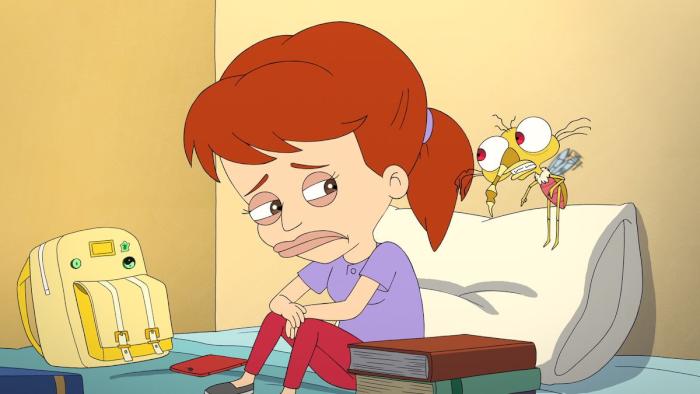 Just as bodies change, Big Mouth is evolving too, as its fourth season dropped last week. The kids are ready for eighth grade, but first, they must deal with a whole new barrage of problems. Andrew (John Mulaney) has fallen out with BFF Nick (Nick Kroll), making their time at Summer camp together all the more awkward. Jessi (Jessi Klein) is preparing to move to the big city while battling the overwhelming return of the Depression Kitty (Jean Smart). Nick is being barraged by anxiety, which has taken the form of a tetchy mosquito voiced by Maria Bamford. Missy is having a crisis of identity over her race. Matthew (Andrew Rannells) is tormented over whether or not he should come out to his conservative parents. And Jay and Lola… well, of course, they’re together now.

The gang is split up for the first few episodes of the season, allowing them some time to deal with their unique problems, but they’re not alone. A regular to camp has returned after transitioning, and her isolation from her former bunkmates leads her to strike up a friendship with the equally lonely Jessi. As voiced by Josie Totah from the reboot of Saved By the Bell, Natalie becomes the first trans teen of Big Mouth. Following on from season three’s less-than-successful intro of the pansexual Ali, which the writers admitted they screwed up, Natalie is given more room to breathe as both a character and a thematic beat. The boys ask horribly intrusive questions, the girls treat her like a dress-up toy, and the camp counselors (including one voiced by John Oliver) are painfully ignorant of the entire situation. It’s a shame we don’t get more of Natalie beyond the camp, because Totah’s performance is confident and well-balanced, conveying the awkwardness and pure irritation of a young woman who is effing tired of having to explain herself 24/7. Her intro also brings back the truly terrifying macho-monster Gavin, who reacts to Natalie’s rejection of him by screaming about how he’ll never have toe hair or write for Bill Maher.

Season four may be the season of Missy Forman-Greenwald. The proudly awkward nerd of the group, Missy has always been a welcoming combination of self-assured in her oddities, eager to embrace the big bad world, and out-and-out horniness. While Missy is a mixed-race girl, Big Mouth had never before tackled issues relating to her Blackness, most likely because she was voiced by Jenny Slate. Several months ago, the show announced that Slate would be replaced by Ayo Edebiri, a writer on the show who helped to shape Missy’s character in the first place. She, however, only turns up in the last two episodes. For most of the season, and most of Missy’s journey relating to her racial identity, she’s still voiced by Slate. While her friends are off at camp, Missy goes to visit family in Atlanta, including her achingly cool older cousins who take her to a Black hairstylist for the first time and introduce her to notions of her own identity she’d previously never considered or had the chance to explore.

Always ready to break down the fourth-wall, Missy, as voiced by Slate, notes that she ‘can’t say’ certain words. She’s introduced to the concept of code-switching by DeVon, who finally gets more to do than be Devin’s plus-one. By the end, as Edebiri fully takes over from Slate, we see the satisfying acceptance by Missy of the various facets of herself as a young Black woman. She faces various versions of Missy in a hall of mirrors (and yes, there is a reference to Us) and realizes that she doesn’t have to choose one kind of Missy to be. She can be dorky and cool and embrace her Blackness in the way she wants to, not how her parents or cousins or sh*tty white classmates tell her to. It’s certainly an interesting way for the show to pivot from Slate to Edebiri, although one can’t help but wonder why so much of this journey of race for Missy was vocalized by a white woman.

Season three ended with Andrew trying to disconnect himself from Nick by noting how his best friend is often selfish, pig-headed, and unconcerned with other people’s feelings. This is an insult that haunts Nick this season, leading to the anxiety mosquito essentially dethroning his hormone monster as his constant companion (he isn’t the only one, as anxiety plagues all the kids in some form or another, like a way less sleazy shame wizard.) Nick is still somewhat behind his classmates when it comes to the terror of puberty, and a series of anxiety-induced events lead to him being ostracized by his campmates. It all makes him wonder if maybe being a selfish jerk isn’t so bad. At least that would make him impenetrable to the panic and isolation he’s currently suffering through. For a show defined by its strangeness, this narrative leads to one of its more unexpected turns, with Nick being plagued by his own possible future self, the arrogant jerk gameshow host Nick Starr. The emotional trauma of adolescence is often boiled down to trite clichés or romantic conundrums in pop culture, so it was refreshing to see Big Mouth dig into the uncertainty of self. Trying to figure out who you are is an endless journey of indecision that plagues so many of us for decades. When you’re still a child, the prospect of becoming someone else, someone so different from your uncomplicated self, can be petrifying. For Nick, he fears it could be the end of himself in every feasible manner, which presents an intriguing contrast to Missy’s journey.

This summary makes the show sound rather self-serious but never fear: Big Mouth is still merciless filth. Andrew struggles with constipation, both emotional and literal, and of course, said poop is voiced by Paul Giamatti. Lola and Jay make the perfect couple thanks to their dirt-goblin energy and surprising empathy for one another’s growing pains. Missy’s hormone monster Mona (Thandie Newton) is ever-so lascivious and treats every situation like she’s Mae West with a playbook of innuendo to spout. Andrew and Nick try to impress some seventh-grade girls (voiced by Maya Erskine and Anna Konkle of Pen15), and their one-off appearance is chock-full of spin-off potential (they have a F*ck Gremlin!)

The magic of Big Mouth has always been in how it encourages its viewers of all ages to embrace their inner weirdness, and that’s still true of season four. This time around, however, it’s also here to remind us that it’s OK to be scared, not just of hormonal frenzies but of the emotional chaos of being alive. Overall, it’s a more well-rounded season than the third one, although it doesn’t reach the pure laugh-out-loud heights of season two. It’s maturing, much like its ensemble. It shouldn’t seem as audacious as it does that Big Mouth thinks young people have the right to be gross and confused and ready to assert themselves in whatever way they choose, but it does. We’re guaranteed at least two more seasons as well as a spin-off, and there’s still so much to explore. We’re ready to follow those horny freaks into the wilderness.

Season four of Big Mouth is now streaming on Netflix.

← You're Just Pathetic, Don | 5 Shows After Dark: 'The Grinch Live!' on NBC, 'Alabama Snake' on HBO, 'I Can See Your Voice' First Season Finale →