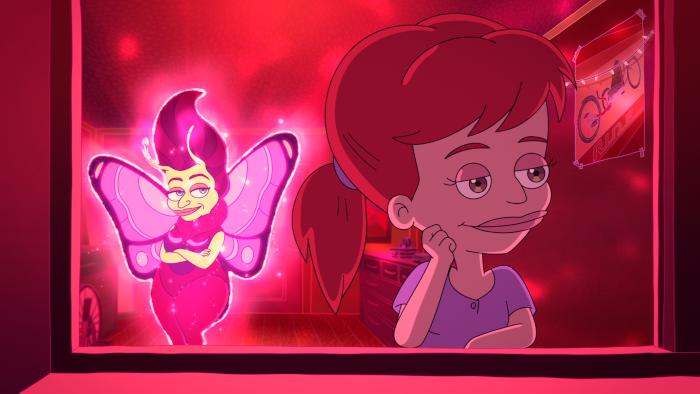 Review: The Jokes Are Still There but Season Five of ‘Big Mouth’ Feels Like a Step Down

Big Mouth has long been one of the most unexpectedly savvy shows on TV, a raunchy animated comedy that managed to turn the deeply uncomfortable topic of adolescence and teen desires into something progressively minded yet super hilarious. Amid the bad-taste gags and endless ways to describe going on autopilot, this is a show with a beating heart that takes its concept seriously. Co-creator (and voice of about 70% of the cast) Nick Kroll keenly knows that the best way to tackle something that remains so oddly taboo is with a no-holds-barred approach. And plenty of d**k jokes.

There are new creatures every season, introduced to provide guidance and screw up the kids’ lives in surreally familiar ways. This time around, the new monsters in town (ready for the impending spin-off series Human Resources) are love and hate, represented by wide-eyed butterflies and sassy snakes. The green-eyed monster can rear its ugly head at the most inopportune moments, poisoning good intentions and strengthening your most bad-faith readings of simple situations (note: there’s no literal green-eyed monster in Big Mouth.) The first flutters of young love, with Nick ready to confess all to Jessi and Jessi latching on hard to her new BFF Ali, are loud and as confusing as any other monster that’s plagued these kids’ lives. The difference is that love at such an age is fickle and it takes no time at all for that flush of dizzying passion to rot if the conditions aren’t 100% perfect.

For Missy, the unabashed dork of the show, her adolescence has been unexpectedly bumpy. Despite being raised by hippie-dippie parents with sex-positive attitudes, nothing has prepared her for the reality of emotional panic. Her hormone monster Mona (Thandiwe Newton, still having the time of her life) has a one-track mind and minor squabbles with her friends have begun spiraling dangerously out of control. It’s interesting to see Missy, a character widely defined by her general contentedness with her life and persona, admit that she struggles with the dork label. Can you really be OK with it when everyone else sees it as a joke? Soon, Missy’s hate evolves into a level of spite that seems somehow unexpected and inevitable for someone like her. Doesn’t everyone have some experience with the super nice girl and her bleak side that grew from her outcast status? Not relating too hard to it or anything. Ayo Edebiri, a writer on the show who took over the role of Missy from Jenny Slate last season, is such a natural fit that you wonder why she wasn’t there from the beginning.

A lot of comedies that run longer than four or so seasons end up deviating from the core of their characters for ease of getting to the joke. They start doing or saying things that don’t entirely fit their personality for the good of the punchline or unwieldy narrative. Sadly, I feel like this is what’s happening with Andrew this season. The initial protagonist of Big Mouth, Andrew was always a tricky character to nail down given that his defining characteristic is his love of (and inability to stop) masturbating. The show smartly focused on the smothering embarrassment of his chronic condition and his eagerness to balance his oft-shameless urges with the demands of polite society. It could go over-the-top (such as his crush on his cousin) but the core of the relatable problem remained. This season, however, Andrew is ever-shifting, veering from being the most perverted he’s ever been to playing the role of the ever-sensitive boy in touch with his feelings as the other kids become consumed by envy and hate. It says something when Jay, the kid who f**ks pillows, gets a subtler story that feels more grounded in adolescent truth.

A fourth-wall-breaking joke in the finale is a touch too self-indulgent, even for a show built on talking to the audience and mocking its own fictionality, but the core messages are still mostly there. Your monsters are you and what you put out into the world, and sometimes even the weird stuff can be a wonderful experience in its own shame wizard-inducing manner. The intentions remain earnest but the expansion of the world and malleability of its concept feel as though they’re beginning to stretch beyond their limits. The joke-to-pathos balance is tipping more towards the former, and while the gags remain funny - I cackled hysterically on more than one occasion and, yes, one was a Jared Leto-related scene - the impact is softened when the potency of their message is deflated. Season four felt like a moment of maturation whereas season five seems stunted by comparison. Adolescence is a limitless pool of creative potential that feels shallower than expected when the confines of an animated comedy with franchise potential needs more and more content.

Season five of Big Mouth is available to watch now on Netflix.