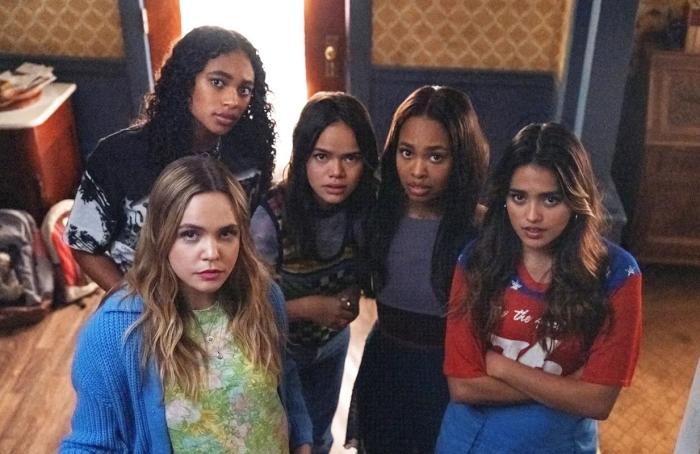 I love horror. Along with romcoms (and holes, obviously), it is my favorite genre. But increasingly, I am beginning to think that horror doesn’t belong in the television series format. You can tell a great horror story within an episode of television (see Evil or The X-Files, among some others), but telling one horror story over the course of 8, 10, or 13 episodes doesn’t seem to work. There are 13 seasons of American Horror Story that can attest to that (and don’t give me The Walking Dead because it’s only intermittently good, and as George Romero said himself, TWD is mostly just a soap opera with zombies).

The slasher subgenre is even more difficult to stretch into 8 or 10 episodes. It didn’t work with Ryan Murphy’s Scream Queens, it didn’t work with Prime Video’s television adaptation of I Know What You Did Last Summer, and it doesn’t work with Pretty Little Liars: Original Sin, either. In all three examples, the series started out strong — decent teen casts, a compelling premise, a grisly murder or two, and an addictive mystery — but they all fall apart under the weight of their runtimes. It’s too much time and not enough story stretched entirely too thin.

Original Sin, though clunkily written, is fairly entertaining horror garbage for a few episodes, but like AHS and I Know What You Did Last Summer, it runs out of steam midway through. When that happens on AHS or even Riverdale, the plotlines become increasingly outlandish, so much so that the stakes eventually become meaningless.

Original Sin doesn’t take that approach, which is surprising considering that it comes from Riverdale/Sabrina creator Roberto Aguirre-Sacasa. What Original Sin does, however, is almost worse: It runs around in circles, taking detours into red-herring dead ends while repeatedly rehashing the same territory. It’s like one of those Netflix binge-worthy shows where you can watch the first five minutes and the last five minutes of every episode and mostly know what’s going on. Episodes four to eight are nothing but bloat, and you’re so exhausted with it that it’s hard to work up much enthusiasm for the end.

It doesn’t help, either, that by the creator’s own admission, the finale storyline emerged “late in the game.” It’s obvious. With a slasher film, it’s already written. You don’t figure it out as you go along. You know who the killer is before you shoot the film. In Original Sin, it’s a surprise! But they didn’t set it up. It comes out of left field, which makes it all the more disappointing.

It’s dumb, is what I’m saying, and while the characters are vaguely interesting, they’re not dynamic. There’s the film student, the ballet dancer, the teen pregnancy, the one whose mom is a drug addict, the adopted one, and the twin, and the series just keeps playing those same beats for ten long episodes. Maybe if you’re a teenager, Original Sin is passably entertaining. But even then, it’s not gonna be something you get together with friends and watch during a sleepover, because no one does that with horror television shows. That’s what horror movies are for, and horror television shows all seem to forget the point of great horror: Clever stories, social commentary, grisly murders, and a few scares you can appreciate with friends. You get in, you get out, you go to sleep, and you wake up with nightmares. Not to get overly “Old man yells at clouds,” but you just can’t experience that with a 10-hour series that airs over a month-long period, and if you insist on going that long, the characters can’t be as disposable as they are in horror films.