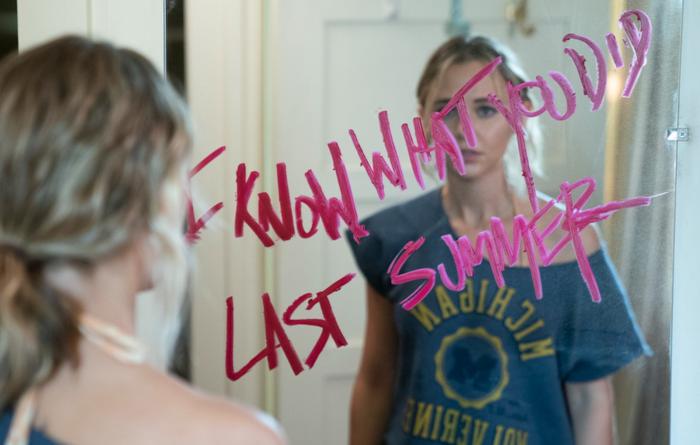 Stream It or Nah: 'I Know What You Did Last Summer,' the Series on Prime Video

I love a good slasher flick, and my expectations when it comes to then run fairly low: I want to see a lot of grisly deaths, maybe a few decent one-liners, a half-decent twist, and a modicum of character development. I’m not that interested in characters I know will soon be killed off, although half the fun in a slasher pic is trying to figure out the order of death, understanding that it’s usually the chaste white girl who makes it to the end.

Amazon Prime Video’s I Know What You Did Last Summer television series has all of that going for it, only it’s stretched out into 8 episodes running 45-50 minutes each. It features roughly the same number of kills one might expect to see in a slasher film, but instead of seeing someone die in a brutal, bloody fashion every 5 to ten minutes, the deaths are rationed out to around one each episode. It leaves a lot of time leftover for character development, and while that’s not necessarily a bad thing, it’s weird that we don’t know these characters much better in a full season of television than we might in a 90-minute movie. They’re slasher tropes, but instead of fleshing them out over the course of the series, I Know What You Did Last Summer mostly belabors the same character traits: There’s the handsome, muscular gay guy; the sarcastic quirky girl; the popular influencer with an eating disorder; the moody guy, and the Final Girl.

The most interesting thing about IKWYDLS, however, is that the Final Girl is an identical twin, and the person she killed “last summer” was her twin sister. The twist is that not only does she cover up her sister’s death, but she assumes her identity, as well.

In the premiere episode, we are introduced to twins Lennon and Alison. Lennon is the popular one; she’s the valedictorian of her school, she does a lot of drugs, has a lot of sex, and is also vindictive. Alison is the sad-sack sister with no friends and no future prospects. She is obviously the one to whom we are supposed to relate.

In the pilot, Lennon and Alison get into a fight because Lennon slept with Dylan (Ezekiel Goodman), the handsome, moody nerd, with whom Alison is in love. Lennon slept with Dylan out of spite, and when this all unravels after a party, Alison jumps into Lennon’s car and all of Lennon’s friends join her, mistaking Alison for Lennon. Minutes later, Alison accidentally runs over and (presumably) kills Lennon. Lennon’s friends, wanting to protect Lennon (even though it’s Alison), help her cover it up, and everyone goes their own way after graduation. The next summer, when they all return, Alison finds a decapitated goat head in her closet and the slasher portion of the proceedings commences.

When the characters aren’t being killed off Final Destination-style, they’re trying to figure out who is killing them. There are a number of suspects, including Lennon herself, as well as the twins’ father (who helps Alison cover up the death), a mysterious local woman, or perhaps one of the principal characters themselves.

I feel almost nothing for the characters, and the performances are either completely panicked or totally chill with nothing in between. The writing can charitably be described as basic, which is to say — save for the identical twin switcheroo — there is nothing that separates IKWYDLS from any other generic slasher. The kills are decent, but again, few and far between. Still, the mystery behind the identity of the killer is vaguely compelling, and through six (of 8) episodes, I still haven’t figured it out. That’s why I continue to watch; that, and because Amazon Prime didn’t release every episode at once so I could skip to the end and find out.

I Know What You Did Last Summer airs weekly on Amazone Prime Video.