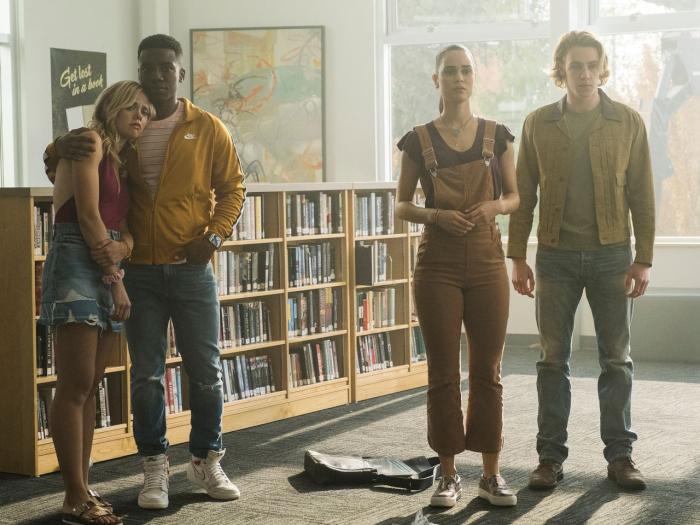 I’m a big fan of Karen McManus — the author of the book upon which Peacock’s new series One of Us Is Lying is based — and I hope that this doesn’t sound like a backhanded compliment, because it’s not. After reading a particularly heavy or grisly novel — Tana French of Kazuo Ishiguro, for instance — McManus is one of the authors I will often turn to for a change of pace. She writes entertaining and quick reads, lightweight and fun murder mysteries that are YA or YA adjacent.

They’re so quick and entertaining, in fact, that while I remember the premise of One of Us Is Lying, I cannot for the life of me remember how it ends, which works in my favor while watching the Peacock series. The premise is simple: There’s a guy named Simon, who is a loathsome little sh*t, who has a reputation for revealing secrets on his blog to f**k with the high-school hierarchy. At the outset of a new school year, Simon teases a few secrets he plans to reveal, sending a few of the school’s more popular kids into a tizzy, concerned that their lives are about to be ruined.

Four of those high-schoolers end up in detention with Simon on the first day of school when Simon — deathly allergic to peanuts — drinks from a cup laced with peanut oil and dies. “One of Us Is Lying” refers to the four other students in detention, each of whom has a motive to kill Simon because of the secrets he planned to reveal. Unexpectedly, however, the blog posts continue to arrive even after Simon’s death. In them, he reveals various dirty little secrets that blow up the lives of the four other students in detention.

There’s Addy (Annalisa Cochrane), the popular cheerleader type who cheated on her boyfriend, Jake (Barrett Carnahan) with Jake’s best friend. Cooper Clay (Chibuikem Uche) is a star baseball player with major league ambitions who is hiding the fact that he’s gay out of fear that it will ruin his prospects. Nate (Cooper van Grootel) is the Heath Ledger of the group, a charming bad boy who continues to sell drugs despite being on probation. Bronwyn (Marianly Tejada) is the would-be valedictorian who perhaps didn’t earn all of her grades honestly.

It’s all very trope-y — like The Breakfast Club meets Gossip Girl meets The Secret History — but again, no one is turning to One of Us Is Lying for richly drawn characters and deep insights. Mare of Easttown, it is not. But it is the kind of show one might seek out after watching Mare of Easttown if one were looking for a light but well-developed mystery with a few unexpected twists to cleanse the palate, so to speak. The production is glossy and the acting is mediocre, but the writing is solid, and it’s all perfectly tailored to the streaming era. Moreover, because I don’t remember how the novel ends, I’m hooked all over again trying to ascertain the murderer.

← James Bond Week: Six Great Video Essays on the Past, Future and Archer of the Franchise | Men's Advice To Women On How To Stay Safe Is Useless Trash →