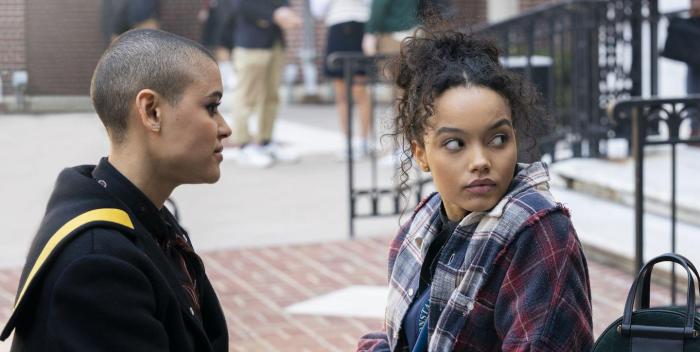 The midseason finale of HBO Max’s Gossip Girl aired last night (the back half of the season will arrive this fall), and it was something of an over-sexed dud. I have been quietly watching the series as a newcomer, having never seen an episode of the original Gossip Girl, a show that I used to confuse with The Hills. I knew enough about the original, however, to understand that revealing the identity of Gossip Girl in the opening episode of the HBO reboot was a “Big Deal,” if only because the mystery behind the identity of the OG GG is part of what kept viewers returning.

In this iteration, we learn early on that one of the teachers, Kate Keller (Tavi Gevinson) is Gossip Girl, and that she and a few of her colleagues at the fancy prep school brought back GG as a way to mute the power of the students, who are otherwise capable of getting teachers with whom they disagreed fired. The teachers, likewise, are basically invisible to students, so they are in an excellent position to eavesdrop and spy without notice, as well as share information that vulnerable students bring to them in confidence.

The twist, interestingly, also allows us to see the social dynamics at play at the Constance Billard school from the teachers’ perspective, which in some ways makes the students the immediate antagonists while the teachers — who are often petty and quick to cross ethical boundaries — as the characters with whom we most empathize. It’s a smart play if you’re trying to win over fans of the original GG, who are now a decade older, but it does create a remove with the student characters we are supposed to care about the most.

Not that those characters are particularly interesting to begin with. The pilot introduced some fairly dynamic vessels with which to work, but over the first six episodes, the writers have given them very little depth while the storylines themselves have already fallen into a stale pattern. There are essentially two love triangles. In triangle A, the school’s Queen Bee, Julien Calloway (Jordan Alexander) is an influencer and an aspiring Kardashian who helps facilitate the transfer of her half-sister, Zoya (Whitney Peak) (who is poor — “poor” being relative here) to Constance Billard, only to see her boyfriend, Obi (Eli Brown) — the activist son of a Rupert Murdoch type — fall for the much younger Zoya (the character is 14 in the show, which is … weird given the adult nature of the series).

Julien is initially stoked to be united with her sister, but after Zoya and Obie begin dating, social dynamics come into play, and the first few episodes basically amount to Julien trying to destroy her half-sister only to regret doing so by the end of the episode and vowing never to do it again only to do it in the very next episode. Zoya, meanwhile, struggles to stay true to herself, and each time she gets in a pissing match with Julien, she loses a piece of her identity, the very identity that Obie is attracted to. Obie tries to keep Zoya grounded only to lose his own footing while his affection backslides toward Julien. Like I said, I’ve never seen the original series, but it was on The CW, and this all plays out like every other CW soap opera.

There have only been six episodes, so far, but they have all traveled predictable routes, and whatever notions the series had about dabbling in socioeconomic issues is as superficial as the rest of the series. In fact, the parents are far more interesting than the students, particularly Julien’s father (the very handsome Luke Kirby) and Zoya’s father (the very handsome Johnathan Fernandez), who had children with the same woman and who hate each other, at least for half an episode before they come together for the good of their daughters. It’s a shame they aren’t involved in the threesomes. Laura Benanti also plays the mother of Audrey; her failing businesses have driven her to drink and she and Audrey are knocking on the door of the poorhouse (“poorhouse,” again, being relative).

I found the series exhilarating for about an episode and a half, because I thought there was an opportunity to at least be something akin to Succession set in high school. It soon began to wane, however, and by the midseason, it was basically a less interesting (though more coherent) Riverdale with no mystery and a lot more f**king.

← Conan Used Amazon To Pull A Prank On His Employee | Review: Aretha Franklin Biopic 'Respect' Serenades the Queen of Soul in a Familiar but Well-Executed Tale →