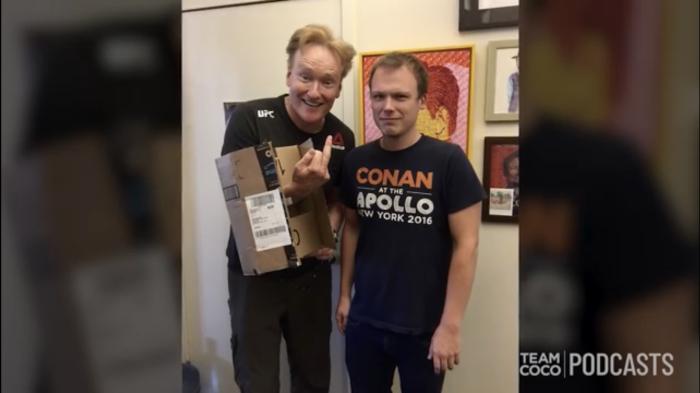 Conan Used Amazon To Pull A Prank On His Employee

Is there a better boss to work for than Conan O’Brien? He would prefer that you say no. In fact, you should be showering him with praise! Conan needs compliments. He feeds off of them. Cut to a recent episode of Conan O’Brien Needs A Friend. O’Brien asked his employees Matt Gourley and David Hopping to shower him with praise. Hopping took the compliments to a place no one saw coming.

When you think of complimenting your boss, you likely think of something mundane. You say they’re nice. Maybe you tell them they have a cool car. Perhaps you praise their general demeanor. Not David Hopping. He told a story of Conan’s pranking abilities. Specifically, a time when Conan cut a hole in an Amazon package and waited for David to open it. He then proceeded to flip off David through the box.

It’s clear by how they discuss it that it was all in good fun. Even the corresponding picture is delightful. It’s odd to think a compliment would end with “then you flipped me off.” But, with Conan being … Conan, it actually makes a lot of sense. I’ve worked for plenty of bosses with zero sense of humor. This is preferable. There’s something absurd about a boss doing something like this in such a manner.

It’s been made clear over the years that Conan is loved by his employees. One of them telling this story for this purpose cements that fact.

← The Morning Briefing: A Democratic Pissing Match, the Census, and the Pandemic | A Midseason Review of HBO Max's 'Gossip Girl' Reboot →