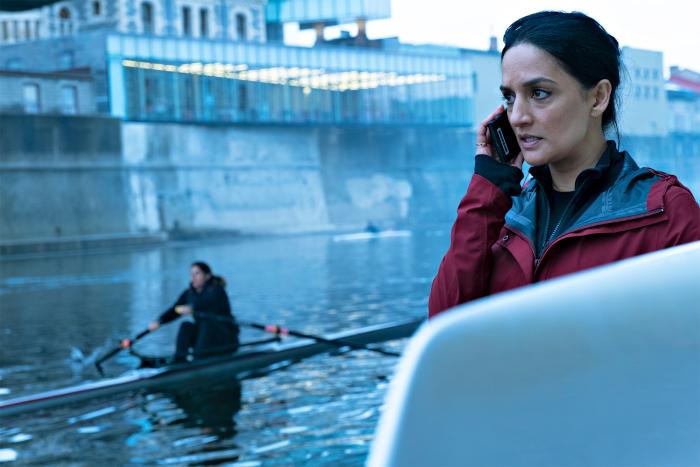 Peacock’s Departure is another one of those international series that NBC/Universal’s upstart streaming network, Peacock, licensed to fill space during the pandemic. Departure is a British/Canadian series, commissioned originally by Canada’s Global, and it features a number of familiar faces whose names are all right on the tip of your tongue: Archie Panjabi, Christopher Plummer, Claire Forlani, and Dougray Scott, among others.

It’s a fairly impressive cast, and there’s enough competence in the writing early on to suggest that the series could live up to a cast that collectively is better than its IMDb credits. Unfortunately, the talent obscures what is ultimately a disaster in the making. The series is about the mystery behind a missing plane. Panjabi plays Kendra Malley, who’s the missing plane investigator! She, however, has a past of her own: a husband who died in a car crash under vague circumstances, and a teenage step-son that she essentially inherited. He’s a surly Dana Brody and an emotional black hole.

A passenger plane goes missing over the Atlantic Ocean, and Malley is assigned to find it. There is no debris floating in the ocean to speak of, but at the end of the first episode, she does find a survivor. I won’t say anything else, except that how this woman survives is a hint of what’s to come: Basically, a hole opens up in the side of the plane as it’s careening toward the ocean, and she and another passenger fall straight down into the water along with a life raft. How fortuitous! The life raft is silly, but I couldn’t get over the fact that the survivor essentially floated down from the plane at a 90-degree angle; there is no trajectory to her fall, despite being sucked out of a plane traveling at a few hundred miles an hour.

The fact that there is a survivor and no debris, however, is imminently intriguing, and I quickly barrelled through the remaining five episodes to find out what happened. It was clear by the end of the second episode — when a manned submarine imploded under the pressure of the ocean while trying to collect the plane’s black box — that Departure wasn’t going to be any damn good.

The series clumsily traverses through a number of red herrings: Terrorism, government conspiracy, and the old standby: The pilot took his own life (and those of everyone aboard the aircraft) because his wife found out that he was married to a man and had a second family. It is a spectacularly unsatisfying reveal, however, and makes sitting through the five episodes preceding it feel like suffering through a six-hour haircut with a nattering hairdresser only to find out that you are bald. Again, I won’t spoil too much (but spoilers), except enough to hopefully dissuade you from watching, which is to say: The reveal involves the in-flight entertainment system, a ball they had hidden behind a potential suspect named “Moses,” which turned out to be an acronym, M.O.S.E.S.

I’m not saying that Departure is as bad as the similarly themed Manifest — there are no supernatural elements, for instance, and Departure occasionally makes sense — but as conspiracy thrillers go, even though it’s licensed from abroad, it’s the kind of thing viewers would expect to see on broadcast television during primetime. That’s not a compliment. It’s a very American series, and by that, I mean: It’s very dumb.