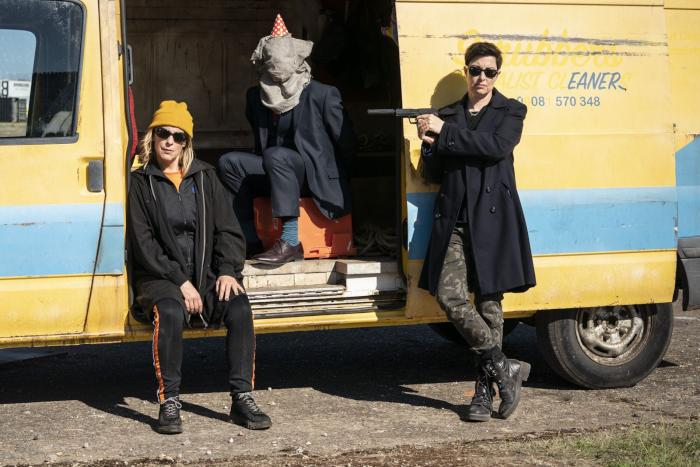 Fans of Sue Perkins and Mel Giedroyc from the various British projects, both together and apart, will undoubtedly enjoy their latest series, Hitmen, a British series being rebroadcast on Peacock. It’s basically like taking the sweetly charming sensibilities of their iteration of >The Great British Bake Off and applying it to a series about … two assassins.

Mel and Sue play Jamie and Fran, respectively, who spend most of short six episodes in the series inside a van, often with their latest target assigned to them by their boss, Mr. K. They chat amiably, get into some hijinks, and occasionally shoot people in the head and drop their bodies into a canal. When they get into trouble, they have to call their arch-nemeses Liz and Charles (Tonya Cornelisse and Asim Chaudhry) to come bail them out. Liz trolls them, while Charles basically just wants a hug (and Asim is a delight!). They’re all very likable; even the bad guys/targets are not heinous individuals, although they often turn briefly nasty right before they are killed, so we don’t feel too bad about their deaths.

Mostly, Hitmen is a friendship comedy between two best friends since high school who just happen to kill people for a living. It’s an amusing premise, although not quite as funny in execution. It’s still entertaining, even if it is completely insubstantial. The chemistry between Mel and Sue is well established, and while Hitmen is an easy way to enjoyably pass the time, there’s not much more to it than that. For a show about paid killer, it is incredibly light. Still, it may be a “hoot,” but it is well short of a “laugh riot.”

← Sarah Cooper Guest Hosting 'Jimmy Kimmel: Live' Is the Feel-Good Story We Need | Reddit Asks: What Have You Accidentally Conditioned Your Pet To Do? →