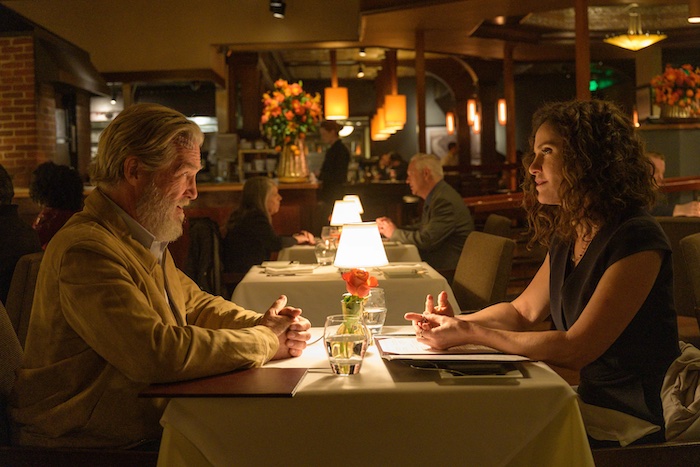 On This Week's 'Old Man,' Hell Hath No Fury Like a Depressed, Middle-Aged Divorcée

Dan Chase has led a hell of a life. As a CIA agent, he killed many a Russian; he stole an Afghan warlord’s wife, and used his relationship with an FBI agent to go underground for 30 years where he fathered a daughter. After resurfacing, he killed two FBI agents (so far), took out a contract killer (at least for now), shot down a surveillance drone, and disappeared again.

But a depressed, middle-aged divorcee has Dan Chase by the balls.

In this week’s episode of Old Man, after removing Zoe from his trunk, Dan Chase explains to her that he kidnapped her for her own good because the professional hired to kill Chase would almost certainly kill Zoe. She seems to accept this as true but nevertheless refuses to talk to Dan as they travel to his safe-house in Los Angeles. There, Dan starts to put together his plan: Everyone has an enemy, and he presumes that there are people who want to kill Faraz Hamzad. Instead of doing it himself, Chase schemes to gain the attention of someone else (through a large stock transaction), whom he will presumably alert to Hamzad’s location. First, he has to push it through a smug, snot-nosed adviser (played by Bridges’s nephew, Jordan Bridges) who treats Chase like a relic at the very company Chase built. Rarely have I hated a character so much in so little time.

Then Chase has to contend with Zoe, who finally decides to speak after living in Chase’s lavish safe house for a few days, where he has her living under the assumed identity of Marcia Dixon, wife to Chase’s assumed identity, Henry Dixon. Chase offers Zoe $500,000 for her troubles — being kidnapped, held captive, and forced to pet sit the dogs, drink wine, and watch cooking shows — but Zoe, having seen what Chase’s “safe house” looks like, has decided she wants more. Much more — enough to make him uncomfortable. She gives Chase two options: Give her half of everything he owns and she’ll promise to remain quiet and disappear, or give her half of everything he owns and make her a partner in his schemes. If Chase does neither, Zoe has written an email that will be sent asking for a fake divorce from her fake husband, and a divorce — even a fake one — would upend all of Chase’s plans. Chase doesn’t take kindly to her blackmail, but he also clearly doesn’t want to kill her. After being gaslit and dismissed by her ex-husband, Zoe rightfully wants to be “accounted for,” and accounting for her comes at a steep price.

Elsewhere, Alia Shawkat’s FBI agent Angela is making her move, too. We find out more about her relationship with Harper, although not too much more. It still remains vague: She was close friends with his late son, Chip, maybe had some sort of relationship with the mother of Chip’s son, Lily, and she’s close with Harper’s grandson, Henry, whom she used to babysit. She also once punched a superior in the face for calling her “freckles,” and Harper reinstated her an hour after she was fired. Angela not only owes Harper but clearly has a lot of fatherly affection for her mentor.

That, plus the fondness she has for her life as an FBI Agent, is also the reason she declines to “disappear” after her father, Chase, insists she do so to avoid the wrath of Hamzad. After egging Harper to bring up her mom, Belour, in a conversation with Hamzad’s attorney, Harper is asked to hop on a plane and meet with Hamzad to discuss with him what he knows about Chase and the wife who left him. Harper feels he has little choice but to agree, while Angela decides to join him out of loyalty, but also so that she can get more information about Hamzad to take back to Chase.

She also may want to kill Hamzad personally because the man is responsible for a lot of bad sh*t in her life. He’s the reason she had to live underground, had to join the FBI under an assumed identity, and the reason her only relationship with her father is over the phone. I wonder, too, if Hamzad may have been involved in the deaths of Harper’s son and Lily?

The backstory on Hamzad, Chase, and Belour in Afghanistan is still opaque. We learn that Belour warned Hamzad not to retaliate against a Russian military unit that brutally murdered a number of people in their Afghan community. Hamzad did not appreciate the Russians getting too close to killing his wife. In what seemed the beginnings of a dick-swinging contest, however, Chase took matters into his own hands and went Rambo on a bunch of Russians and brought back some human trophies for Hamzad in what felt like a bid to impress Belour.

Finally, the contract killer Julian Carson — who barely survived his attempt to kill Chase — informs Harper that there is a mole in his midst who must have alerted Chase ahead of Carson’s visit. I can’t tell what Harper’s expression in reaction to that news meant: Was he surprised to learn there was a mole or did that raised eyebrow suggest he knows that either Waters or his own protege, Angela, is the mole? Before Harper gets on the plane with Angela to meet Hamzad, he says something to Waters that suggests maybe he suspects it is Angela, whom he considers a daughter. “One day, [if you have kids],” he says to Watters. “When the time comes for them to break your heart, remember I told you this: The moment you let them in, you were asking for it.”