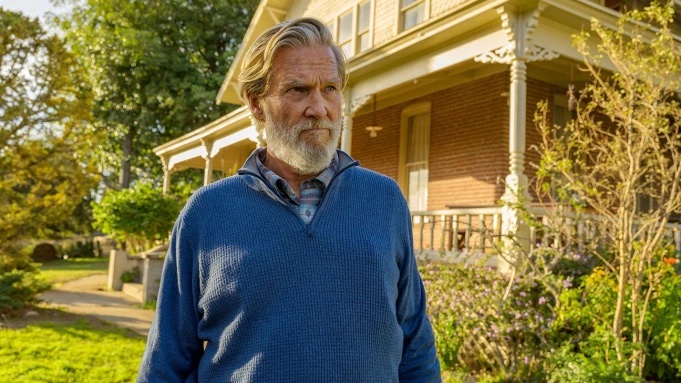 'The Old Man,' Like a Geriatric Urine Stream, Is a Satisfying Slow Burn

In The Old Man, Jeff Bridges plays Dan Chase, a former spy who has been out of the game for 30 years after changing his identity and retiring to a quiet life with his wife and daughter. Three decades later — and not too long after the death of his wife — Dan is a creaky old codger who lives with his two dogs, Dave and Carol, and mostly worries that his mind might deteriorate as he ages. After a break-in, Dan realizes that his 30-year-old secret has been uncovered and — after dispatching a hitman and making it look like a home invasion — Chase up and leaves his old life behind.

Harold Harper (John Lithgow), FBI’s Assistant Director for Counterintelligence, is called back into action while still grieving the deaths of his son and daughter-in-law, who left behind a child that Harold and his wife have to care for. Harper has history of an unclear nature with Chase and is upset to see him resurface, because whatever secrets Chase holds can do some damage not only to the FBI but to Harper himself.

Harper calls Chase as a courtesy and gives him two options: Harper can send his FBI goons to kill Chase, or Chase can “disappear” again, but doing so this time will mean ending all contact with his daughter, with whom Chase is close. Because it wouldn’t be much of a show if he chose the latter, Chase decides the risk of being killed is worth maintaining his relationship with his daughter, whose identity and whereabouts are unknown to the FBI. And so begins the pursuit.

It’s something that neither Chase nor Harper want. They’d have been happier if his cover had never been blown, but Harper’s job requires that he track him down while Chase’s life requires that he kill anyone who comes for him. The cat and the mouse reluctantly resign themselves to the chase. Meanwhile, Dan finds a place to hide out in the guest home of Zoe (Amy Brenneman), a lonely and depressed woman who finds comfort in Dan’s presence, though she doesn’t realize that Dan would kill her in a split second if it meant saving his own life.

In flashbacks that slowly begin to fill in the backstory, we see Harper — 30 years in the past — working with Chase behind the back of the FBI, and I expect that it’s this arrangement that gave Dan the leverage to use Harper’s resources to help him quit the game, leaving behind a lot of secrets that are about to be unburied.

It’s a simple cat-and-mouse premise, and the motivations are almost beside the point. The Old Man is less about the twists and turns of the spy genre and more of a showcase for Bridges and Lithgow, who are as good as they always are. Chase is Liam Neeson in Taken by way of The Dude — creaky, laconic, but with enough strength and fight left in him to take on the FBI — while Harper is the more cerebral of the two, tasked with the delicate mission of taking out his old friend without uncovering any incriminating secrets.

It’s an almost immediately engrossing series, and it’s almost impossible not to invest in both characters, who — like our own allegiances — are on a collision course with one another. Brenneman is likewise terrific, while Alia Shawkat plays an FBI agent under the command of Harper. She’s someone I suspect has her own secrets and is more deeply connected to the case than we are let on.

There’s not a lot in common between Apple TV+’s Slow Horses and FX’s new series The Old Man, but I like to think that they’re both part of a trend in television where spy novels are adapted to take advantage of talented actors instead of huge FX budgets. The always reliable Gary Oldman anchors Slow Horses, while Bridges and Lithgow square off both with and against each other in The Old Man. They’re also similar in that both shows are paced languidly — better to take advantage of their older stars — without sacrificing either tension or suspense. Indeed, The Old Man — like Slow Horses — is like a geriatric urine stream: Slow burning but satisfying as hell.

← For 'Crimes of the Future,' Cronenberg Dusts Off his Old Self to Reflect on His New, Older Self | Will Chris Pratt's Mario Voice Be Offensive to Italians? →