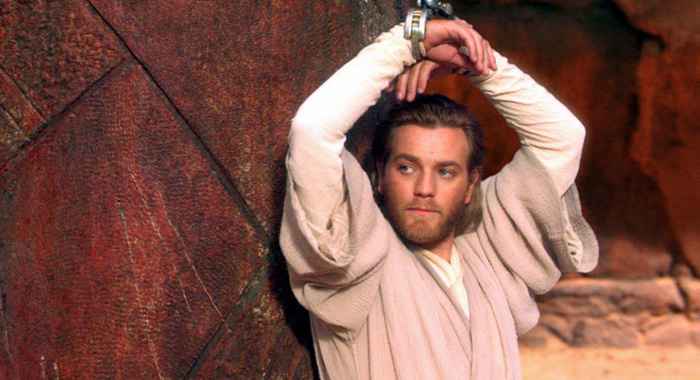 Last Friday, rumors started swirling on Twitter that the Obi-Wan Disney+ series was in some serious trouble. Birth.Movies.Death. even went so far to hit publish on a post saying the whole thing was canceled before quickly pulling it down. (Yup, hi, I saw that.) But despite widespread speculation fueled by “parody accounts” that Ewan McGregor had exited the project over creative differences, nothing official ever emerged, and the whole thing was chalked up to Twitter being Twitter albeit with a caveat that there was legitimate chatter about the series being rewritten. Turns out that last part was on the mark because Collider broke the news that Lucasfilm has paused on production to address Kathleen Kennedy’s concerns with the writing.

Two independent sources with knowledge of the situation tell Collider that the Obi-Wan series has been put on hold, as the crew that had assembled at Pinewood Studios in London was sent home. A timeframe was not given, but the crew was told that the show would be down “indefinitely.”

We’re hearing that Lucasfilm president and Obi-Wan producer Kathleen Kennedy was not happy with the scripts. Sources tell us that what will most likely happen next is the scripts will be reworked with the hopeful goal of reassembling this summer, but there’s always the possibility that that timeframe could shift.

Shortly after Collider’s exclusive hit, The Hollywood Reporter confirmed that the Obi-Wan series is on hold and that writer Hossein Amini is officially off the project. Apparently, there were only two episodes written, but that was enough for Kennedy to pull the plug and start from scratch with a new edict that the show would only be four episodes instead of six. As for what was wrong with the original story, well…

It is unclear why scripts became an issue so late in the process. One source said the Kenobi story trod similar ground as The Mandalorian, seeing the Jedi master lending a protective hand to a young Luke and possible even a young Leia, perhaps mirroring how the Mandalorian took Baby Yoda under his protective custody.

Look, I’m just a guy who writes about gun-crazy assholes that may or may not have shit themselves at a party. I don’t run a major Hollywood studio, but I feel like this is the sort of problem that probably would’ve been caught early on.

Jokes aside, at this point, it’s important to note two things. One, showrunner Deborah Chow and McGregor are still attached to the project. Two, the situation is very fluid because in the middle of writing this post late Thursday night, McGregor spoke to IGN during a Birds of Prey event and did his best to put out any fires. However, in the process, he claimed that Obi-Wan would still hit its original release date but wouldn’t start shooting until January 2021 and not this summer as previously reported. OK…

“It’s just slid to next year, that’s all. The scripts were really good. Now that Episode IX came out and everyone at Lucasfilm has got more time to spend on the writing, they felt they wanted more time to write the episodes.” McGregor said. “I’ve read about eighty, ninety percent of what they’ve written so far, and it’s really, really good. Instead of shooting this August, they just want to start shooting in January, that’s all. Nothing more dramatic than that. It often happens in projects, they just wanted to push it to next year. It will have the same release date, I don’t think it will affect the release date. They are still shooting towards having the film release when it was going to be originally.”

IGN also reports that McGregor hasn’t heard anything about the series being knocked down to four episodes, so there’s a good chance Ewan might not be entirely in the loop. Although, he sure seemed good to go last night.

I don’t know. He looks pretty ready to play Obi-Wan with that hair. pic.twitter.com/jm8n4ZpRVF

Naturally, in the course of all of this Kathleen Kennedy is getting raked over the coals on Twitter despite the fact that she’s doing exactly what everyone wishes she would’ve done with Rise of Skywalker by focusing on story instead of a release date. The woman can’t win. Hell, this is a comment that’s trying to defend her on BMD’s Obi-Wan report, and it still ends up stepping on its dick and falling face-first into nerdboy sexism.

She’s Pepper Potts. And Pepper is awesome. She keeps things together, puts out fires, makes hard decisions based on the big picture and has the grit to make great opportunities happen. But there needs to be a Tony Stark with a driving vision (but hopefully less impulsively destructive decision making than Stark) to provide the roadmap of where they are going. Funny thing is, Happy Hogan is available and actually knows how to spin a yarn.

You either get why that comment is supremely f*cked up or you don’t. I’m not gonna draw you a map.