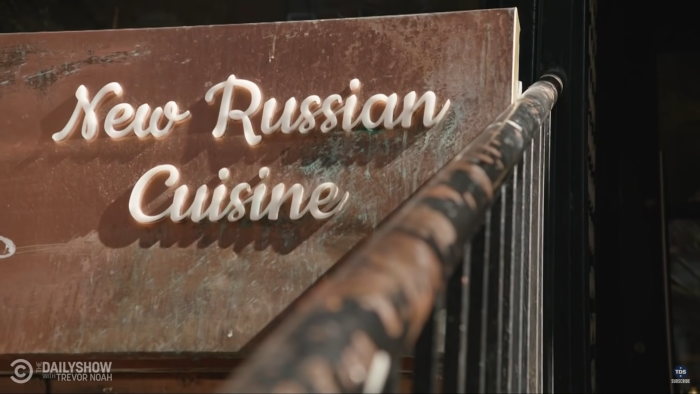 It’s 2001. An attack by a foreign power has shaken up the world. New Yorkers are taking out their anger by harassing people they believe are related to said foreign power.

With Vladimir Putin’s attack on Ukraine, some Americans have found themselves wanting to fight back. They’ve added the Ukrainian flag to their Twitter handles and recited poems by Bono. Now, as shown on The Daily Show by correspondent Desi Lydic, they’re boycotting and threatening Russian restaurants too. Yes, there are Americans who are outright supporting Putin, but something about misguided “activism” of berating Russian American citizens leaves a bad taste in my mouth.

Part of it is that I feel New Yorkers should know better. I love my city. I love that I can walk down the street and run into people from all over the world. I can try authentic foods from foreign lands and experience art I may have otherwise never known existed. It is a melting pot in the best sense of the term. Unfortunately, people have a way of forgetting that when things get rough.

I wish I could say the people harassing restaurants weren’t “real” New Yorkers, but that’s just too wide a net to cast. It’s probably a mix. Some were probably born and raised here; others leave as soon as it gets cold. The thing they have in common is that they are attempting to protest in a way that is fueled by ignorance. They turn their backs on their neighbors when they should be supporting them. It’s sad, but it is not relegated to one type of person.

Ignorance is hard to combat, and it has been that way for a very long time. You can’t force someone to learn and grow as a person. But you can do your part and support people who are hurting. You can take your anger out on the right people, and the right people are not the ones who moved to this country hoping for a better life.


← 'Winning Time': Did a Dead Body Derail Jerry Tarkanian's Chance to Coach the Lakers? | 'Riverdale' Returns, and It's Just Laughing at Us Now →