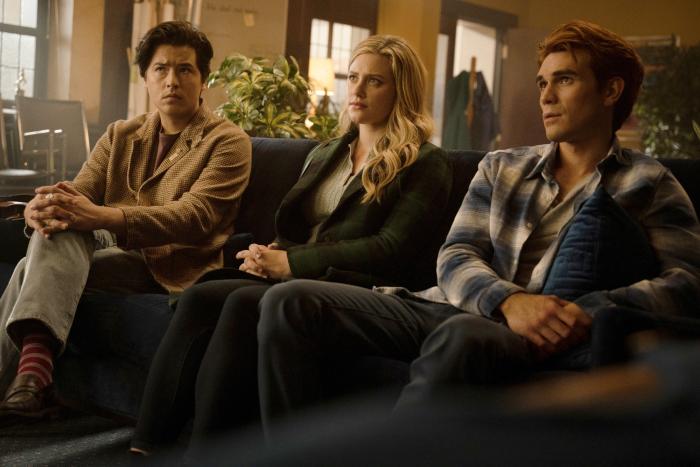 'Riverdale' Returns, and It's Just Laughing at Us Now

It was nuts, but what happened in Rivervale mostly doesn’t matter, because it was a pocket universe. What does matter is that Hiram Lodge set off a bomb in Archie’s house that more or less ends Rivervale. The bomb, however, has some unforeseen consequences in Riverdale.

Somehow, Archie and Betty survive the explosion despite being in the house when it’s blown up. We soon learn that it’s because the bomb has given both Archie and Betty — who recall is now in her mid-20s and working for the FBI — some inexplicable superpowers. Yes. Superpowers. Betty survived the explosion because Archie wrapped his body around hers and, as it turns out, Archie is basically impenetrable. He’s Superman without the ability to fly (so far).

Archie soon learns from Toni (who is now romantically involved with Fangs) that Twyla Twist and the Ghoulies planted the bomb on Hiram’s orders. Archie quickly takes care of Twyla and the Ghoulies. By himself. Because he has superpowers.

Betty’s superpower, meanwhile, is the ability to detect when others are threatening; she sees a red glow around them. She uses this superpower to solve a murder, ruin the career of a co-worker who was sexually harassing her, and change her FBI unit to an all-female team. (The co-worker, Glen, is subsequently killed by the Trash Bag Killer for messing with Betty).

Betty and Archie seem happy with their superpowers. I should also mention that Archie bought his house from his mother, although a guy named Percival Perkins — a fancy man who may or may not be evil — tried to convince Archie to sell it to him. Also, Bingo — Archie’s dog — broke all four legs in the bombing, but they all magically healed within three days because the dog has superpowers, too.

Elsewhere, after Veronica learns that Hiram planted the bomb in Archie’s house, she puts a hit out on her own father. After the father of Reggie (the current one, and not the one from 13 Reasons Why) has a health scare, Veronica has regrets and tries to call off the hit. It’s too late. Hiram is dead (Mark Consuelos, who plays Hiram, has left the show). Learning of the hit, Veronica’s angry sister, Hermosa, “marks” Veronica. OK.

Jughead, who was in the garage next to Archie’s home when it exploded, did not develop superpowers (yet). In fact, he experienced the opposite. He now has hearing loss in both ears, but he’s still frantically working away as Riverdale’s journalist, reporting on the demise of Hiram Lodge. (My theory is that Jughead will end up becoming the deaf version of Daredevil.)

Finally, some may recall that Abigail Blossom — in 1890 — was burned to death after the townspeople accused her of being a witch. She, in turn, cursed the town. The Blossom family has been lighting magic candles to reverse the curse, but Abigail, who is now possessing the body of Britta, keeps trying to blow them out. Cheryl seeks the help of her grandmother, Nana Rose, to banish Abigail from Britta, but the banishment spell that the sneaky Nana Rose uses actually allows Abigal to possess Cheryl.

To sum up: Archie and Betty have superpowers; Veronica has been marked; Jughead has lost his hearing; Cheryl is being possessed by Abigail, and the Trash Bag Killer is very protective of Betty. Welcome back, Riverdale.