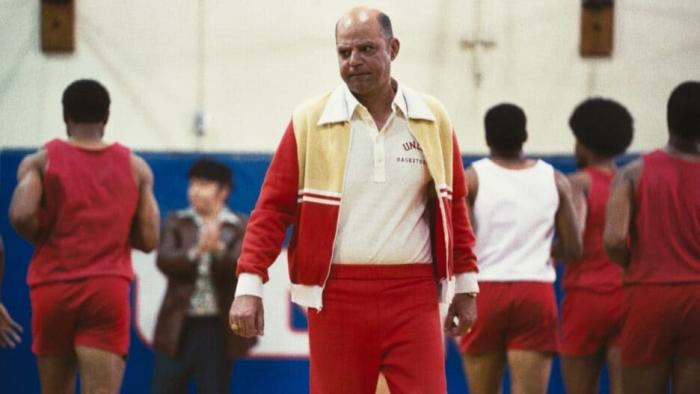 I was under the very wrong misconception that Adam McKay’s HBO series Winning Time would cover the Los Angeles Lakers’ entire Showtime era as a limited series. That’s clearly not the case. Three episodes in, and training camp for the 1980 Lakers hasn’t even begun, nor has new owner Jerry Buss (John C. Reilly) found a new head coach to replace the outgoing Jerry West. (There are 10 episodes in the first season, and based on the title of the season finale, “The Promise Land,” I’m guessing the television season ends at the end of Buss’s first season as owner).

In fact, the last two episodes have been as much about losing Jerry West and searching for a new coach as it’s been about Magic and Kareem (the latter of whom has only appeared briefly). That search will last for at least one more episode, which will see a near-tragedy before the Lakers finally land a more permanent coach (and though Adrian Brody’s Pat Riley is introduced in this week’s episode, the man best known as the coach of the Lakers during their ’80s heyday won’t actually become the head coach for a couple more years).

With Jerry West leaving, however, Jerry Buss decides to turn to yet another Jerry to take over head coaching duties: Jerry Tarkanian. Fans of the NCAA may remember Tarkanian as the coach of the dominant UNLV Runnin’ Rebels, a team with Larry “Grandmama” Johnson that dominated the league from 1989 until Tarkanian retired in 1992 after the Rebels were banned from competing in the NCAA Tournament due to recruiting violations. They were terrifyingly good. Tarkanian, as befitting a coach in Las Vegas, also frequently ran afoul of the NCAA (two years prior to the events depicted in last night’s episode, Tarkanian was suspended as the coach of UNLV for two years, but he was reinstated after a Nevada judge issued an injunction that would remain in effect until the case was heard in 1988 by the Supreme Court).

The point is: He was a very good coach, but he also ran with some shady figures, namely a sports promoter named Vic Weiss. Weiss was a gambler, he ran with the mob, and on the side, he acted as Tarkanian’s agent as a favor to Tarkanian (there’s probably no point in getting into the fact that Tarkanian’s unofficial “agent” was a degenerate gambler because this story is shady enough).

As depicted in Winning Time, Weiss was at the table with Jerry Tarkanian and Jerry Buss negotiating a deal to make Tarkanian the new head coach (this actually happened around the time that Magic was being drafted, while Jack Kent Cooke was still transitioning out as owner — in fact, in real life, Cooke was also at that table). The details were scribbled out on a napkin, and after the dinner, everyone went home assuming that Tarkanian would become the new head coach. Tarkanian awaited a phone call from Weiss to iron out the contract. However, that phone call never arrived. Three days later, Weiss was found in a parking garage in the trunk of his own Rolls Royce with two bullet holes through his head.

The murder still remains unsolved, although investigators believe they know the motive. Weiss not only had $60,000 in gambling debts but he was apparently skimming off the top of laundered money he was delivering to mobsters in Vegas. I’ve watched enough Scorcese movies to understand that stealing from the mob is never a good idea.

Police spent years investigating the murder, only to see other potential suspects wind up dead themselves (Cooke, Buss, and Tarkanian were quickly eliminated as suspects, in case you were wondering). Someone inside the police force leaked details to the mob about the investigation making it even more difficult. Some believe that the men who killed Weiss were themselves killed in order to maintain the mob’s silence.

In any case, the death of Weiss left Tarkanian shook for obvious reasons. The Lakers ceased negotiations, and soon thereafter hired another coach (which will be covered in next week’s episode).

For the record, Tarkanian did eventually get an opportunity to coach in the NBA. After leaving UNLV in 1992, he coached the San Antonio Spurts for 20 games. He was 9-11 and quickly fired over disagreements with ownership. In 1995, Tarkanian took over as coach of Fresno State before retiring in 1992. His team was placed on probation after he left for NCAA violations committed while Tarkanian was coach. He died in 2015.


← There's Too Much Going On And It's Also Monday, So Here's Some Dogs Stopping Football Matches | New Yorkers Are Taking Out Their Anger At Putin On Russian Restaurants →