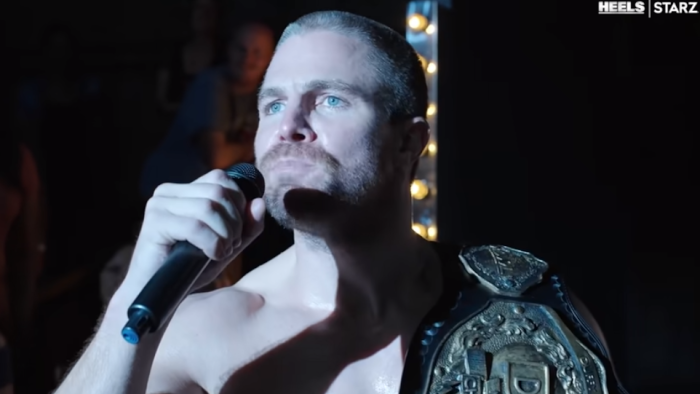 Netflix Should License the Most Underappreciated Gem of 2021 from Starz

The wrestling drama Heels aired its first season finale last night, but I don’t want to say anything about the series beyond what I wrote about it in my review ahead of the premiere — it’s phenomenal, Friday Nights with wrestling, and one of the best shows of the year. Typically, one might recap an episode so to give space for those who watched a piece to either reinforce or contradict their opinions, offer insights, or simply give viewers a space to discuss.

I don’t want to do that here because, based on the ratings I’ve seen, Heels — starring Stephen Amell and Alexander Ludwig — was not a highly viewed series, seen by fewer than 100,000 people a week, so there are very few with whom to discuss the finale. Granted, that’s not a bad number for Starz, where its most popular series, Outlander, scored fewer than 100,000 viewers for each episode of its most recent season (although, Outlander has achieved as many as 1.72 million viewers in past seasons). Starz has about 9.5 million U.S. subscribers, so the Heels audience represents nearly 10 percent of its subscriber base.

Still, Starz has not made a decision on whether to renew Heels for another season, though creator and writer Michael Waldron (Loki, Doctor Strange in the Multiverse of Madness) is open to it and has several ideas for how to approach it.

It’s a terrific, heartfelt, brilliantly written, crowd-pleasing, and incredibly satisfying season of television with an outstanding twist I did not see coming. It deserves another season. It also deserves a bigger audience. This is genuinely the kind of show — like Ted Lasso — that has a chance to break out in a big way if more people had the chance to watch it. I am thankful that Starz picked it up and gave it a home, but I’m not entirely sure that Heels a a perfect fit for a streaming service whose most popular shows are Power, Outlander, The White Princess and the recently canceled American Gods (genuinely, there’s probably more crossover between Heels and the forthcoming reboot of Party Down than these other dramas).

I am sure there are a number of contractual concerns that would have to be ironed out, but Heels would be perfect for the Netflix audience looking for a great, feel-good binge. It might only attract wrestling fans initially — of which I do not include myself — but word of mouth (this show has a 96 percent Rotten Tomatoes score, and a 97 percent audience score) could expand its audience well beyond that base. Heels is about wresting the same way that Friday Night Lights is about football. The sport exists to tell stories about characters, not unlike G.L.O.W., another underdog wrestling drama that was a big hit for Netflix (it was canceled due to the pandemic and the expense of shooting a show with that much physical contact with COVID restrictions and not because it was unpopular).

Heels could be the next Manifest for Netflix only, like, good. There’s a lot of great television airing right now, but too many of the best shows often go unseen because viewers don’t want to pay for another streaming service (see also Evil, which aired its second season finale this week on Paramount TV). Netflix obviously has a proven track record for turning cult hits into mainstream ones (see Breaking Bad), and licensing deals like this would prove a boon to both Netflix (more great content) and Starz in terms of a bigger audience. It’s worked for both Outlander and Ash vs. Evil, both of which I suspect are probably watched more widely on Netflix than their home network, and it would definitely work for Heels, a show that deserves more than to shine in obscurity.


← 'The Walking Dead' Winter Finale Ends with a Cheap, Pointless Cliffhanger | As Lies Go By: How To Give Yourself a False Memory →