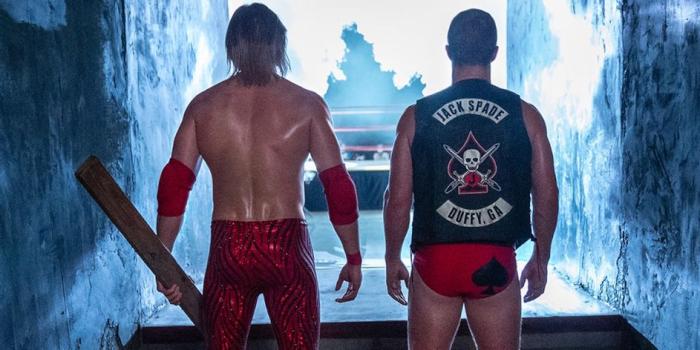 Recap: 'Heels' Is a Show About a Small-Business Masquerading as a Wrestling Drama

I don’t know a lot about wrestling, but I have read enough to understand that, in Heels, the small, local Duffy Wrestling League is something of a relic of the past. Even in the world of wrestling, everything has been merged and consolidated by corporate America (and this is an issue in wrestling that the series will touch upon in future episodes). Still, what I think I appreciate the most about Starz’s new drama, Heels, is that it’s really a show about how to keep a small, struggling family business alive. The Duffy Wrestling League is a mom-and-pop outfit trying to survive in the face of stiff competition from more moneyed interests who are also trying to either run the Duffy League out of business or absorb it (the fantastic Mike O’Malley, who is the showrunner on Heels, also plays Charles Gully, the head of the Florida Wrestling Dystopia, which is the Duffy League’s most immediate threat).

It’s easier, then, to make sense of how the pilot episode of Heels goes down if you put it in the context of trying to maintain a small business. Jack Spade (Stephen Amell) inherited the Duffy League from his father (whose devotion to the league may have cost him his life). His facility is falling apart. He can’t afford all the newest gadgets, and his wife, Staci (Alison Luff), has to cut coupons so that he can afford the basics, like smoke machines. The Duffy League is not a full-time job for any of them. In fact, one of Jack’s biggest draws, Big Jim Kitchen (Duke Davis Roberts), announces in the pilot that he’s retiring so that he can take more shifts at his day job so as to support his new baby (as a site runner of one of the very few remaining independent sites, this all feels vaguely familiar).

That’s the backdrop to the drama that takes place between the series’ two central figures, Jack and Ace Spade (Alexander Ludwig). Ace is an entitled sh*thead who is still living in the glow of his high-school football days. He’s an asshole (and his exchange with a cashier is the perfect way to illustrate that), but in the wrestling ring, he is a hero, and so that is the way that much of the Duffy community sees him. He’s also being scouted by Wild Bill Hancock (The Wire’s Chris Bauer), the one guy who escaped the Duffy Wrestling League and made it to the big time.

This presents a dilemma for Jack, the Duffy League’s owner, writer, and heel (or villain), who is set to defend his title during the main event at an upcoming match, an especially fraught dilemma because Ace is his brother and the star of the show. If Jack lets Ace win the match, Ace leaves Duffy and probably never comes back. He also gets to continue what he’s done his whole life, which is skate by without facing any adversity. More importantly, for Jack’s sake, he loses Duffy’s biggest draw. Without him or Big Jim Kitchen, the league could sink (no PTSD flashbacks to when we lost Joanna and Courtney back-to-back. Nope. None at all).

Jack’s faced with a hell of a predicament here, but ultimately decides that he’s not going to give up the belt to his brother. Wild Bill Hancock, however, has other ideas in mind. He butts in and encourages Ace to take his fate into his own hands and inject some real wrestling into a “fake” match, claim the belt for himself, and set himself up for a future outside of Duffy.

That doesn’t feel right, but what Jack ultimately does in the ring feels even worse. He doesn’t give Ace the opportunity to steal the belt. Within the first 30 seconds of the match, he for real pins Ace down, nearly breaks his arm, wins the match, and leaves Ace literally crying in the ring as he experiences — for the first time in his life — a loud chorus of boos from the crowd. Not just boos, either. They’re throwing popcorn and other things at Ace.

Wild Bill Hancock takes one look at what transpires and walks away.

Ace’s future prospects in wrestling are in tatters, and while Jack won’t lose Ace to the big leagues, he may have lost a brother, while the crowd itself not only turns on Ace but the league itself.

It’s a helluva way to set up the first season of the series. Writer/creator Michael Waldron builds his universe, takes a fragile situation peopled with characters for whom we can already relate, and then shatters that world. I can’t wait to see how he digs himself out of that hole.

— If the voice in the theme song sounds familiar, it’s because you’re probably a Band of Horses fan. That’s the singer of Horses, Ben Bridwell, who worked with composer Jeff Cardoni to come up with a suitably evocative theme song. I’ve already listened to it half a dozen times. (I’m less impressed with the opening titles.)

— The pilot is appropriately centered on the two brothers. But don’t worry, the rest of the cast will get plenty of time and, in particular, the women of the series: Alison Luff, Kelli Bergland, and Mary McCormack. We can already see the tea leaves in Bergland’s character, Crystal (the valet): She wants to wrestle (and I want to see her wrestle). Without saying why, I’ll say that Chris Bauer — a sort of Jamie Tartt character — will also be around plenty. Luff is probably my favorite character — she’s a longtime stage actress who’s had several stints on Broadway, and that comes out in her musical performance at the church.

— As I mentioned in my review of the series, comparisons to Friday Night Lights are inescapable, but what it — and FNL — did best are to leave us with those bittersweet feelings. Ace got exactly what was coming to him, but goddamn, I felt terrible for him after Jack humiliated him in the ring. Crystal was dead wrong about drawing sympathy from crying. That apparently does not work in wrestling.