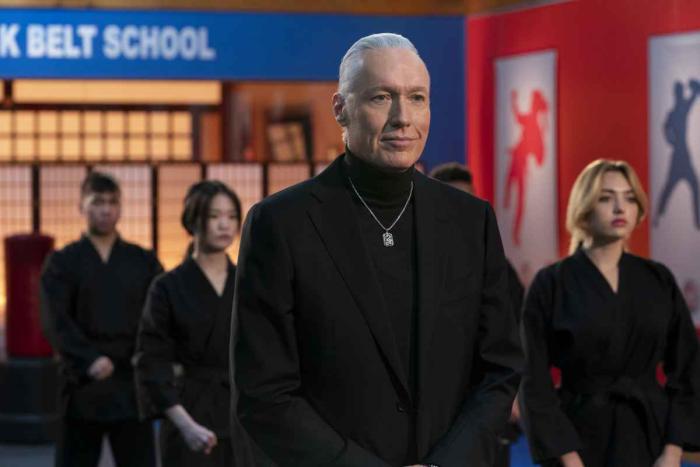 Netflix’s stock has been cratering in recent weeks after the company reported that it lost 200,000 subscribers and anticipated losing another 2 million. In response, the company has axed several shows, cut much of the animation department, and all but left their marketing blog for dead. With the bottom dropping out, the best thing that the streamer has going for it are the increasingly rare gems (like Heartstopper) amid some of the disappointing and overpriced returning favorites.

There are, however, a few bullets the streamer has left in the chamber, namely Cobra Kai, which has very much managed to hang on creatively through four very entertaining seasons (two of which originally aired on YouTube Red). The last two seasons of Cobra Kai have debuted over the Christmas/New Year’s break, but Netflix is not going to wait around this year. Now that they’re cracking down on password sharing (they asked for my phone number yesterday for verification purposes, which I suspect is how they are initially going to make it more difficult to share passwords), they need now more than ever to hang on to their existing subscribers. You do that by offering a must-see series or movie every month, otherwise subscribers with limited discretionary income are going to bounce out and subscribe to Apple TV+ or Disney+ for a month before they come back.

Enter season 5 of Cobra Kai, which is not only being released essentially four months earlier but being promoted well in advance of its release (Netflix has had a tendency to hold trailers for some of their series until weeks before their release). It worked on me! I love Cobra Kai, and this trailer — following the Empire Strikes Back ending of the last season — has me very excited for season five, if only because it looks like Johnny and Daniel are going to get in on the fighting action.

← There's Coal Left to be Dug: Let's Talk About the 'Justified' Sequel | Mike Birbiglia Wraps Up A Hilarious Week Filling In For Jimmy Kimmel →