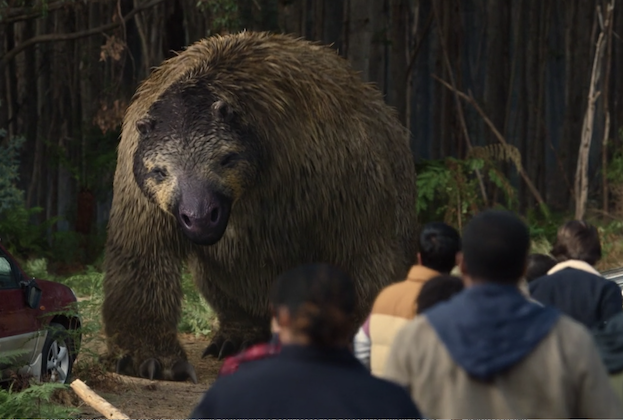 NBC's 'La Brea' Is Not Living Up to Its Potential

I’ll be honest: Three episodes into the premiere season of La Brea, and I am underwhelmed. This is a show about a group of present-day Los Angelenos who fall into a sinkhole that transports them back to 10,000 BC, and the craziest thing that happened in this episode is that a giant ground sloth (which I previously mistook for a woolly mammoth) ate some product placement (a Baby Ruth) and much of the rest of the camp’s food supplies. La Brea is spending too much time on character development — not the show’s strongest suit — and not nearly enough time on the fact that no one is freaking the hell out because they’re trapped 12,000 years in the past. Plus, there were only two bad CGI creatures in the entire episode, the aforementioned sloth and a giant bear that chased Eve and Ty into a cave, where they — along with the cop lady and her son — discovered the decomposed corpse of a dead body from the present-ish day.

Here, at least, we learn that others have fallen through the portal, and this particular fella was here for what appeared to be months or years before he “blew his brains out” because he could find no way back to the present. Eve, who is apparently a glass-half-full type, sees not despair in his situation, but hope: He managed to survive for years, which means there must be food, and food they find in the form of mushrooms that are neither the magical nor the poisonous type.

Ty and Eve also continue to bond in the episode. Eve tells Ty that the reason she wasn’t there to drive her daughter to school on the day someone else drove her and got into an accident that cost her daughter her leg is because she was having an affair (more on that later). Ty, meanwhile, confesses to Eve that he has a terminal brain tumor, which is why he had been contemplating taking his life. It will be interesting to see if they find something in 10,000 BC that will cure brain cancer.

We also learn that the rogue cop pursuing her son — the guy with a trunk full of heroin — also apparently shot (and killed?) her husband/his father, which is why the son wants nothing to do with his own mother. She claims she didn’t have a choice, which suggests domestic violence may have been involved.

Dr. Sam Velez, who was pushed off a cliff in last week’s episode by a saber-tooth tiger, cannot move his legs and surmises that there is a build-up of fluid in his spine that needs to be drained if he ever hopes to walk again. Obviously, he cannot perform the surgery on himself, so he recruits his daughter, Riley. Just as Dan predicted on this week’s Podjiba podcast, Scott — the stoner with a master’s in anthropology — recommends using the heroin as an anesthetic. Under the influence of the heroin, the doc passes out and can’t continue providing Riley with surgical instructions. She figures it out on her own, drains the fluid, and he wakes up with the ability to wiggle his toes again. Huzzah.

Where’s the mystery, folks? If I wanted to see a surgery, I’d watch The Resident. Why aren’t more people being attacked and killed by prehistoric animals? Where’s the batshittery? There’s more action in one of those episodes of The Walking Dead where Daryl walks through the woods for an hour.

It’s not that much more interesting topside. The husband is rejected as a pilot to fly the drone into the sinkhole to retrieve the lost, but the non-descript governmental types do recruit his best friend, Captain Stephen Delgado (Nicholas Gonzalez). As it turns out, Delgado was the man Eve was sleeping with when she arrived too late to take her daughter to school. It’s also why Delgado requested a transfer out of the country — he’s in love with his best friend’s wife. All the same, he pilots the drone into the sinkhole, the drone loses power, and he crashes into the portal but survives. The episode ends with Delgado hanging from a tree by his parachute, which might be more interesting if we cared at all about these characters.

But we don’t watch La Brea for the soap opera drama! We watch to see terror birds pick out the eyes of the Angelenos, to see if there’s alien life in the past, or to find out if all of these characters are actually distantly related to themselves as the first citizens of Los Angeles. I feel let down. Someone should have consulted with Roland Emmerich.


← 'I Am Weed': That Megan Fox and Machine Gun Kelly Interview Has Inspired a Lot of Jokes | Airports: Do You Arrive At Least Two Hours Early Or Are You Wrong? →