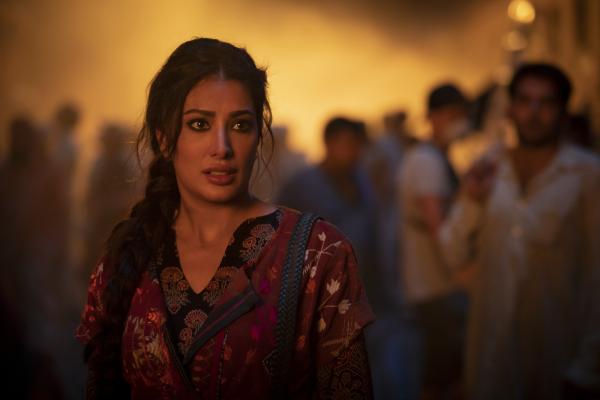 'Ms. Marvel' Recap, 'Time And Again:' What You Seek Is Seeking You

Previously on Ms. Marvel: Despite her family being upset with her about her actions at the wedding, Kamala and Muneeba fly down to Karachi to visit Sana and spend time with her, and Kamala crosses paths with two individuals who teach her more about what she needs to know when it comes to her bangle, the Clandestines, and who she really is.

THE STORY SO FAR: It’s 1942 in Britain-occupied India, and Aisha is still on the run and in hiding after finding the bangle and being separated from her fellow Clandestines. She meets and falls in love with a farmer/political activist named Hasan and the two of them soon become parents to Sana, Kamala’s grandmother. But it’s not long before Najma finds Aisha and her family, and demands that she bring the bangle to her so that they can go back home. And it’s this unexpected encounter that results in Kamala finding herself in the same time period as her great-grandmother, and right when Partition is taking place.

WHAT’S GOOD ABOUT THIS EPISODE?: The opening sepia-toned newsreel that describes when India gained freedom and independence from Britain in August of 1947 before jumping back to 1942, when Aisha was running from the soldiers who ambushed her, Najma, and the rest of the Clandestines at the Ten Rings temple where the bangle was found. Aisha and Hasan meeting and falling in love, and starting a family together with the birth of Sana. (This meet-cute is also how we find out the origin of the “What you seek is seeking you” quote inscribed on the bangle, as it comes from the poems of Jalal El-Din El-Rumi that Hasan is very fond of) Just simply seeing baby Sana, as she plays with her mother’s bangle and as Aisha dotes on her endlessly. Aisha convincing Hasan that it’s no longer safe for them to stay in India and that they need to go as the riots continue to intensify.

Aisha finally opening up to Hasan and telling him the truth about who she is and what she’s been running from all this time. Aisha bleeding to death from Naomi’s attack and reaching out for help as she hears Sana’s cries, followed by Kamala’s arrival. Kamala and Aisha finally meeting in person before the latter succumbs to her wounds. Kamala coming to Sana’s aid, and her realization that the ‘trail of stars’ that led Sana and Hasan to find each other was her doing, and that she was always destined to make this happen. Najma attempting to enter the veil and go back home, and Kamala trying to convince her that she would only get herself killed, and to not leave Kamran all alone. Muneeba learning from Owais about the existence of the “Find my phone” feature and using it to track down Kamala when she doesn’t come back to Sana’s place. The goodbye scene between Kamala and Kareem, which ends with him giving her his Red Dagger scarf that he wears as a mask (he’s clearly more thoughtful and generous with red scarves than Jake Gyllenhaal…allegedly. Don’t mind me, I rewatched the short film for All Too Well this weekend)

Sana, Kamala, and Muneeba looking at photo albums together, particularly the pictures of Muneeba as a very stylish and rebellious teenager back in the day when she was obsessed with Bon Jovi, and the three of them making it clear how much they love one another. Bruno being found by Kamran, who finally apologizes for getting his name wrong, before a drone from the Department of Damage Control finds them and causes the entire Circle Q to explode when Kamran uses his powers to shoot it down, and the drone accidentally fires a missile into the store.

WHAT’S NOT SO GOOD ABOUT THIS EPISODE?: Najma, her obsession with going back home, and her rivalry with the Khan family, still remains the weakest and least interesting thing about Ms. Marvel. And it says a lot that everything else about this episode that doesn’t focus on her or her evildoing that could possibly cause world destruction simply reminds the audience why the show is worth watching. To see Najma and her fellow Clandestine quickly and randomly killed off in a scene that felt way too rushed, and wasn’t nearly as effective as it could’ve and should’ve been? It simply hammered home even more that this particular angle with Najma and the Clandestines needed better writing for their storyline, or that maybe it didn’t need to be in this series in the first place.

DO ANY OF THE AVENGERS APPEAR IN THIS EPISODE?: No.

ANY EASTER EGGS WE SHOULD WATCH OUT FOR?: Not too many in this episode. Kamala’s broken pendant on her necklace now looks like the logo that is on her costume. Muneeba learning the truth about Kamala and her superpowers also happened in the comics as well, where she was mostly grateful to have a daughter doing what she can to help others in need. And Kamran absorbing his mother’s essence appears to have granted him powers of bio-luminescence, which are the same powers that he has in the comics.

And don’t bother asking why Kamala traveling through time, even to help her own family in their time of need, doesn’t grab the attention of the TVA from Loki, as the rules of time-travel/Timey-Wimey/Jeremy Bearimy can and probably will just make your brain explode like the Circle Q at the end of this episode.

ANY FAN THEORIES SPREADING LIKE WILDFIRE ACROSS THE INTERNET BECAUSE OF THIS EPISODE?: Was it British soldiers going after Aisha, or members of the Ten Rings (or maybe even both) since the bangle was found in one of their temples? The possibility that Najma transferred not just her powers, but her entire essence into Kamran so that she could possess him and ensure that he will be empowered and able to open the portal that will lead him back home.

TO SUM IT ALL UP: This was the shortest episode of the season, and it was a much better viewing experience, due to the lack of attention being given to Najma and her attempts to get home which only succeeded in killing her and disintegrating her as if she was Sarah Connor in a bad dream about Judgment Day. The love story between Aisha and Hasan was a pleasure to watch (I know there were some complaints made last week about Sana and Muneeba mostly conversing with each other in English instead of Urdu, and I’m sure those same complaints will be made about the scenes between Aisha and Hasan. I also know that this particular topic is not my lane, so I won’t make the mistake of swerving and getting in the way of people more qualified than myself to comment on this), and seeing the three generations of Khan women laughing together and bonding with one another was honestly the best thing about this episode.

Only one episode remains this season. And not only will we finally get to see Kamala in full costume as Ms. Marvel, her reunion with Bruno and Nadia to hopefully resolve everything between them, and seeing what happens next regarding Damage Control hunting down Kamran and eventually finding out that his mother is actually dead. Will this season finale stick the landing, or will it seemingly continue the tradition of Marvel shows on Disney Plus fumbling the ball at the end of the season and not resolving everything from this past season in a satisfying way that will make most viewers happy?

We’ll find out soon enough. And if you have the misfortune of looking at Twitter early Wednesday morning when Ms. Marvel drops, I guarantee that you’ll find out even sooner thanks to Marvel stans tweeting all about it, and sharing plenty of screenshots all over the timeline before you’ve even had your morning coffee/tea/absinthe to start the day.

This episode of Ms. Marvel has been brought to you by “A Song For Mama” by Boyz II Men:


And “Firestarter” by Prodigy:


← Is 'Flowers in the Attic' Based on a True Story? | Is Armie Hammer Actually Selling Timeshares? →