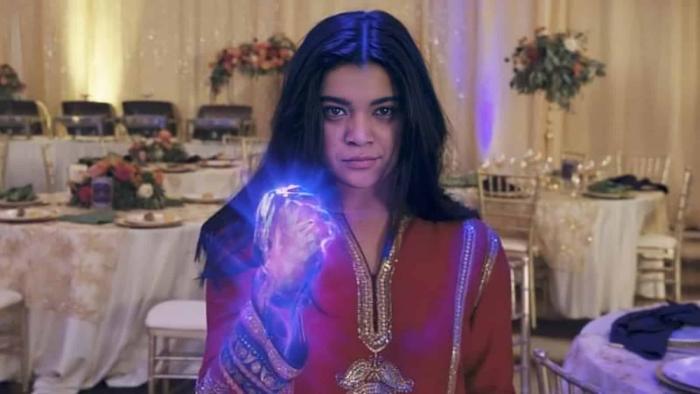 Previously on Ms. Marvel: Kamala is still trying to learn more about her superpowers, where they came from, and how to use them. She also meets and falls for a fellow student named Kamran, and the two of them begin hanging out together. Meanwhile, Bruno finds himself becoming jealous of Kamala spending time with Kamran, while also wrestling with an academic opportunity at CalTech that would force him to leave Jersey City. Nakia (who is close friends with Kamala and Bruno) decides to campaign for the mosque board in order to make some much-needed changes. The Department of Damage Control continues its investigation into locating and detaining Kamala. A young boy’s reckless mistake forces Kamala to suit up and use her superpowers once again in order to try and save his life.

THE STORY SO FAR: After she avoids being captured by the Department of Damage Control thanks to Kamran’s help, she is introduced to his mother, Najma, who explains that she, Kamran, and the rest of their family are djinns (hence the slowed-down aging process for everyone other than Kamran), that she knew Kamala’s great-grandmother, Aisha, and also that Kamala is part-djinn herself. They all need Kamala’s help (mostly due to her bangle, and the superpowers that have been unlocked by it) to get back to the home dimension they have been exiled from, but when they sense that Kamala is reluctant to help them (mainly because sending them back home via interdimensional travel would result in mass destruction in Jersey City and probably for the rest of the Earth), they decide to violently take matters in their own hands.

WHAT’S GOOD ABOUT THIS EPISODE?: The opening scene in which Najma, her fellow djinns, and Aisha herself locate the bangle in a temple somewhere in British-occupied India back in 1942, and end up being separated due to the arrival of soldiers looking to destroy the temple and anyone inside of it. Najma explaining all of this to Kamala in the present day, while also taking a moment to tease Kamran about his attraction to her. Kamala: “I’m a djinn.” Bruno: “And tonic?” The look on Kamala’s face when Bruno refers to Kamran as “average-looking.”

Damage Control Agent Deever showing up at Kamala’s mosque to try and find her (and she isn’t nearly as respectful as she should be, despite Cleary warning her about that beforehand, as evidenced by her refusal to remove her shoes upon entering), only to get called out by both Nakia and Sheikh Abdullah, who let her know that she has no authority there without an actual search warrant. Kamala going from being impressed with her superheroics thanks to the social media response, to conflicted when she realizes how much Nakia dislikes her. Tyesha: “Kamala, are all these people your family?” Kamala: “Yeah. We’re Pakistani, we roll deep.” Auntie Sharon being played by Sakina Jaffrey from the short-lived-and-deeply-missed television series Timeless. Kamala seeking advice from Sheikh Abdullah as to whether she should keep using her powers to help, and how to gain the support of her community.

Yusuf’s trip to the Circle Q for a Hostess Fruit Pie (a very understandable vice, as I was really fond of them when I was a teenager, particularly blueberry and lemon, and the vanilla pudding pies as well), and ends up translating Bruno’s “homework” about the djinns and what they are. Bruno admitting to Kamala that he’s been accepted to CalTech and telling her that he will do whatever he can to help her help Najma and her people get home, while also reminding her that patience is a virtue. Kamala’s conversation with Muneeba, which results in her mother explaining how difficult it was for her and for Yusuf when they first arrived in America, and how both family and faith helped them to overcome that mountain.

The entire wedding scene, from Yusuf comforting Aamir about his doubts, to Aamir and Tyesha exchanging vows, to both of their families (including Bruno, who pretty much is a member of the Khan family) performing a fun and beautifully choreographed dance sequence straight out of a Bollywood movie, to the fact that there’s a Pakistani Bon Jovi cover band called Brown Jovi. Kamala fighting for her life against Najma and the djinns to Bon Jovi’s “Livin’ On A Prayer.” (The part where she snuck around the kitchen to hide from them felt very much like Lex and Tim hiding from the velociraptors in Jurassic Park) Bruno: “I swear [Kamran] gets my name wrong on purpose.” (Look on the bright side, Bruno. You’re not Ukrainian, so you don’t have to deal with constantly being referred to as “Boris,” because people think you’re Russian, which can get pretty annoying.)

Kamala and Bruno’s life being saved by both the inexplicable image of a locomotive speeding towards them out of a tunnel of bright light, and also Deever and her fellow agents arriving like Big Damn Heroes to take down Najma and company and bring them in. Nakia finding out that Kamala is actually “Night-Light,” and not being happy in the slightest about Kamala lying to her and keeping this a secret from her. Kamala having a FaceTime call with her grandmother, Sana, who somehow saw the very same image of the locomotive, and insists that both Kamala and Muneeba immediately need to get their ass to Mars Karachi.

WHAT’S NOT SO GOOD ABOUT THIS EPISODE?: Najma and her fellow djinns going from allies who feel like they could be Kamala’s other family, to ruthless villains who would kill her without any hesitation whatsoever, felt a little too immediate, and with not enough set-up to prepare for that sudden moment where we see them coming after her with killswitches fully engaged.

DO ANY OF THE AVENGERS APPEAR IN THIS EPISODE?: No.

ANY EASTER EGGS WE SHOULD WATCH OUT FOR?: The bangle is found by Aisha and Najma on the wrist of a blue-skinned individual who could possibly be of Kree origin. And once again, it could possibly a quantum band like the ones used by cosmic superhero Quasar (who is known for having two quantum bands, and both Aisha and Najma were looking for two bangles specifically), who hasn’t been introduced in the Marvel Cinematic Universe yet. The logo of the Ten Rings is carved into the ground of the temple where the bangle is found. Najma explains to Kamala that in their home dimension, their kind are known as the Clandestine, who are characters that had their own comic-book series back in 1994. The “Popcorn! Popcorn!” video being watched on YouTube by one djinn during Kamala’s conversation in the kitchen with Najma and Kamran is the one made by Zoë and commented on by Deever during her interrogation. Dr. Erik Selvig is mentioned by Bruno during his conversation with Kamala about alternate dimensions and interdimensional travel. Sheikh Abdullah’s advice to Kamala, in which he says “Good is not a thing you are. It’s a thing you do” was originally said by Kamala to herself in the comics (specifically issue #5 of the Ms. Marvel series from 2014) when teaching herself how to do a better job of using her powers to help others.

FYI: If you’re wondering why Aamir’s shoes went missing before the wedding, it’s not because the mosque shoe thief from last week’s episode was accidentally invited, it’s part of Joota Chupai, or “hiding of the shoes,” which is a practical joke done by family members and members of the wedding party in which the groom’s shoes are taken and held for ransom. And as to why Aamir and Tyesha were each asked three times if they accept each other as husband and wife, that is part of the Nikah ceremony.

ANY FAN THEORIES SPREADING LIKE WILDFIRE ACROSS THE INTERNET BECAUSE OF THIS EPISODE?: Kamala’s bangle that she inherited from her great-grandmother, Aisha, is very similar to the Ten Rings (the jewelry that looks more like bracelets than rings, and that Tony Leung wore so damn well on his forearms, and not the terrorist group run by Leung’s character, Wenwu), and could be made from the very same magic/technology. And that this season will end with either an appearance by Aisha to help Kamala take on Najma, or an appearance by Brie Larson herself as Carol Danvers, a.k.a. Captain Marvel.

TO SUM IT ALL UP: I’m running out of ways to describe how much I really like Ms. Marvel, how much I’m enjoying the show with each episode, and how Iman Vellani is utterly delightful to watch with every second of screen time she has. There are only three episodes left, and though I have no idea how this season will end and whether or not we’ll all be happy with however it does end, I’m just hoping that Marvel Studios takes a few notes from how Ms. Marvel turned out, and allow a little more ingenuity and flair in not just how they tell their stories, but how those stories are allowed to look in terms of style and cinematography. And please don’t listen to Marvel stans on Twitter who complain about such cinematic flair in the movies they watch, like how one Bad Take was floating around Twitter from one user this weekend who whined about how Sam Raimi made Doctor Strange in the Multiverse of Madness look like a Nineties horror movie. Because 1) In the words of Dr. Anthony Fauci: You do not know what you are talking about, quite frankly. And I want to say that, officially. You do not know what you are talking about. And 2) If we’re supposed to think that Doctor Strange In The Mom looking like Candyman, Dead Alive, Tales from the Crypt Presents: Demon Knight, From Dusk Till Dawn, or Scream is a bad thing, this is the part where we laugh at you, and tell you how wrong and foolish you are. If Marvel and Disney are willing to let more directors break loose from the house style and do their own thing, then by all means, let them. Especially if it means they’ll get fewer complaints about their visuals and cinematography in recent Marvel films looking more and more like wet cement.

This episode of Ms. Marvel has been brought to you by “Let’s Get Married” by Jagged Edge, which is very catchy and memorable, but if you pay attention to the lyrics, it is truly one of the worst songs to play at any wedding, right along with Whitney Houston’s “I Will Always Love You.”

“Meet me at the altar in your white dress/We ain’t getting no younger, so we might as well do it.” (shakes head) Okay, Jagged Edge.