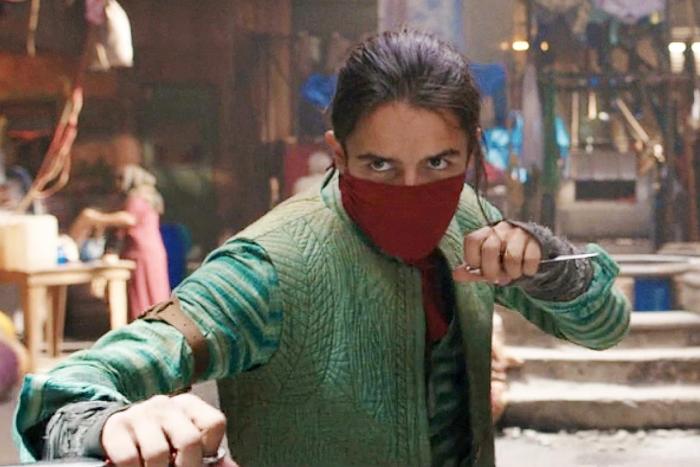 Previously on Ms. Marvel: After she avoids being captured by the Department of Damage Control thanks to Kamran’s help, she is introduced to his mother, Najma, who explains that she, Kamran, and the rest of their family are djinns (hence the slowed-down aging process for everyone other than Kamran), that she knew Kamala’s great-grandmother, Aisha, and also that Kamala is part-djinn herself. They all need Kamala’s help (mostly due to her bangle and the superpowers that have been unlocked by it) to get back to the home dimension they have been exiled from, but when they sense that Kamala is reluctant to help them (mainly because sending them back home via interdimensional travel would result in mass destruction in Jersey City and probably for the rest of the Earth), they decide to violently take matters in their own hands, in the form of attacking Kamala at Aamir and Tyesha’s wedding. And when Kamala reaches out to her grandmother via FaceTime call, she is told that both she and her mother need to come see her in Karachi as soon as possible.

THE STORY SO FAR: Despite her family being upset with her about her actions at the wedding, Kamala and Muneeba fly down to Karachi to visit Sana and spend time with her, and Kamala crosses paths with two individuals who teach her more about what she needs to know when it comes to her bangle, the Clandestines, and who she really is.

WHAT’S GOOD ABOUT THIS EPISODE?: The change of location as we see Kamala leave Jersey City behind to be in Karachi with her mother and grandmother, and the terrific cinematography that accompanies her time there to show the audience what Karachi is like. The scenes between Kamala and Sana, in which she not only shows the paintings that she created in order to preserve the memories of her home and her family, but also lets Kamala know that she’s not alone when it comes to figuring out who she is and what her path is supposed to be. Kamala meeting and going up against Kareem, a.k.a. “Red Dagger,” and watching them exchange punches as well as wisecracks. Kareem teasing her about whether all masked Americans have superpowers, to which Kamala shoots back that she could actually be Canadian. (Which is an in-joke, as Iman Vellani really is from the land of Alanis Morissette, milk that comes in bags, and fighting seven evil ex-boyfriends exes in order to win someone’s heart) Kamala being introduced to Waleed, leader of the Red Daggers (played by Bollywood superstar Farhan Akthar) who explains to her what the Clandestines are, where they come from, and why it would be terrible/horrible/no-good/very bad for Earth if they find a way to tear down the wall that separates their realm from Earth and go back home. Kareem: “Come with me if you want to live!” Kamala: “What?” Kareem: “Just kidding. I always wanted to say that. But really, we should go.” The chase between Kamala and the Red Daggers in an auto-rickshaw vs. Najma and the Clandestines, which then results in a fight between both sides that results in Kamala’s bangle being stabbed by Najma, and Kamala somehow going back in time and ending up in India during the time of the Partition.

WHAT’S NOT SO GOOD ABOUT THIS EPISODE?: I know that this episode of a six-episode series needed and wanted to hit the ground running, but it would’ve been nice for a little more detail on how the show went from “Kamala will never be allowed by her mother to set foot in Karachi” (which Kamala has said) to “Kamala actually will be allowed to set foot in Karachi by her mother, even when she’s been grounded for getting in serious trouble and upsetting her parents.” Which felt a little like the show’s writers going: “Don’t pay too much attention to what you previously heard. The show needed this thing in the plot to happen, so we just made it happen, and we did it offscreen between episodes.” Najma and the Clandestines escaping from the Department of Damage Control’s supermax prison, which seemed way too easy considering that this is a supermax prison for supervillains of all kinds, and yet it seemed about as hard to break out of as Arkham Asylum. The fact that they were all able to arrive in Karachi as quickly and conveniently as they did (and at the hidden base of operations where the Red Daggers are, no less), especially considering that the flight time from New Jersey to Karachi is about fifteen hours.

Both mother-daughter conversations between Muneeba and Sana, and the one between Kamala and Muneeba that followed, start off well and just when it seems that they’re about to dive into deeper waters, the scenes … end rather abruptly and move on to the new scene before it gets too dramatic. I had a similar complaint about the season (series?) finale of The Falcon and the Winter Soldier regarding Bucky coming clean to Yori about his past as the Winter Soldier, and about the fact that he killed Yori’s son during one of his many missions, and how that scene ended before we could even witness that conversation between the two.

Oh, and almost every time Kamala’s cousin, Owais, opened his mouth to say something snide to her, I wanted her to punch him in the face with an embiggened fist.

DO ANY OF THE AVENGERS APPEAR IN THIS EPISODE?: No, they don’t.

ANY EASTER EGGS WE SHOULD WATCH OUT FOR?: The entire episode, particularly the introduction of Kareem-as-the Red Dagger, is largely inspired by issue #12 of the 2016 Ms. Marvel comic-book series, and apparently, if you scan the QR code that is positioned on the booth of the street photographer who takes a Polaroid of Kamala right after her cousins leave, you can read that issue for free. Kamala’s aunt, Rukhshana, commenting on how Kamala is not a typical Pakistani name, which could be a reference to the comics (specifically issue #5 of the 2014 Ms. Marvel comic-book series), in which Yusuf explains to Kamala why she was given that name and why it was such an important choice that was made. (“Kamal” means “perfection” in Arabic, and after Muneeba’s very difficult pregnancy with Aamir, she was told that she wouldn’t be able to have any more children. Kamala was miraculously born five years later and was the most perfect thing Yusuf had ever seen, hence the name). Muneeba complains about Sana having so many cardboard toffee boxes all over her home as part of her hoarding, and one of those toffee boxes was used to send the bangle to Kamala back in the first episode. The mural of Ant-Man that Kamala sees at the train station, which not only indicated that it is Part 4 of the “Karachi x Avengers” series but the mural is created by artists Saira Hussain and Ms. Marvel co-creator Adrian Alphona.

FYI: Kite-flying (which was used to communicate Kareem’s text message to Kamala while she was talking to Sana in her ‘hiding spot’) is a very popular activity in Pakistan, particularly during the Basant Panchami Festival that marks the arrival of spring. Due to the many deaths and injuries that have occurred as a result of kite-flying, it was banned starting in 2007, and that ban was finally lifted earlier this year.

ANY FAN THEORIES SPREADING LIKE WILDFIRE ACROSS THE INTERNET BECAUSE OF THIS EPISODE?: The main theory that has been shared since this episode is that the “trail of stars” that led Sana to be reunited with her father when she was younger and when the two of them were separated during the Partition was actually provided by Kamala during her time-traveling exploits. As well as some fans wondering whether or not the TVA will make an appearance and go after Kamala due to her sudden appearance in a time period that she doesn’t actually belong in.

TO SUM IT ALL UP: This was another enjoyable episode of Ms. Marvel, and yet, it’s easy to say that the least enjoyable thing about it is whenever we cut to Najma and the Clandestines. I know they’re the Big Bads, and they’re who Kamala needs to defeat in order to protect Jersey City and the rest of the world, but I was much more interested in Kamala spending time with her mother and grandmother, and bonding with Kareem and Waleed. The Clandestines so conveniently breaking out of DODC custody just seemed like it was something that happened to simply push the plot forward and give us more of Kamala being a superhero. This is obviously the point of this entire show, but their presence dragged this episode down slightly more than expected.

Only two more episodes to go for this season of Ms. Marvel. And for the next episode, I’ll fight the urge to assume that Mary Steenburgen will make an appearance as part of Kamala’s time-travel exploits involving trains.

This episode of Ms. Marvel has been brought to you by “Turtle Power” by Partners In Kryme: