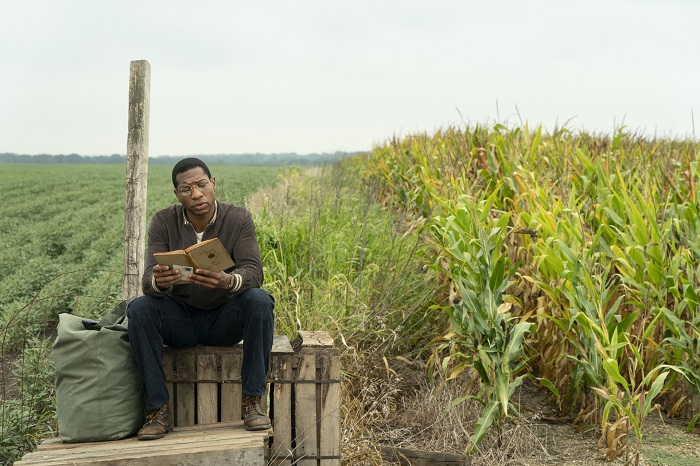 With Precision and Verve, ‘Lovecraft Country’ Imagines Pulpy Dreams and Nightmares with Black Americans at Their Center

Open a book, and travel to another world. To flee from mountains of madness, or to meet a Princess of Mars, or to journey through the fourth dimension we call time, or to tiptoe around a haunted house, or a press deeper into a hidden cave. Every dream and every nightmare lurks in your imagination, and every one beckons you forward, inviting your participation. Are you the hero, or are you the villain? And if you’re one—who is the other? 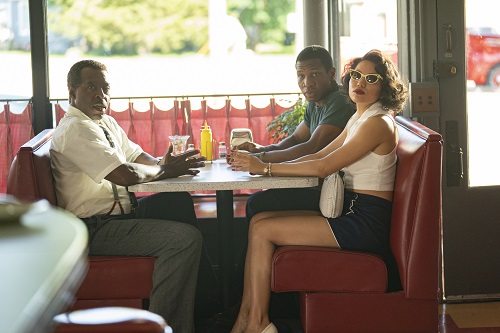 Lovecraft Country, an adaptation of the 2016 novel by Matt Ruff, is playing with legacies throughout—not just what we are owed individually, although the show’s tagline, “Take back your legacy,” prominently features that specificity. Showrunner Misha Green is thinking broadly here, with a grand scope, and pinpointing specific details of the Black American experience to consider with fresh eyes and genre spins. What are Black Americans owed as citizens? As veterans? As the subject of ridicule and cliché, in our pop culture history—in movies, novels, TV shows, comic books? As people? “The past is a living thing. You own it, owe it,” writes Michael K. Williams’s Montrose to his son Atticus (an exceptional Jonathan Majors, truly on the come-up after Da 5 Bloods and The Last Black Man in San Francisco), setting off a series of events that brings Atticus back to Chicago and then to Massachusetts, into the orbit of a nefarious group of distant relatives and powerful wizards who want Atticus’s blood. Magic is real, and it is a realm of dominance and oppression. Who deserves to wield it? Who do we expect to yield to it?

Green is playing with tons of references and iconography here, layering on question after question and imbuing her narrative with complexity and depth. Don’t let your attention wander; every detail matters. I have seen the first five episodes of Lovecraft Country and have read, in Ruff’s novel, through the events of the second episode, and while the latter is readable, the changes Green has made are thoughtful and resonant. She is taking on, with the help of an array of exceptional directors (Yann Demange, of ‘71; veteran TV director Daniel Sackheim, of The X-Files, The Americans, The Walking Dead, Ozark; Victoria Mahoney, of The Rise of Skywalker; the iconic Cheryl Dunye, of The Watermelon Woman), questions of race, gender, and power that highlight the omnipresent tensions and impossibilities of what it is to be American. The villainy of white men. The complicity, and failures, of white feminism. The depth and dynamic nature of Black lives. The immorality of American imperialism.

You could make a comparison between Lovecraft Country and Watchmen—and I’m sure many will—for both imagining Black Americans as the heroes we have long accepted as white. But where I think Watchmen stumbled in considering how our institutions are inherently corrupt, and might not be capable of being transformed, and therefore saved, by their participants (this piece by Aaron Bady at the Los Angeles Review of Books is worth reading), I think Lovecraft Country is asking a slightly different question. So many of our favorite forms of entertainment—sci-fi literature, horror films, ghost stories—are built on a foundation of white supremacy. They came out of industries that systematically excluded Black Americans from their ranks. But when those creations are revealed as the products of exclusionism, what changes about the form itself? What transforms in our cultural imagination about wizardry or haunted houses or metamorphosis when it is Black Americans at the center of these stories? What stories are told then?

Lovecraft Country posits those questions by focusing on Atticus, a Korean War veteran who returns to the South Side of Chicago when he receives a letter from his estranged father. Montrose has been missing for weeks, was last seen in the company of a white person in a shiny silver sedan, and his letter asks Atticus to come find him. Horror and sci-fi fan Atticus thinks that Montrose is being held in Arkham, in Lovecraft Country, where so many of the author’s stories were set, but his uncle George (Courtney B. Vance) corrects him once he sees his brother’s handwriting. Montrose is actually being held in Ardham, Massachusetts, a place with its own set of secrets. No news has come out of the place, or Devon County, where it’s located, in centuries. It was created by witch hunters, who reveled in burning alleged witches at the stake. It’s protected by a racist sheriff, and rife with missing-person reports. It is a place where no one who looks like Atticus, George, or Atticus’s childhood friend Leti (Jurnee Smollett, resplendent), who comes along for the ride, should go. But Montrose is missing, and his letter speaks of some familial legacy, of which Atticus is the rightful inheritor. If they don’t go find him, no one else will. 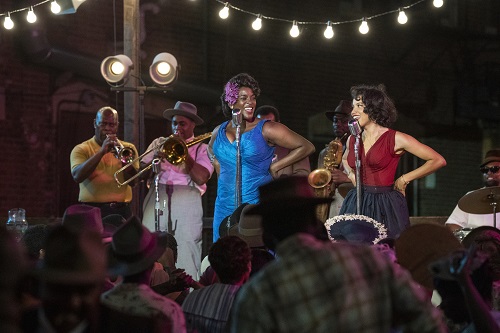 Premiere episode “Sundown” introduces these characters, builds out the beauty and complexity and frustrations of their lives in Chicago (that block party!), and then hits the road to Ardham. Efficiently and swiftly, “Sundown” shows us who these people are. Leti, a photographer, singer, and wanderer who has a rocky relationship with her sister Ruby (Wunmi Mosaku, who does great work later on in the series) and who missed her mother’s funeral, a transgression Ruby and their brother Marvin (Demetrius Grosse, of Justified!) cannot forgive. Leti is self-sufficient, stylish, and deeply capable; Smollett gives her an unbelievable amount of life. Atticus, who knows that some of his favorite books were written in a way that ignores his very existence (“Stories are like people … try to cherish them, and overlook their flaws”), and who is haunted by something that happened during his service in Korea, and who is bristling every moment of every day at the continued injustice he faces because of the color of his skin. How quickly he puts together that the dinette which used to serve Black people has been burned down, and that the shoggoth’s bite is infectious, and that these people in Ardham want something from him that might be impossible to give, provides us with an excellent idea of the kind of hero he will be. Perhaps hot-headed, and quick to anger, but also loyal and resourceful. And then there’s George and his family, including his wife Hippolyta (Aunjanue Ellis) and their daughter Diana (Jada Harris; notice the Wonder Woman reference here), all of whom work together putting together guidebooks for Black travelers. They’re a family of adventurers—Hippolyta, with her eye to the stars; George, with his itch to see the world; Diana, with her imagination and her comic books—and their affection for genre, pulp, and astronomy will be imperative down the line. Oh, and there’s also this:

LOVECRAFT COUNTRY also really demonstrates the deep way that GREEN BOOK fucked up in ~actually being about~ the travel guidebooks created by and for the Black community. in like 10 minutes you get such a strong grasp of george & hippolyta's work and passion, plus dee's artwork! pic.twitter.com/ZRixNR6paX

After all this setup, when Lovecraft Country leaps forward into the realm of Lovecraftian horror, it does not hesitate. (This is another solid change from the book, which takes its time confirming that monsters like shoggoths are, in fact, very fucking real.) The final 20 or so minutes of “Sundown” are an absolute bloodbath, a merging of the real-life horror of sundown towns and cabin-in-the-woods scares (film critic Robert Daniels wrote a phenomenal piece about this that you should read), and underscore that yes, Lovecraft Country will be taking its monsters very literally. On the one hand, there is something slightly disappointing about how much Lovecraft Country, like Watchmen did, relies on a certain flatly written racist type to instill and inspire fear (Hannah Giorgis wrote a very thought-provoking piece about this for The Atlantic). But on the other hand, Lovecraft Country does also lean into magical and fantastical elements, and that switch provides for creative opportunities down the line. The special effects work throughout is pretty strong (the third episode, “Holy Ghost,” in particular), and while each episode makes room for additional character development, the story never strays too far away from Atticus and his connection to Ardham. The fifth episode, “Strange Case,” does particularly well balancing these various storylines. Its focus on transformation shines a light on the affective power of Mosaku and Williams’s performances; I wept during a certain scene featuring Williams. It might be the strongest, most honest work of his career, and I was blown away.

Having seen halfway through the season, I will say, though, that I’m not entirely sure where Lovecraft Country is going. Episodes that play specifically with form are quite strong, and the acting throughout is exceptional. The production design, art direction, and cinematography are beautiful and thoughtful; the nods to Gordon Parks’s photograph “Department Store, Mobile, Alabama,” Margaret Bourke-White’s photograph “The Louisville Flood,” and the 1950 film The Jackie Robinson Story were all well-done. The references to major Black voices and critics like James Baldwin and Gil Scott-Heron are thought-provoking (“Whitey on the Moon” is used far better here than in First Man, I must admit), and the use of anachronistic music from the likes of Tierra Whack and Rihanna is invigorating. And blessings upon this show for putting Majors in a parade of tiny shirts and Smollett in an array of exquisitely fitted ensembles! Costume designer Dayna Pink is doing the work of the old gods and the new!

A recurring issue, though, is how certain overly familiar setups (racially motivated violence in all its forms, in particular sexual assault) seem to be written only as a way to convince us as viewers of the primary characters’ goodness. The responses from the likes of Ruby, Leti, and Atticus are often thrilling instances of revenge, but sometimes they seem more simplistic than the larger questions the show is asking. Those situations reduce these characters to only their race, when the show otherwise implores us to consider these individuals for the totality of their experiences; it’s an imbalance that Lovecraft Country doesn’t always nail. And because, halfway through the season, it’s not clear what the endgame is revolving Atticus, the threat he’s facing, and the choices he’ll inevitably be forced to make to protect the people he loves, I’m wondering how the show might answer those grander queries about genre and form and America and Blackness. A tidy bow is not required! But Lovecraft Country is fundamentally, I think, a response story—a response to whiteness as the American cultural default, politically, creatively, and functionally. It is a rejection of that monotony and hegemony, and I’m curious what the spell Lovecraft Country is casting on us will magick instead.

Lovecraft Country premiered on HBO on Sunday, August 16. Its 10-episode season will wrap on October 18, 2020.