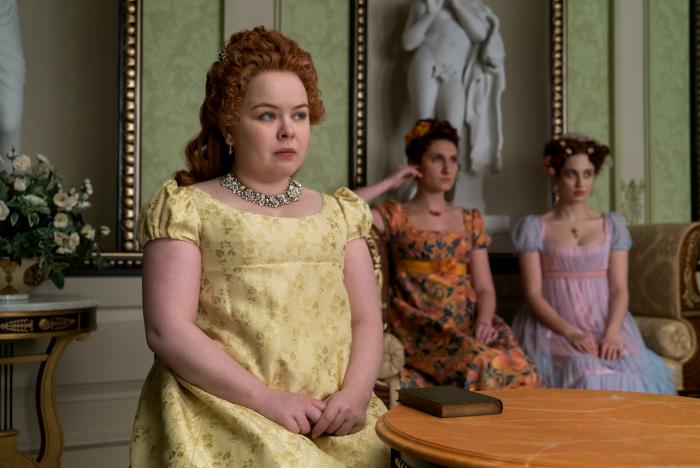 There has been a lot of discussion about Bridgerton, Netflix’s period romance. I have written about the show’s problems regarding its lack of depth and its depiction of Marina and how she is merely used to prop up and develop the Featheringtons, her distant relatives. Meanwhile, Roxana thoughtfully delved into the issues of male consent and assault in both Bridgerton and Wonder Woman 1984. Bridgerton is many things, including a bit clueless to its own machinations and colorism. This isn’t to say that I completely hated it, just that there is a LOT to ponder about race, bias, and how that is portrayed in the media, even in a show as fantastical as Bridgerton. That brings me to Penelope Featherington, Marina’s distant cousin and the best friend of Eloise Bridgerton, who scoffs at high society expectations for women and the concept of marriage.

Major spoilers ahead! Turn back now if you haven’t seen the show (or don’t, the choice is yours!).

Penelope (or Pen, Eloise calls her) is the kind, friendly Featherington who, unlike Eloise, actually wants to get married. She’s mild-mannered, always willing to lend a hand, and is the only one who shows interest in supporting Marina, who is revealed to be pregnant outside of wedlock and is subsequently mistreated and shamed by the Featherington matriarch. Or, at least Penelope appears that way for a while. She’s even a character I would have rooted for under different circumstances, but Bridgerton throws any goodwill toward Penelope out the window when it’s revealed that she is none other than Lady Whistledown (voiced by Julie Andrews), the gossip writer whose column dictates a lot of the series’ plot and which also becomes the talk of London’s socialites. Love her or hate her, everyone knows this mystery woman and they even anticipate whatever it is she writes. The power of her pen and knowledge is strong enough to leave even the queen’s feathers ruffled and no one in high society would ever want to become the subject of her column’s.

The image of Andrews sitting behind some desk with a quill in hand, smugly smiling at the pearl-clutching and social chaos she was stirring up within the city’s elite circles was too good to be ruined by the revelation that it was, in fact, Penelope’s voice behind Whistledown’s words. The mystery surrounding her identity was a fun subplot that should never have been uncovered and ruins a lot of Penelope’s initial characterization. The reveal only makes sense in that it confirms how the author is obtaining such juicy information. However, it doesn’t make any sense for Pen’s character in particular and it makes her seem rather petty as she offers up intimate knowledge to the public. She even sells out her own family. After all, this isn’t just some stranger writing about the happenings of the ton, this is a known character trading secrets divulged in confidence for ulterior motives. In the case of Marina, Penelope was willing to keep her pregnancy a secret so long as it didn’t affect her personally.

As soon as Marina began courting Colin Bridgerton, Penelope’s secret crush, all bets were off. Penelope outed Marina’s pregnancy to the public so that Colin would find out about it, bringing even more unbridled attention to her family in the process. Having already “shamed” the Featherington family, Marina had given up waiting for George, her unknowingly dead soldier boyfriend, to begin a relationship with Colin. Though Marina omitted the information of her pregnancy to him (for understandable reasons considering her own family’s ghastly reaction), the secret wasn’t Penelope’s to share and the fact that she used it against her own relative was pretty terrible of her to do. In Pen’s mind, she was doing what was best for Colin because she liked him, allowing her own selfishness to cloud her judgement.

This act becomes even more insidious because of Penelope’s secret identity. Was her being semi-supportive of Marina all an act? What even is her motivation for taking on a pen name? What is she trying to accomplish? Whatever the case may be, her actions are now sus and the reveal changes everything about the way Season 1 of Bridgerton is framed. I really wanted to like and root for Penelope and I did at first. She was unlike the rest of her family — sisters Prudence and Philipa were decidedly unmemorable, while mother Portia Featherington was haughty, controlling, and occasionally cruel. But, as the story unfolded and Whistledown began her takedowns and scandalous reveals to the public, I had to wonder about Pen’s true nature.

Yes, she was a woman with very little power and control. She was also the youngest of three siblings with an overbearing mother who undermined Penelope. However, Whistledown felt like a far cry from the young woman we were first introduced to. As Whistledown, Pen’s words were sometimes scathing and purposefully harmful, seemingly stirring up drama for the sake of it. It could be that Penelope began writing as Whistledown to take back control, but it definitely feels like she’s developing a taste for manipulation and biting retorts. In a way, she is becoming a bit like her own mother, whom she doesn’t exactly respect. As Whistledown, Penelope becomes a hypocrite, pointedly accusing others of not being truthful when she herself isn’t. At this point, the fact that she is Whistledown turns me off of her character, at least until there is further clarification regarding her reasons. For now, Penelope’s Whistledown is honestly no better than the people she so callously judges and that is something I hope Season 2 (if there is one and I suspect there will be) acknowledges and explores.