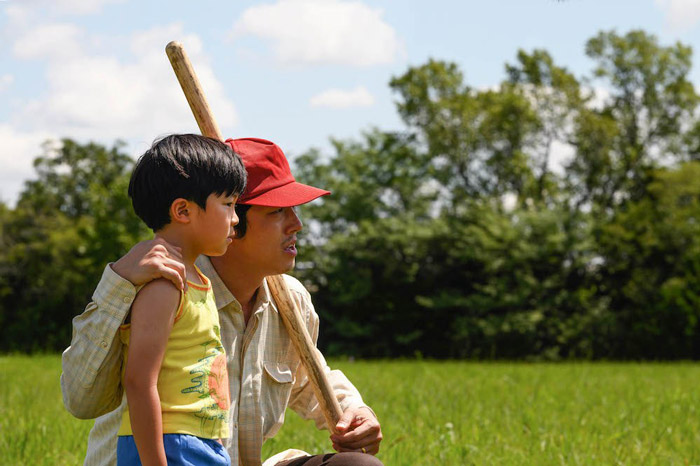 15 Of the Best Art-House Movies of 2020: Indies, Foreign Films, And Documentaries

This week, we’re celebrating the cinema of 2020, for better and for worst! Our critics will be rolling out our annual cheeky tribute to the movies we loathed, our Top Ten of 2020, along with reviews of some of the hottest titles now streaming. Leading the pack is our toast to 15 of the stupendous art house offerings that this year delivered.

15. Bloody Nose, Empty Pockets
“Singing a song of outcasts, drunks, and failures, this film—however you choose to categorize it—invites audiences into the fold, tenderly tugging us into earnest debates, urging us to drink in the stories, guzzle down the atmosphere, and swallow the hard-won lessons found at the bottom of a bottle.” —Kristy Puchko

14. Zappa
Much like its subject, Zappa is a hard film to categorize. It’s a music documentary, sure, filled with rare concert footage and talking heads testifying to Frank Zappa’s unique genius. There’s tales of excess, and shots of him rubbing elbows with John Lennon or Alice Cooper. Yet the sum of all those parts is something else entirely. What director Alex Winter, of Bill & Ted fame, has created with the blessing of Zappa’s estate and full access to his archive, is a portrait not only of a man, or an artist, but of the work that goes into a “work of art.” Always more of a musician’s musician than a mainstream figure, Frank Zappa was an avant-garde composer who dabbled in any genre he felt like, prolifically, to the sort of acclaim that made him a household name almost solely in Eastern Europe. If Winter were only trying to make a movie to appease Zappa’s fanbase, that would be a satisfying but limiting endeavor — and I say that as someone who was raised on Zappa’s music. The great thing about Zappa is that you don’t have to like Frank Zappa, or his music, or even know who he is, to get something out of this film. It’s not trying to cement a musical genius in the annals of history, but explore what it takes to be a genius. In the case of Frank Zappa, it took innate talent, a ferocious independent streak, and a singular obsession: To manifest the music he heard in his head into being, exactly as he heard it, for no audience other than himself. He pushed himself, and his collaborators, to their limit for decades, constantly chasing a form of perfection only he could ever identify. He was endlessly inventing and creating and challenging, and he was rarely if ever satisfied. Mostly though, he never stopped working. Being a genius isn’t something you are, it’s something you do, to the exception of nearly everything else. And it may only make you a household name in Eastern Europe. —Tori Preston

13. Scream, Queen! My Nightmare on Elm Street
“I’d anticipated Scream, Queen! My Nightmare on Elm Street to be an informative and entertaining journey through one of horror cinema’s most controversial titles. And it is absolutely. Chimienti and Jensen have created a celebration of A Nightmare of Elm Street 2: Freddy’s Revenge that’s a must-see for slasher fans and queer horror lovers alike. What I hadn’t expected was just how heart-wrenching yet ultimately uplifting its arc on Patton would be. There’s a radiant humanity to this horror-doc that takes it from fascinating fun to truly stupendous. Because Patton bravely allows us into his darkest lows, we get to more fully experience the highs that follow. And the result is a journey that’s thrilling and tragic, joyful and horrific, but ultimately exhilarating.” —Kristy Puchko

12. His House
“One of the most engrossing horror films I’ve seen in a long time, Remi Weekes’s film has heavy, unrelenting weight, but it’s also elegantly constructed, visually adventurous, and grounded by a pair of excellent performances from co-leads Ṣọpẹ́ Dìrísù (very good right now in Gangs of London, which you should be watching!) and Wunmi Mosaku (whom you should recognize as Ruby from Lovecraft Country). Most impressive is how Weekes weaves together typical horror elements—jump scares, spooky kids—with the film’s more inward-minded exploration of the damage we carry with us and the transgressions we might never get over. His House manages that tricky combination of things that tangibly go bump in the night and things that creep into your memory, and it’s an attack from all angles.” —Roxana Hadadi

11. Minari
“Lee Isaac Chung’s Minari is the kind of film that makes you probe at your preconceived conceptions about American identity, and about the projections we place upon it. Who is able to proclaim what is American and what isn’t? Who is and who isn’t? And who are you to assert superiority over someone else based on that answer? Combine all those questions with that opening line of The Godfather (“I believe in America”), a Malickian veneration of the American land (similar to Mudbound), and a consideration of old-world vs. new-world tension (reminiscent of The Farewell), and you’ll begin to see the layers of Minari. Chung’s semiautobiographical film hits on so many different emotional levels thanks to a fantastic cast that understands how the family at the center of this film is torn between a dream that might never be realized and a reality that might never be enough. Steven Yeun Oscar nomination when?!” —Roxana Hadadi

10. True History of the Kelly Gang
“The heavyweight here is [Essie] Davis, who is savage in scenes tragic and tender. She is a mother so ferocious in her love that she’s damn near feral. She lashes out viciously at those who threaten her brood and clutches a defiant Ned by the scruff of his neck. His hair spiking out between her white knuckles and she growls a message of menace and loyalty. There’s dirt under her nails, fire in her eyes, and blood on her hands. She is monstrous, motherly and majestic. In one exhilarating scene, she and Hoult face off in a vicious and powerful showdown so kinetic it pulled me to the edge of my seat.” —Kristy Puchko

9. Another Round
“Another Round has no interest in proselytizing the evils of booze or teaching its audience a black-and-white lesson about alcohol/ Real life doesn’t work that way, and Vinterberg is deeply invested in telling a realistic story, even with a plot this potentially absurd. Alcohol works differently from person to person, and for our quartet of pseudo-scientists, the results vary. Some handle their drink better than others, and some succumb to addiction very quickly. There are positives as well as negatives. Things go well for some of the men because of the drinking, but that does not outweigh the inevitably disastrous consequences of being a perpetual day-drinker while trying to maintain a job teaching children. It’s a remarkably non-judgemental film about hedonism and addiction, one that invites you, the viewer, to decide how much sympathy or understanding to give these men.” —Kayleigh Donaldson

8.Relic
“A compact and intimate piece of filmmaking, Relic is packed full of smart choices that unsurprisingly pay off very well. Any viewer old enough to be renting VOD titles without getting thwarted by parental controls can see themselves in one of the three central figures. A lot of Gen-Zers and younger millennials can likely see some bit of themselves in Sam, still struggling to figure out what to do with her life. Older millennials and Gen Xers will more likely identify with Kay. For Boomers and above there’s Edna, because Relic has the basic compassion and thoughtfulness the M. Night Shyamalan ‘beware! creepy old people!’ school of horror utterly lacks.” —Ciara Wardlow

7. I’m Thinking of Ending Things
Charlie Kaufman’s adaptation of Iain Reid’s novel is a real mindf*ck, to put it mildly. Its story begins with an unnamed young woman (Wild Rose’s Jessie Buckley), on her way to meet her bland boyfriend’s (Jesse Plemons) parents (David Thewlis and Toni Collette). Then, things take turns that involve surreal explosions of emotion, jarring time jumps, a curious B plot, and a talking pig voiced by Oliver Platt. The result is film that polarized critics, including our own crew. However, whether or not this movie is for you, it’s hard to deny there’s something savagely bold in its execution. —Kristy Puchko

6. The Vast of Night
“The Vast of Night recaptures the brilliance of the original run of The Twilight Zone better than either reboot of the series has. While the film has its fair share of visually spectacular moments, it exhibits a fundamental understanding that visual spectacle is neither a match nor a replacement for well-acted, character-focused storytelling and innovative craftsmanship, resulting in a film that feels pleasantly nostalgic and excitingly fresh all at once.” —Ciara Wardlow

5. The Painter and the Thief
“It began with a gallery heist caught on tape. Two massive paintings stolen in broad daylight. The painter, stunned by the loss, became fascinated by one of the thieves. He would become her unlikely muse and unexpected friend. However, this story is not as heartwarming as that setup might suggest. Truly, this is one of the most riveting docs of the decade.” —Kristy Puchko

4. Miss Juneteenth
“At once a portrait of a woman, a relationship, and a community, Miss Juneteenth feels at once intimate and expansive. Heartwarming but realistically bittersweet, it’s a subtly layered and nuanced portrait of Black womanhood, about having the audacity to dream and pursue something for one’s self, and a shining debut from an up-and-coming filmmaker who ought to be on your radar.” —Ciara Wardlow

3. Swallow
“By blending dark humor and unnerving visuals to explore the story of female experience through self-destructive rebellion, Swallow feels like a sister film to two of my personal favorites, David Wnendt’s sickening coming-of-age comedy Wetlands and Agnieszka Smoczynska’s psychological satire Fugue. Yet Mirabella-Davis charts a course all his own, by breaking his heroine out of the movie’s initial theatricality to reflect her personal evolution. In doing so, he’s created a film that is alive with humor, horror, and humanity, and positively punctured with surprises.” —Kristy Puchko

2. Shirley
“Decker’s directorial chops are undeniable. Sturla Brandth Grøvlen’s darkly dreamy cinematography hits all the right notes. Sarah Gubbins’ screenplay is solid even if somewhat self-indulgent in its navel-gazing, as is only befitting its academic ivory tower setting. Moss is great, as usual, as is Michael Stuhlbarg as the gregariously charming but quietly repulsive Hyman, and their utterly toxic and yet strangely reciprocal partnership is easily the most intriguing relationship dynamic on display. That said, Odessa Young is the real standout among the cast, bringing a remarkable depth and nuance to Rose and her tale of an ingénue’s fall into disillusionment that in other hands could have easily been something irredeemably trite.” —Ciara Wardlow

1. Driveways
“A phenomenally gentle, gorgeously poignant film about the two ends of life—growing up, and growing old—Driveways is the sort of healing experience we might all need right now. Remember how you felt when Sean Maguire tells Will Hunting that it’s ‘not your fault?’ That’s the vibe of Driveways, the whole way through.” —Roxana Hadadi

Some of these movies are now streaming! Check our guides to the best movies now on Netflix, Hulu, Prime Video, Apple TV+, HBO Max, Showtime, and Disney+.

Is there an art house offering that you loved, but didn’t make our list? Shout it out in comments!