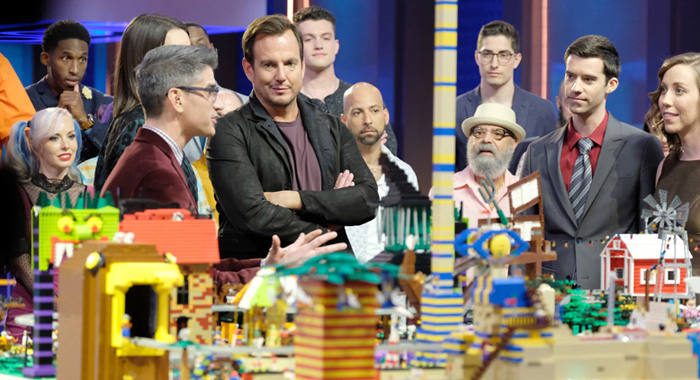 'Lego Masters' Is Family Friendly and Neat to Look At, But That's About It

As some of you know, I’m not just a weird chronicler of Meghan McCain meltdowns on The View, I’m also a father — somehow. So as the delta of the house, I’m tasked with the teeth-pulling chore of finding family-friendly entertainment to watch at night, which only gets worse during the winter tundra months. Someone has to distract these kids before they figure out they can very easily take me in a fight and, great, now the car’s missing.

Anyway, the good news is that Fox’s new reality show Lego Masters is a hit with the youngins, so don’t be fooled by the odd 9 PM time slot on a school night. (We caught it on Hulu the next day.) Both of my kids loved the first episode and are pumped for the next. In a nutshell, two-man teams battle it out to see who can the build best Lego creation that week and advance to the next round. It’s a basic concept that, on paper, should have tons of potential due to the creativity and ingenuity involved with executing a masterpiece out of tiny plastic bricks. And to Lego Master’s credit, the premiere episode definitely pumped out some imaginative as hell designs that thrilled my daughter and son. Krystle & Amie’s Fairy Wonderland and Christian & Aaron’s Space Land were big hits.

The catch with Lego Masters is that, while it’s neat to look at, so far the show is really lacking in depth and a little too focused on reality TV schmaltz that totally didn’t make me misty-eyed when the father and son team of Manny & Nestor got emotional about how blessed they are to have this deep connection building Legos together after all of these… years. Excuse me… oh god…

While the end results were mostly impressive, Lego Masters barely scratched the surface of each team’s building process if the cameras even showed it all. Christ, during the final round, I completely forgot Flynn & Richard were even on the show, which is a shame because their Spooky Town was one of the more ambitious creations. As someone whose fondest childhood memories are getting lost in Lego worlds sprawled across my bedroom, I would’ve liked to have seen way more of the building process instead of quick shots then suddenly — boom — there’s a finished product.

Each team had 15 freakin’ hours to build, so times 10, that’s 150 man hours of footage to pull from. I get that the show only has 45 minutes to work with, but I’ve seen deeper dives into artistry and skill on Kids Baking Championship. For example — Spoiler alert? — we saw Boone & Mark’s Timber Town roller coaster shit the bed, but it would’ve been cool to see what mechanism they used and why it crapped out. Maybe I’m expecting too much for a network reality show, but it’s disappointing to see Lego shirk its greatest hook — the thrill of creation — for a flashy TV production.

As for host Will Arnett, he does a great job keeping things lively while handing off the technical aspects of the show to Brick Masters Amy and Jamie. (What the hell is a Brick Master? They work for Lego. You’re welcome.) That said, there is a very surreal quality to seeing Arnett host the show and trying to separate it from BoJack Horseman. Maybe I’m just dead inside, but this whole enterprise seems like the sort of depressing kick in the teeth gig that BoJack would lampoon. And not to be — I’m so sorry — superficial, but there’s just something about Arnett’s face that says, “I’ve made a huge mistake.”

But, again, my kids loved it!

(P.S. Sam is an absolute dick to Jessica, and I’m not here for it.)

← Stream It Or Nah: Netflix's 'October Faction' Is 'The Snowman' Of Comic Book Adaptations | Being Called a 'White Woman' isn't the Same Thing as Hate, Heidi Klum →