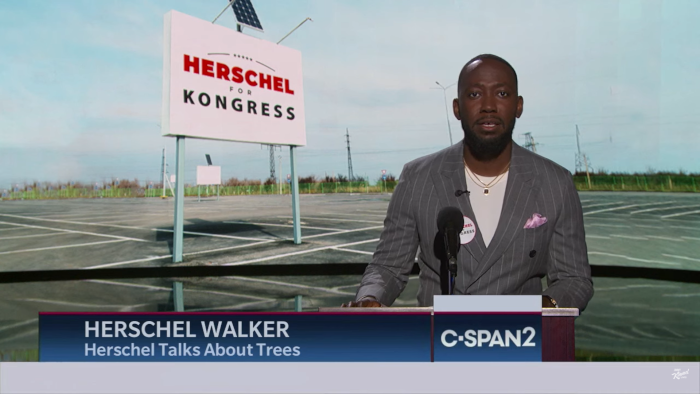 I know what you’re thinking. Hasn’t Herschel Walker been running for the Senate for eight years? Every time I hear him speak, it seems like months of my life slip away. Acknowledging the fact that he has even made it this far in the race feels mind-boggling. But he has, and until his opponent, Raphel Warnock’s hand is raised in November (ideally), we only have one recourse; to roast Walker’s ass like the joke that he is.

That was what guest host Lamorne Morris set out to do on Jimmy Kimmel: Live last night. Morris, best known for New Girl (though it should be for Game Night, which absolutely rules), has been crushing it in Kimmel’s chair, and last night added a memorable moment to his tenure. He impersonated Walker in a way that felt both effortless and hilarious.

If you’ve listened to Walker speak, you’ll know that he almost feels beyond parody. How do you make fun of someone so truly incoherent? You use that incoherence to your advantage. Hell, you dial up that incoherence because aside from going on stage and staring blankly at the camera for twenty minutes, you’ll never seem more absurd than Walker himself.

← Horatio Sanz Accuser Claims Jimmy Fallon, Lorne Michaels and Tracy Morgan Enabled Sexual Assault | The Best of That 'But It Came Out In 2007' Twitter Meme →