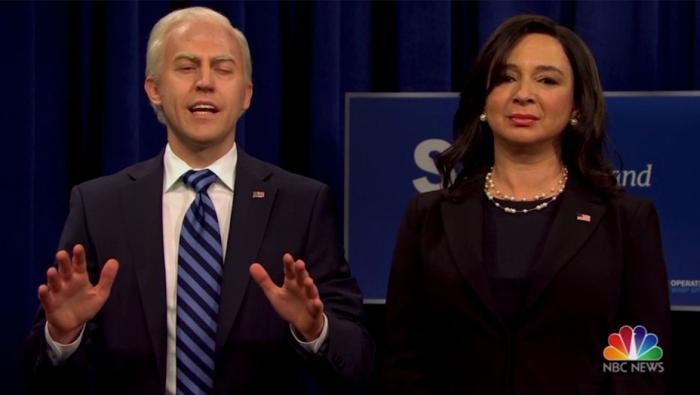 Kristen Wiig Hosts 'SNL,' Che and Jost Swap Jokes, And We Get a New Biden

Cold Open — The cold open covers Mike Pence — and his short sleeves — getting the vaccine. Maya Rudolph’s Kamala Harris returns to slap Pence for suggesting that Trump won the election, and Jim Carrey is out as Joe Biden. He’s been replaced by Alex Moffat, who acquits himself adequately in a short appearance. Kenan’s back for the winter finale, too, playing Ben Carson, who has no idea what his job is (Aidy is still gone, and it appears that Cecily is out again, too). There’s nothing special about Moffat’s Biden (yet), but it’s nice he’s being played by an actual cast member so we don’t have to put up with celebrity roulette for the next four years (assuming Trump doesn’t declare martial law and overturn the election results). (Score: 5 out of 10)

Kristen Wiig Monologue — Wiig apparently had twins this year, but somehow, I had no idea. She sings “A Few of my Favorite Things” with some amusingly absurd lyrics, and Maya Rudolph and Kate McKinnon offer their own insane alternative lyrics. It’s all very silly, but fairly inconsequential. When Wiig hosts, it always reminds me that while I love the hell out of her, I never liked her all that much as a cast member on SNL. (Score: 5.5 out of 10)

Secret Word — Wiig is back, and so therefore is her game show “Secret Word,” where she plays a has-been Broadway actress who has to get her partner to say the secret word, but she gives it away every time. It’s a Kristen Wiig skit, but it’s Kenan and his reaction shots who salvages it every time. (Watch Here) (Score: 5 out of 10)

Christmas Morning — It’s a Christmas song, about a family who gets a whole lot of presents, except for poor Mom, who got a robe and suffers in silence while the rest of her family has the day of their life. I think there are a lot of Moms (and Dads) who will appreciate this one (but not you, Haz, because I’m sure Mat will be very good to you this Christmas and make breakfast for the entire family while you sleep in, right, Mat?). (Score: 7 out of 10)

U.S.O. Performance — Kristen Wiig plays a military nurse in WWII who — along with Bowen Yang — perform a risque song for the troops where Wiig plays the male and Bowen Yang plays the woman. Dua Lipa cameos, too. I don’t really know what’s going on here, and while it looks like it should be funny, it’s actually not. (Watch Here) (Score: 4 out of 10)

A Teacher — A commercial for season two of A Teacher, where a student tries to hit on an older teacher played by Ego Nwodim who wants nothing to do with the student. “You think I have enough money to throw this job away for your limp ass Weiner?” Nwodim kills it, but Wiig kind of brings the skit down in the end (I swear I like Wiig! Just not on SNL!). (Score: 6.5 out of 10)

Home Alone 2 — Kevin has a room at the Plaza and a credit card, and when he finally agrees to use it to get the pigeon lady her own room, the Joe Pesci and Daniel Stern characters (Mikey Day and Kyle Mooney) arrive and, uhm, the pigeon lady gets really violent. (Watch Here) (Score: 4.5 out of 10)

Weekend Update — Since this is the last “Update” with Trump as President, they open with a montage of Trump’s greatest hits set to “Closing Time.” It’s funny/appalling. Chris Redd as Smokey Robinson stops by to talk about the holidays. I missed it, but apparently, the real Smokey Robinson mispronounced the hell out of Hannukah, and this segment is about how Smokey just found out about Jews. Somehow, it’s the funniest segment of the night. Kenan’s Willie (Che’s neighbor) is back, too, with the COVID edition, and holy shit, it’s dark/funny. Che also delivers an excellent Tom Cruise joke, before Che and Jost swap jokes again with an incredible joke at Scarlett Johansson’s expense. (you can ignore Heidi Gardner’s Instagram influencer segment). (Score: 8.5 out of 10)

Aunt Sue — I think we’ve seen Wiig’s Aunt Sue before (or the character is very similar to other Wiig characters, like Target lady). Here she can’t contain her excitement over a surprise at home. The character is funny, but there’s not a lot of mileage in it. (Score: 4 out of 10)


← Good for Her: The Art of Vengeance in The Dressmaker | 5 Shows After Dark: 'Doomsday: The Missing Children' on ID, 'Garth and Trisha Live!' on CBS →