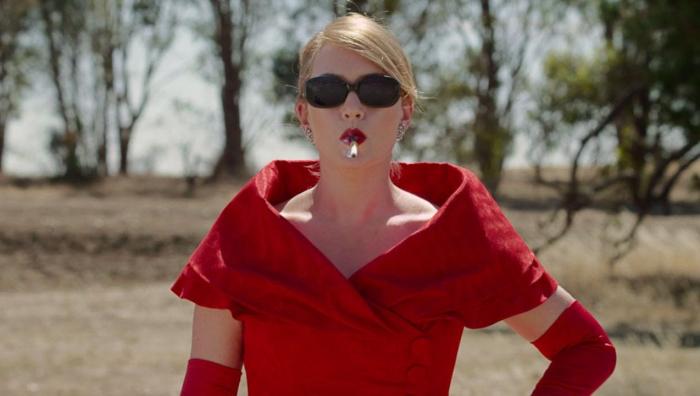 Good for Her: The Art of Vengeance in The Dressmaker

The difference between revenge and vengeance is so narrow that it’s challenging to find a unanimously agreed upon differentiation between the two. Though I have a deep appreciation for contextual accuracy (few things are better than hitting on a word that’s just right), pedantry bores me to tears. So while the general consensus is that the two are interchangeable, over the years the term “vengeance” has taken on a sense of righteousness, whereas its shorter cousin “revenge” maintains an air of over-the-top pettiness around it. Revenge is pouring sugar into an unfaithful lover’s gas tank, vengeance is tracking down the person responsible for killing a loved one.

In the 2015 film The Dressmaker, what is initially sought is answers to a lingering mystery. What’s found, however, is vengeance. While “revenge” is a perfectly cromulent means of summarizing what occurs in the film’s climax, it has far less to do with a transitory sense of payback and more about readjusting the cosmic scales of justice before finally opting to throw them away entirely.

Set in 1951 in the fictional Australian town of Dungatar, a place so small and parochial that it makes the average one stoplight town seem like a metropolis. Tilly Dunnage (Kate Winslet) has returned after a 25-year absence, during which she apprenticed in dressmaking under renowned European designers. She has returned to see her mother, Molly (Judy Davis, who practically yanks the film out from under Winslet), in order to get answers about a shadowy part of her childhood: Did a young Tilly (Darcey Wilson) murder classmate Stewart Pettyman (Rory Potter)? The only thing Tilly knows for certain is that the incident was traumatic enough for her to involuntarily repress the memory of what exactly happened; all she knows is that it resulted in her being put into the back of a police car. That officer, Sergeant Farrat (Hugo Weaving) is still on duty, and the first to welcome her back to town, as he is the sole person who feels any amount of remorse about the situation. The remainder of the townspeople are, for the most part, a general assortment of the worst sort of people that small town life can offer. There’s the doddering pharmacist, Mr. Almanac (Barry Otto), the hellish schoolteacher Beulah Harridiene (Kerry Fox), and the vile Mayor Evan Pettyman (Shane Bourne), along with a number of hard-hearted and small-minded villagers. Over the course of the film, Tilly’s dressmaking skills slowly win over the ladies of Dungatar, because despite their belief that Tilly’s cursed (as well as Molly, guilty of the apparent crime of being a single mother) not to mention a murderer, she makes them look damn good. The only person who takes up for Tilly, as well as emerges as a love interest, is Teddy McSwiney (Liam Hemsworth, who positively smolders in this role; there’s a scene involving Tilly taking his measurements that never fails to leave me utterly weak), the hunky neighbor whose family are also resident outcasts. As Tilly’s memories resurface, secrets begin to come to light. Soon after, the cogs of revenge fall into place and start turning, resulting in a wave of death and destruction.

Based on the book by Rosalie Ham and directed by Jocelyn Moorhouse after a lengthy twenty-year absence from film-making, it’s billed as a combination of ‘comedy/drama/revenge,’ the genre variations being one of the multiple reasons why this film is quite divisive among reviewer circles. Count me as a fan, because I unabashedly adore this film. I love the abrupt tonal shifts and the direction, as well as its willingness to descend into an almost indulgent flurry of retribution. Moorhouse has stated that she wanted the film to read as a fable with elements of magical realism. That it does, as the particular violent madness that takes place feels like it’s plucked right out of a Grimm’s fairy tale.

What’s great about this madness is that it waits until the third act to actually rear its head. There’s glimpses of the film’s inclination for madcap capriciousness early on, such as the scene when Sergeant Farrat (Weaving fully invoking his The Adventures of Priscilla, Queen of the Desert persona here) confiscates Tilly’s trunk and, only after ecstatically fondling an assortment of dyed and sequined textiles, emerges with yards’ worth of fuschia fabric, which he proceeds to drape across his body and admire himself in a collection of mirrors hanging from a tree while Delibes “Flower Duet” plays. Like I said, this film embraces its zaniness. But outside of these comedic dips, the movie maintains a fairly straight dramatic face until the final twenty minutes, when the last of its tenderness has been drawn out and left as a thing of the past, leaving only rancor in its wake. Suddenly it’s hell on wheels.

(Major spoilers from here on out)

The people that these miseries are visited upon are small-town parodies, caricatures—a term that’s almost always used disparagingly, forgetting that there’s plenty of occasions for caricatures to be deeply amusing, as well as markers for action, as seen here; and ultimately, I don’t need to see each person’s inner life to know they’re horrible—who are deeply ugly people on the inside, despite their now lovely exteriors. Between that and the hurts inflicted on Tilly, who at this point has now lost the two people she cares about most in this world, the Dungatar residents’ suffering is more than welcome. The abruptness of each incident infuses each with a slight sense of glee. When old Mr. Almanac drowns face-first in a large puddle and Harridiene catches a flying Singer case in the face, it’s shocking as well as darkly hilarious. And although Tilly and a now-deceased Molly are only, at most, indirectly responsible, the horrified villagers still blame Tilly, despite the fact that these two incidents truly can be chalked up as freak accidents. But then the action ratchets up considerably, when Pettyman’s wife, Marigold (Alison Whyte), confronts her husband, after Tilly informs her of just how insidious he truly is. As he attempts to gaslight her, a tactic he has used countless times before, Marigold proceeds to whip out a hidden kitchen knife and slices him along the backs of his ankles. It’s completely unexpected and deeply disturbing, and as Marigold leaves Evan on the dining room floor bleeding to death, he repeatedly (and insincerely) yells, “I’m sorry,” to which she retorts, “Not as sorry as I am” before slamming the door on him. It’s brutal, but it’s hard to think anything other than “good for her.”

Tilly’s flashiest display of revenge, however, is reserved for Dungatar itself. With no one left to reside in her mother’s home, she douses the entire thing in gasoline, making sure to send a bolt of cloth down the hill towards the rest of Dungatar proper. The village, empty since its residents are either dead, being taken away by the authorities, or are on a group trip a few towns over to win a performance competition (their chances of winning having been marvelously fucked over by Tilly), is little more than wood structures surrounded by dry kindling. Dungatar and its residents have caused Tilly a wealth of suffering her entire life, leaving her to feel like an outcast and depriving her of a relationship with her mother. And like a fairy tale character undoing an evil spell, immediately before tossing her flaming lighter into the fuel-covered structure, she announces, “Tilly Dunning is no longer cursed.” As she walks away, she takes one last look back at her mother’s house now covered in flames, every other building soon to follow, before continuing on to train station. We have now reached catharsis. As Tilly boards a train bound for Melbourne, one of the crew members notices the enormous smoke plume rising up in the distance: “Burning off rubbish, were they? Looks like they overdid it.” to which Tilly responds, “You never met the rubbish.”

It’s not advisable to burn down people’s houses or be indirectly (or directly) involved with their deaths, but most films that revolve around catharsis by way of revenge are almost always journeys undertaken by men. Women who seek revenge are historically the villain, though in recent years, more films have placed female leads into the role of righteous vengeance seekers, however it’s typically in the fashion of those previously mentioned male action films. While there is nothing wrong with women wielding a gun and throwing punches, it’s refreshing as hell to see a women seek vengeance on different terms. No montage of workouts and shooter drills here. Just a simple fire and a willingness to walk away. And while I, personally, put a lot of faith in the power of walking away (no, seriously, try it), watching our fictional characters wield vengeance upon wrong-doers not only makes for a good story, it also provides us the pleasure of experiencing catharsis for ourselves.

The Dressmaker is available to stream on Amazon Prime.

Kaleena Rivera is a writer. When she isn’t wishing that Liam Hemsworth would do more romance films, she can be found on Twitter here.