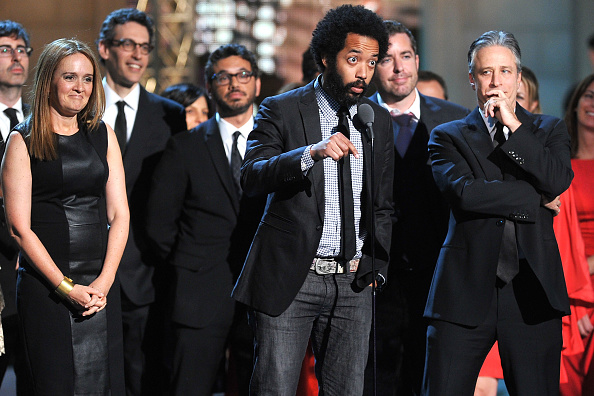 Listen: I love Jon Stewart; I loved his The Daily Show; I love the effort he put into fighting for the health of 9/11 first responders; and I appreciate the stable of comedians he helped to launch over on The Daily Show for 15 years, not least of which are Stephen Colbert and John Oliver. I can also recognize that Stewart — like Tina Fey — kind of got frozen on the woke spectrum around 2014, while their counterparts continued to evolve, see e.g., Jon Stewart’s directorial effort, Irresistible.

More than that, the thing that will always hang over Jon Stewart’s head will be his treatment of Wyatt Cenac, with whom he had a huge argument over race. Jon Stewart would eventually apologize to Cenac, but Jon Stewart never did do what was necessary there, which was to admit he was wrong. Years later, it still doesn’t still well with Cenac.

In any respect, in 2018, Cenac would go on to host his own HBO show, Wyatt Cenac’s Problem Areas, a weekly series in which he undertook “a journey to understand some of the big issues of the moment and investigate real-world solutions.” (Stewart was not involved in the series, although interestingly, John Oliver was an exec producer). The show was canceled after two seasons.

Meanwhile, yesterday, Jon Stewart announced the title and format of his upcoming weekly series on Apple TV+. The show is described as “a multiple-season, one-hour, single-issue series which will explore topics that are currently part of the national conversation and his advocacy work.” And the title of the series? The Problem With Jon Stewart.

On the plus side, at least Stewart — who was criticized for and eventually acknowledged the lack of women on the staff of The Daily Show (which Stewart also sought to correct) — hired a woman to be his showrunner and head writer (Brinda Adhikari and Chelsea Devantez, respectively).


← Regé-Jean Page Appears to Confirm He Was Denied Role in D.C. Project Because of Race | Stephen Colbert Wants You To Know That Shasta Is Up For Anything →