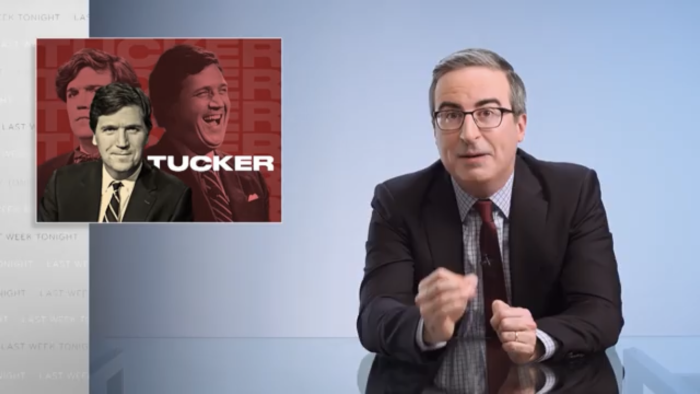 Some people are so blatantly condescending and awful and remarkably hateful that the mere sound of their voice makes your ears want to retreat into your body and seal themselves off from the noise. All of those people are Tucker Carlson. He makes writing about late-night segments difficult as he is often a source of scorn and derision (as he should be). This week, he’s been pulled even more into the “spotlight” by John Oliver.

Oliver took time this week to talk about Tucker’s hateful, arrogant, dumb face on Last Week Tonight. What I appreciate about this deep dive the most is that it’s easy for more progressive people to dismiss Tucker. He does come across as just another sh***y provocateur. However, it’s much more insidious than that, as is highlighted by the piece.

I’d also be remiss if I didn’t say that watching John Oliver dunk on Tucker’s dumb, stupid face made watching said dumb, stupid face all the more enticing. Referring to him as a “relentlessly indignant picket fence” was a Grade-A burn dripping with elegance. People like Tucker should be vivisected like this as it makes clear their true danger.


← Box Office Report: 'Raya and the Last Dragon' Stays on Top | Give Yourself A Feel Good Moment And Watch Tiffany Haddish Find Out She Won A Grammy →