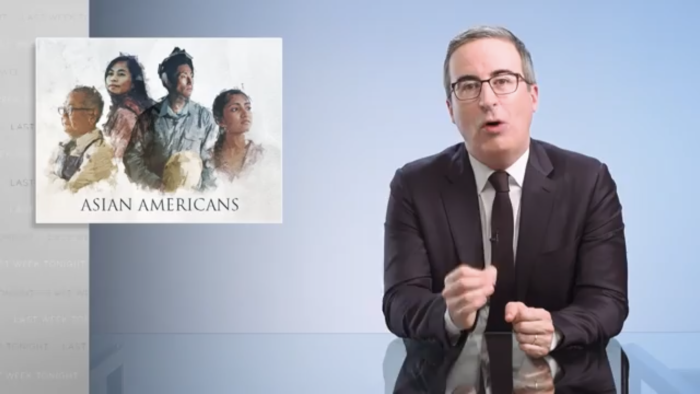 John Oliver is the first to admit that white people have, at best, a sh*t history when it comes to explaining what Asian Americans go through. To a degree, that’s the point of his latest deep dive on his show Last Week Tonight. He turns an eye towards a group of people that are often misunderstood and misrepresented. The results are detailed and enlightening.

Oliver covers a lot of ground in the 27-minute segment, pointing out that even that amount of time only scratches the surface. He discusses the “Model Minority” myth, America’s horrid treatment of Japanese people during World War 2, Asian Americans in U.S. History, and more. The segment is dense, even for Oliver, who is known for doing these types of reports.

The sheer amount of detail and lack of “trying to act like he has all the answers” make this episode a must-watch. There’s something truly shocking about seeing how long and how pervasive our nation’s treatment of Asian American’s has been. It’s impossible to even narrow down. Everything you think Oliver has told the most f***ed up part of his coverage, he hits you with more.

These types of truths are uncomfortable and in a country that is actively trying to whitewash our history. We can’t turn a blind eye to how we treat a whole group of people because it will only allow that behavior to continue.

Show this video to your friends, your relatives, your AIM Instant Messenger Friends List. Even if they think they know it all, they still may learn a thing or two. Turning a mirror on ourselves is important if we want to grow and change for the better and let’s face it, that’s something we desperately need to do.