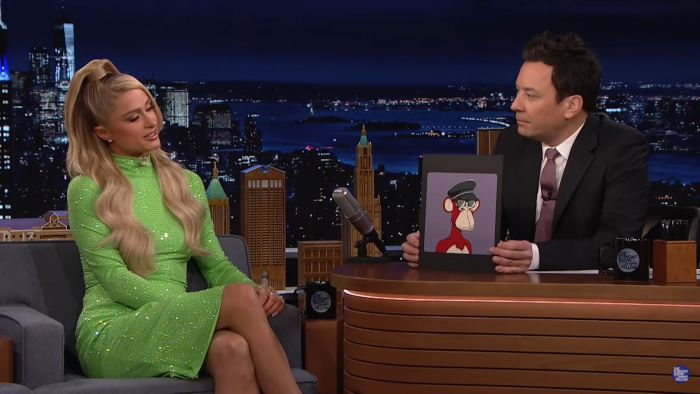 I usually try to keep it positive on this site. I’ve slipped now and then, but I like writing about things that I like. However, every once in a while something happens on a late-night talk show that makes me think:

This time the headache-inducing segment involved Paris Hilton appearing on The Tonight Show with Jimmy Fallon. First, she talked about her wedding and attending a Burning Man-like event that seems oddly sanitized. That’s whatever. I am not a fan of professional celebrities like Hilton. But live your life, do your thang, be you, boo, etc. I’m sure her wedding was a lot of fun, and who wouldn’t wanna hear Demi Lovato sing I Will Always Love You?

The point where this interview takes a real hard left turn into F*** Off-Ville is when Paris and Jimmy start discussing NFTs. You know, the pyramid scheme that takes monkey pictures and turns them into digital artwork that anyone can copy and paste? The “art” that gives Twitter Bros a smug sense of exclusivity because they possess an overpriced blockchain? You know, the new art craze that is incredibly dangerous to the environment because they help make the planet too… what’s the word?

(Two gifs in one article! That may be a record for me.)

NFTs are the worst, and chances are your dad has bugged you about getting one. I know mine has! One of the craziest things about NFTs is the willingness with which people will defend their supposed uniqueness. That madness is on full display here as Paris and Jimmy compare their ape photos. They present two different pictures of the same ape with different clothes on and act like each one reflects their personalities. It is bonkers. I know Paris is kind of low-key in her demeanor but Jimmy Fallon is always at an 11 and even he seems like he’s having a hard time pretending to be interested, which is saying something.

This certainly isn’t the first or last time a fad has made its way onto late-night TV. I remember being very excited to watch an episode of Conan years ago where I learned that I could own an acre on the moon. There’s just something about NFTs that seems sillier and more destructive at the same time. Paris even tries to spread the nonsense by giving her own NFTs to the audience. That said, late-night shows have “Applause” signs to up an audience’s enthusiasm. I’ve never heard an audience break into forced applause as awkwardly as they do in this interview. It gives me hope that maybe NFTs won’t become more of a thing.

But I’ve been wrong before.