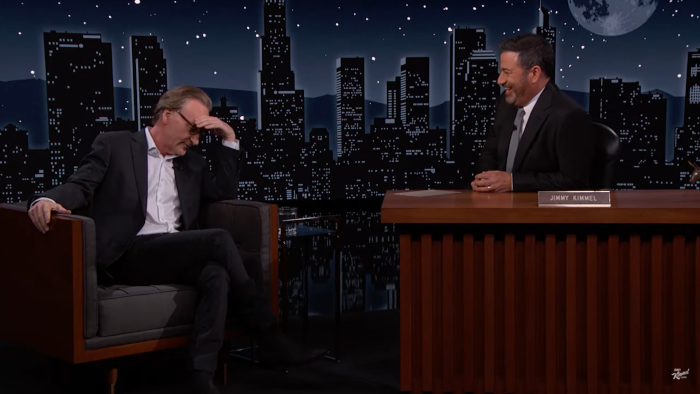 Bill Maher Wants You To Know That He Lives In A Pretentious, Privileged Fantasy World

Here I was, thinking that Mike Lindell would be the worst person to watch on Jimmy Kimmel: Live this year. Every now and then, Bill Maher emerges from the ivory tower that is his long-running HBO show to remind the general public that he A) exists, and B) still doesn’t know much about the world that surrounds said tower. At one point, he makes a joke about saying good morning on Twitter only to get blasted for his white privilege. Spoiler alert: his fictional twitter assailants are not wrong and I guess you can count me among their ranks.

To start the interview, Maher talks about weed. He makes a point to say how freely he can discuss weed now and how things are so much better because you can buy it at the store. It is such a tone-deaf, privileged take that it feels like he’s intentionally goading people into reacting. Well, bait taken. The reality is, not only is most of the country not the pot paradise that he describes, people of color are disproportionally affected by marijuana enforcement laws. Even in my home state of New York. In 2020, almost 57% of the NYPD’s marijuana arrests were Black people, and almost 36% were Hispanic people. White people, like Maher, made up only 5% of arrests.

I like smoking pot too, Bill. I do it outside because I have two small children. Since I wait until they are in bed at night, I’m out in the dark when I do it. Guess what I’m not doing? Parading around like everyone is going to be fine with it. Even though it is technically legal here too. All of this isn’t even bringing up the fact that Maher is, ya know, a celebrity. The whole conversation starts because he brings up that Jimmy gifted him with pot the last time they saw each other. He even jokes that he hasn’t purchased pot since 1989. Things are different for rich, well-known people. Hope I’m not blowing any minds with that tidbit.

As the interview continues, Maher laments the fact that more Democrats are worried about going to the hospital with COVID than Republicans, despite the chances being low. First off, no shit. Second, this is again an oversimplified view of events that lacks any semblance of empathy. Remember the two kids I mentioned earlier? They are both six months old. That means they have yet to be vaccinated. Because of people that aren’t taking the pandemic seriously, I could still contract COVID and possibly pass it on to my children. Maher knows this. He got COVID, after being vaccinated, and canceled his show that week because of it. He knows the risks. It’s just another example of how, at least on the surface, he lives in a privileged fantasy world, and he thinks everyone else does too.

At one point, Maher even brings out the old “we never used to talk about politics” argument. He complains that Liberalism used to be about a “color blind” society. Kindly f*** right off with both of those points, sir. Everyone hasn’t always had a say in what liberalism “represents” and honestly, they still don’t. People of color don’t want a color-blind society. White people do. Also, people don’t talk about politics when it doesn’t affect them. It’s almost as if, for most of his life, certain people have been able to coast without thinking about the issues. Interesting.

To say, as he does, that people need to stop talking about politics so much is possibly the most entitled and tone-deaf thing he says for the whole interview. It’s almost as if he doesn’t know that Texas is actively trying to ban women’s access to healthcare. Either that or he doesn’t care. It doesn’t affect him, so why should he? Good thing he doesn’t have, I dunno, a weekly political talk show where he invites everyone from sitting politicians to serial liars and political firebrands to debate the very issues he thinks we shouldn’t be discussing. OH WAIT!

To top everything off, this smug shell of a human being manages to turn the death of Norm Macdonald into another talking point. Is it as pointed as the rest of his “hot takes”? No. Should it have still been a situation where he just praised someone without taking a shot at others? Of course, but then he wouldn’t be Bill “I’m right and everyone else is dumb” Maher.

Maybe I’m wrong. Maher does, eventually, get Kimmel’s audience firmly on his side. Despite having to coax them into clapping early on in true Jeb Bush fashion. Maher would like to live in a make-believe world where everyone is free and happy and can live their lives like a white man with a fat HBO contract. That much is clear. I would just like to live in a world where people display basic empathy and understanding for people that don’t have it as easy as they do. Unfortunately, both are pretty unrealistic.