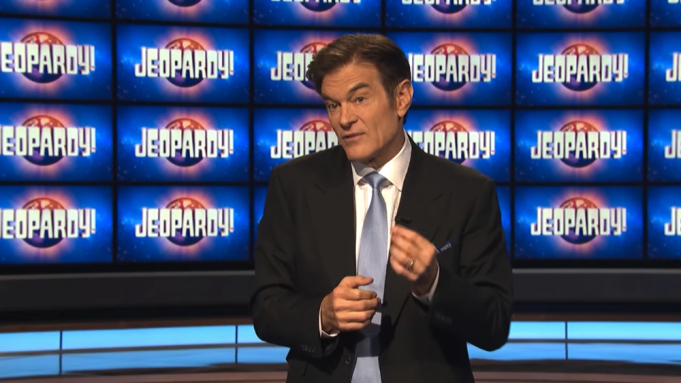 'Jeopardy' Fans and Former Contestants Are Not a Fan of Guest Host Dr. Oz

Jeopardy continued its efforts this week to make Ken Jennings look like the best of a series of bad options, so far, as the eventual replacement for Alex Trebek by bringing in Dr. Oz, which is a bit like bringing in a Gas and Oil CEO to run the EPA. In other words, it feels like a relic of the Trump Administration — fitting, because Dr. Oz touted hydroxychloroquine as a COVID-19 treatment — and Jeopardy fans have not been keen on the choice.

In fact, over 500 former contestants have signed a letter expressing concern over the choice of Dr. Oz as guest host, asserting that Dr. Oz “stands in opposition to everything that Jeopardy! stands for. Jeopardy! is a show that values facts and knowledge.” Among the concerns they cite are Dr. Oz’s history of “promoting supplements that do nothing, legitimizing gay conversion therapy (which is banned in California, as well as 19 other states), and dangerous ‘cures’ for autism.” The letter further adds that “Dr. Oz represents what has become a dubious trend in America: the elevation of the credentialed talking head at the expense of academic rigor and consensus.”

Fans are livid, although my favorite response, so far, has been Michael McKean with the low-key, polite insult:

Seems like people are really looking forward to Dr Oz wrapping up his time on Jeopardy.

That is an understatement, at least relative to other responses.

Dr. Oz is guest hosting Jeopardy. Categories will include:
1) Doctors Without Ethics
2) TV Surgeons Who Might Be Unlicensed
3) Physicians Your Nana Thinks Are Sexy
4) Attention Addicts Who Would Endorse Placebos
5) Malpractice Suits Waiting To Happen
6) Creepier Than Dr. Phil

I don’t think Dr Oz should be hosting a show about facts. #Jeopardy

How most #Jeopardy fans are feeling about Dr. Oz.

so I’m just expected to sit through 2 weeks of dr oz hosting jeopardy n not set my house on fire?

Social media users, in fact, would be hard-pressed to find anyone who supports the choice of Dr. Oz, and anyone who might is unlikely a fan of the trivia show because, as the former contestants have stated, “to invite Dr. Oz to guest-host is a slap in the face to all involved.”