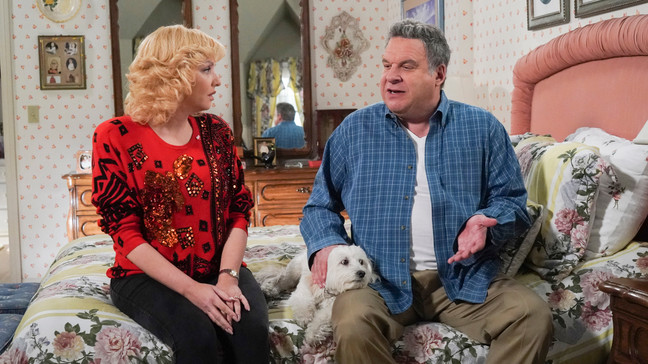 Jeff Garlin Said He Hated Working on 'The Goldbergs.' Clearly, the Feeling Was Mutual

I cannot for some reason leave the Jeff Garlin story alone. I’m fascinated by this guy’s decision to blow up an easy, high-paying gig where all he had to do is literally sit in a recliner one day a week. It must be the easiest job in Hollywood. According to Variety, however, Garlin crapped all over The Goldbergs during a stand-up set he performed on the same day he gave that interview to Maureen Ryan over on Vanity Fair that may have contributed to his exit from the sitcom.

Trashing The Goldbergs, alas, is not new for Jeff Garlin. He’s been doing it on podcasts and in his stand-up act for years, although the timing here is interesting. From Variety’s Elizabeth Wagmeister, who attended the show:

The common theme of Garlin’s comedy show was how much he did not like the sitcom. He vented about how things have become too politically correct in comedy, and in a serious moment, expressed his concerns over censorship — like many other comedians have in recent years. Garlin said it’s not enjoyable for him to be in a workplace where he has to watch his every move and every word, and he felt like he’s on pins and needles. He said that he had been spoken to by higher-ups at the network about some things he had said, and specifically noted his shock that he can’t use the word “vagina” when speaking in jest.

Garlin said he doesn’t prepare his acts. In fact, most of his Nov. 24 show was based around an audience Q&A. After so much mouthing off about “The Goldbergs,” one person asked him, if he hates the show so much, why does he continue to do the show?

As Garlin noted in the Vanity Fair interview, there would be no issues with the jokes he makes on The Goldbergs on the set of Curb Your Enthusiasm, where he also works. What Garlin doesn’t seem to appreciate, for some reason, is that The Goldbergs is a traditional family sitcom while Curb Your Enthusiasm is decidedly not. Garlin does seem to appreciate the differences between the finished products, telling the audience in the L.A. show that he likes the sensibility on Curb but that the comedy in The Goldbergs “is not for me.” I’m sure creator Adam F. Goldberg is thrilled to hear from the star of his sitcom.

It’s worth noting that Garlin — who was also admonished for verbal and emotional abuse on the set of the sitcom — engages in “silly” humor where he yells, “Ow my vagina,” and jokingly combines words like “grandma” and “cock” on a family sitcom with younger actors. Granted, all the child actors are adults now, but these complaints about Garlin have been going on for years. If you’re Sean Giambrone, Troy Gentile, or Hayley Orrantia — who play his kids on the show — do you really want to hear that from your sitcom dad while he’s sitting in his underwear?

It’s also worth mentioning that their sitcom mom, Wendi Mclendon-Covey, comes from a similar comedic background (the Groundlings alum’s breakout hit, after all, was Bridesmaids), but does not similarly complain about not being able to say “vagina” in front of the cast and crew. She does not grouse about political correctness. She seems to be well-liked, doesn’t trash the show that provides her paycheck, and no one had to digitally superimpose her face on a body double to complete an episode.

On the other hand, if you scroll through Twitter, you’ll find that the person Jeff Garlin is most often compared to is Ellen DeGeneres, and not in a good way. That’s probably why I have yet to see one single cast member from The Goldbergs come to Jeff Garlin’s defense in the last few weeks. Jeff Garlin has mentioned in past stand-up performances that he hated working on The Goldbergs. Clearly, the feeling is mutual.