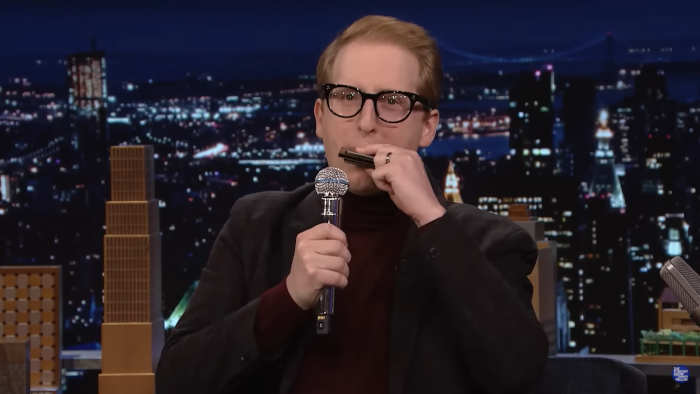 I first learned of James Austin Johnson through the soon-to-be-defunct social media site known as Twitter. In a video posted to his account, he was walking while talking like TFG. Not only was it an uncanny impression, but he was talking about Pokemon. He was riffing, as TFG, while talking about Pokemon. It was and is hilarious and I’d share it here were it not for it being on a site that is actively going to war with Apple.

You can see Johnson’s talents on full display on SNL. He plays Biden, TFG, and basically, any other white, male celebrity as needed. One of my favorites was an early turn as Larry The Cable Guy. Last night, James sat down with SNL alum Jimmy Fallon to talk about how he builds his impressions, and they shared their love of Bob Dylan.

The Dylan section is incredible. Johnson has a Dylan voice for every era and even brought along his own harmonica. I know people are going to complain about Fallon’s laughing in the comments, but it’s easy enough to ignore. I also get it. What JAJ (I’m just gonna go with that going forward) does here is impressive. There’s also a level of effortlessness to it.

There’s a good reason why what JAJ is doing looks so easy. He takes his craft very seriously. He’s not just trying to mimic people, he’s breaking down their vibe and style and building his impressions from the ground up. His explanation for how he crafted his Biden is fascinating. He’s not aiming for perfection. Like most great mimics, he’s trying to recreate the essence of these people. That’s what makes him good.

We’re likely looking at several years (if not more) of JAJ being on SNL, and I’m all about it. He is new, in a long list of incredible SNL mimics. In the future, he’ll be mentioned right along with them. Also, not for nothing, but the man can wear the hell out of a turtle neck.