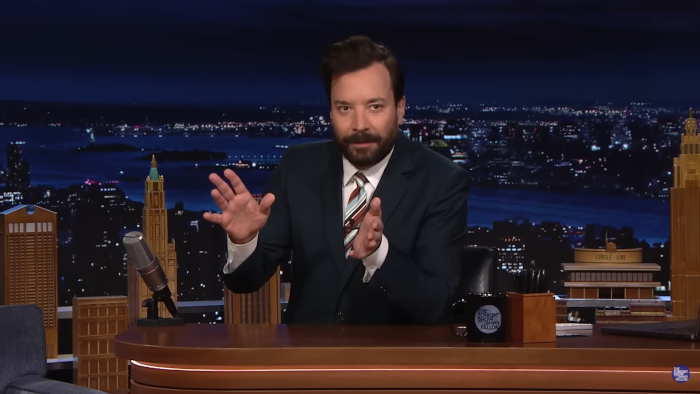 Jimmy Fallon was trending on Twitter when Donald Trump announced he was running for president again. It wasn’t because Jimmy tousled TFG’s hair. It was because #RIPJimmyFallon was making the rounds on Twitter this time. I think it’s easy to make jokes, but during this bit, we see more of a sad, defiant Jimmy. He may be playing up the response for the cameras, but I think, intentionally or unintentionally, it gives us a peek behind the curtain.

Fallon is not the most popular late-night host (though he’s no James “There’s a hair in my soup go die” Corden). He’s been the target of derision for how he runs the TV institution that is The Tonight Show. Now, I could make the argument that who is and isn’t a good host is subjective, but it’s not like I cover Jimmy very often on this site. I’m no tastemaker, but I’m not going to suddenly pretend that Jimmy’s The Tonight Show sparks any joy in my heart.

Regardless of my or any other person’s feelings toward him, seeing him grapple with the “rumors” of his death is truly sad. Not because he doesn’t handle it well — he does — but because he seems genuinely upset about it. Even when he starts the show with a choir singing “I’m alive” along with him, there’s a lack of enthusiasm or fun. It feels more like Jimmy being forced to tackle something because he knows it will help with his SEO numbers (and, gurl, I get it).

Jimmy has a writing staff at his disposal and likely didn’t have to scour through too many tweets using his death as a hashtag, but he had to have seen some, and it’s safe to assume that a lot of them were less than friendly. He then had to take that negative energy, put on a brave face, and go have fun with it. Yes, he’s getting paid, and it’s his job to roll with these kinds of things. That doesn’t change the solemn look that rests on his face for most of this segment.

I could be misreading the whole situation. Maybe Jimmy is totally fine with what transpired and chalks it all up to the price of doing show business. But, if that’s the case, there is something else going on with Mr. Fallon. The unbridled (sometimes to a fault) enthusiasm he often employs was not on display here. Instead, we see a sad man who just wants to make people laugh, and is realizing that his demise is what gets them there. It’s a real bummer.


← The '80 for Brady' Trailer Wastes a Phenomenal Cast on Tom Brady | Why Is Ticketmaster Still Terrible? →