In ‘The Daemon Cages,’ ‘His Dark Materials’ Reveals the Gobblers in Bolvangar and Makes Real the Horror of Intercision

Well, the Gobblers sure are monsters, aren’t they? The sixth episode of the first season of His Dark Materials, “The Daemon Cages,” makes explicitly clear what the General Oblation Board has been up to in its kidnapping of children: They are smuggling them to Bolvangar, they are holding them against their will, and they are cutting their daemons away. In work that is funded by the Magisterium and enacted by doctors who would rather kill children than stand up to the Magisterium’s power, the goal is to learn about Dust, and to stop the flow of Dust into children before they reach puberty. Mrs. Coulter talks about how intercision is no big deal, but Lyra sure calls her on that shit when she asks why Mrs. Coulter didn’t let the doctors go ahead with cutting Pan away from Lyra, doesn’t she? The best thing “The Daemon Cages” does is pair Mrs. Coulter and Lyra back together in light of the reveal that Mrs. Coulter is Lyra’s mother, and Ruth Wilson and Dafne Keen do impressively antagonistic work together as partners in that scene. 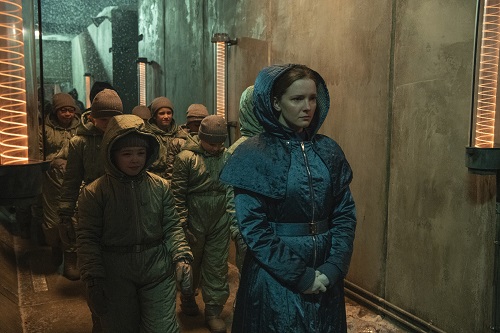 Before mother and daughter reunite, “The Daemon Cages” burns through a lot of story, as is Jack Thorne’s modus operandi for this season. In this 53-minute episode, we move through five proper chapters of The Golden Compass (“Bolvangar Lights,” “The Daemon Cages,” “The Silver Guillotine,” “The Witches,” and “Fog and Ice”) and check back in with Will Parry, too. I have been critical of the pacing of this season, obviously, and why change things up now? I adore that the first segment of “The Daemon Cages” is basically shot as a horror movie, with Lyra realizing how well-guarded Bolvangar is, reacting with shock when she sees Roger (which was a little surprising for me, because she hasn’t anticipated finding Roger here this whole time?), and then immediately sensing everyone’s fear when Dr. Cooper (the worst) comes in to collect Bridget McGinn. Dr. Cooper’s cool disgust toward the girl (“Don’t make a fuss”) coupled with the ominous nature of that padlocked metal door, and the utter vacantness of the nurse Sister Clara as whatever happened in the room? All of that combined into a very spooky glimpse into what is happening at Bolvangar, and it was even a little funny when Dr. Cooper snapped her fingers in Sister Clara’s face! That whole cold open was great!

I also appreciated the scenes between Dr. Cooper and Dr. Rendal and their discussions of their work, and I think the show does something interesting with Dr. Cooper, in making her seem like a true believer in the Magisterium in a way I buy more than Mrs. Coulter’s allegiance to them. Ruth Wilson is playing Mrs. Coulter like she always has a card up her sleeve, and like she knows the Magisterium is a source of power that she can manipulate. But does she actually believe in the Magisterium? I doubt it; she treats its individual representatives, aside from Boreal, with too much disdain to seem as if she also demonstrates true respect for them. That’s unlike Dr. Cooper, I think, who delivers the lines about “magnificent discovery” and “freeing generations from the tyranny of sin” with real feeling. When she says to Lyra during the intercision prep, “You’re doing something great, you’re part of something great,” that felt truly like a line to convince the child, not herself. Her utter disregard for these children’s lives is chillingly effective, and I was very pleased when Serafina Pekkala stuck a dagger through her heart.

Because once you see those pathetic, Eleven-looking children without their daemons, who wouldn’t want revenge? Interesting that the show has Lyra and Roger find these severed daemons and children, as opposed to the book, when Serafina’s daemon Kaisa helps Lyra set all the daemons free; it’s her choice to do this that alerts the staff of Bolvangar to a protestor amongst the children. In The Golden Compass, they choose Lyra for the severing experiment because they find her eavesdropping on them in the vents; I’m surprised the show didn’t choose to adapt that moment as a way to reference Lyra’s own connection with Mrs. Coulter and the golden monkey. But oh well—here we have Lyra stopping the intercision with her screamed admission that she is Mrs. Coulter’s daughter, and that leads to the excellent exchange between the two of them, with Mrs. Coulter attempting to defend the Gobblers and failing spectacularly, and Lyra realizing how very similar to her mother she might be. 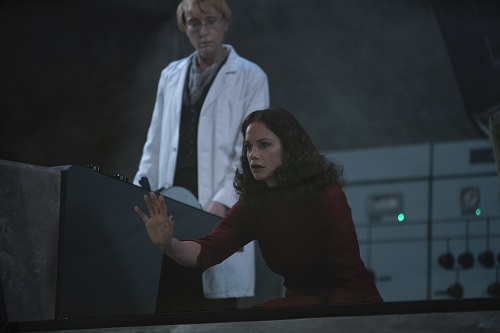 There are basically two sides of this conversation between Lyra and Mrs. Coulter: the communication of information about what the Gobblers are doing, with Mrs. Coulter explaining to Lyra that the mysterious Dust, when identified, is awash in adults and is seen as the cause of sin, and the first exchange between the two of them as mother and daughter. I love how committed Mrs. Coulter is to this idea that she never meant to hurt Lyra, and so that makes all of her behavior OK, coupled with her barely veiled disdain for Asriel. Think back to the first episode, when we see Asriel bringing Lyra to the Master of Jordan College during the flood—what was Mrs. Coulter’s involvement in that, if any? I wonder if the show will address more about the argument between Asriel and Mrs. Coulter over Baby Lyra, or if we’ll continue moving primarily forward instead of backward. If so, then I’m not quite sure how much worse Lyra and Mrs. Coulter’s relationship could get, since unleashing a spy fly in your mother’s face and locking her inside her quarters while you aim to blow up the building is pretty bad, as is kidnapping children, including your daughter’s best friend, and aiming to cut their daemons away to secure your professional career. Them screaming at each other through that door captured it all pretty well, I thought.

And then, all of a sudden, the Bolvangar stuff is over! And the Gyptians are just like … calling it good and going back home? There is an abruptness to how this storyline wraps up, before the final 15 minutes or so of the episode focus on Lyra’s trip in Lee Scoreby’s balloon toward Svalbard to find Asriel, that was somewhat jarring. Lyra’s “My father, I need to free him” functions as an ending to one part of this story, but then there’s the beginning of the next part with Lee and Serafina, and the continued discussion of Lyra as a child who is “destined to be important, to create and resolve conflicts,” and the reveal now that Lee should serve as a sort of protector for her. “She’s responsible for the fate of everything, and I’m responsible for her,” Lee says sort of wondrously, and then Serafina reassures him “The world is in your hands, Mr. Scoresby, and I am delighted it is,” and so when the balloon ends up ambushed by monstrous flying cliff-ghasts who result in Lyra tumbling out of the basket, that’s pretty fucking bad.

Does Lyra end up in Svalbard anyway? What did Mrs. Coulter’s meeting with Iofur Raknison from earlier in this season, and her promise of performing a baptism for him as an induction into the Magisterium, mean for how Asriel is being held by the armored bears? We only have two episodes to go, and more Iorek Byrnison and James McAvoy are always welcome.

+ Not much going on with Will Parry this week. The Parry home is still being watched by Boreal’s cronies. The cronies know that Will’s mother knows they’re there. That’s about it.

+ What vibe did you get from that Lee/Serafina interaction? I couldn’t tell if it was supposed to be, like, sort of romantic? I didn’t particularly like that! In the books, the first time the characters meet is when they team up to fight at Bolvangar, and as a result, their initial conversation includes Serafina basically explaining to Lee how witches work. I think it’s an excellent conversation that reveals a lot about her motivations vs. Lee’s motivations, so here you go, some book excerpts.

Serafina Pekkala considered, and then said, “Perhaps we don’t mean the same thing by choice, Mr. Scoresby. Witches own nothing, so we’re not interested in preserving value or making profits, and as for the choice between one thing and another, when you live for many hundreds of years, you know that every opportunity will come again. We have different needs. You have to repair your balloon and keep it in good condition, and that takes time and trouble, I see that; but for us to fly, all we have to do is tear off a branch of cloud-pine; any will do, and there are plenty more. We don’t feel cold, so we need no warm clothes. We have no means of exchange apart from mutual aid. If a witch needs something, another witch will give it to her. If there is a war to be fought, we don’t consider cost one of the factors in deciding whether or not it is right to fight. Nor do we have any notion of honor, as bears do, for instance. An insult to a bear is a deadly thing. To us … inconceivable. How could you insult a witch? What would it matter if you did?”

+ Other question-raising relationships: John Faa and Ma Costa holding hands on the way back from Bolvangar. What’s going on there?

+ Ruth Wilson continues to dominate with her line deliveries. Her “Well, that is unfortunate,” when Lyra tells her one of her friends has already died because of the Gobblers was hilariously droll, and her smile after “I am your mother” was so simultaneously devious and self-pitying.

+ Ahem In the books, the Gyptians don’t storm Bolvangar, but it is entirely Lyra who runs around the station and sets in motion its destruction, as well as having help from Roger and other kids to wrangle up everyone, have them fight back using snowballs aimed at Tartars’ eyes, and getting them outside. It’s another instance in the books of Lyra’s leadership, forceful personality, and aristocratic bossiness. The show staging the attack on Bolvangar as led by the Gyptians sure gives Lee, Ma Costa, John Faa, and Farder Coram more to do—Ma Costa snapping that doctor’s neck, my god!—but again turns Lyra, literally, into a passive observer. Following Lyra’s perspective through the labyrinthine Bolvangar so she could see various pockets of the fight was clever, but once again, the show removes Lyra’s own agency. (I sort of scoffed at her “What I’m best at: cause some chaos” line to Roger because of this.)

+ RIP, Dr. Rendal! His “This is a philosophical establishment, not a child chophouse” while he was taking Lyra’s mugshots made me laugh. Keep an eye out for that actor, Amit Shah; he’s going to be a regular on Netflix’s Henry Cavill show The Witcher.

+ Haunting: Lyra hearing the children crying in the dorms at Bolvangar.

+ Mrs. Coulter crawling through the vents to escape her quarters: One of the best examples we’ve seen in the show of humans mirroring the behavior of their daemons. Her crouch on the desk was great body positioning.

+ How were people walking around in the open-air Bolvangar without furs on and not freezing to death? IT IS VERY COLD IN THE NORTH. I HAVE CONCERNS.