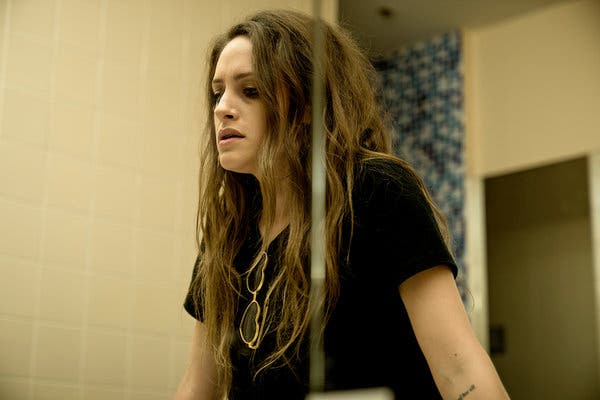 With only four episodes remaining of the entire series, it feels a little unusual this late in the game for Mr. Robot to set aside an episode for what is essentially a breather — a pause in the action — but after a series of incredibly intense episodes, it is a welcome respite. “410 Gone” is a good hang, one that also allows Darlene to reap the rewards of her hard work.

The episode picks up with Dom in the hospital, recovering from injuries sustained after being shot by her Dark Army handler. She recovers and goes back to her apartment, where she intends to carry on her relationship with her Alexa device and wallow in her misery. Darlene, however, refuses to allow it. She doesn’t want anyone else killed by the Dark Army, so Darlene forces Dom to go on a trip with her to Logan Airport so they can escape and hide out in Budapest until all of this blows over (Elliot, meanwhile, only makes a brief appearance in the episode to let Darlene know he’s going to the Washington Township to destroy Whiterose’s device).

Joey Bada$$ also makes a brief reappearance, too, to drive Darlene and Dom to the airport. He’s no longer Dark Army; he’s a free agent, so to speak, and he really loves Three Days of the Condor; it’s what made him want to get into the same. (Sidenote: Three Days of the Condor is a really f*cked-up ’70s political thriller where Robert Redford holds Faye Dunaway hostage until she f*ks him. It’s messed up, and I have no idea why this movie is revered.)

Meanwhile, at a crowded rest stop, Darlene pushes a button on her phone to execute her and Elliot’s grand plan. She transfers all of that wealth she stole from the Deus Group into the bank account of every person in America. “It’s the greatest redistribution of wealth in American history,” she says, as she and Dom peer out into a park and watch people’s faces to light up as the money hits their account. (Seth did the math on that, and based on his estimates, it was about $30,000 per person).

Once Dom and Darlene arrive at the airport, Dom has a chance run-in with Irving (Bobby Cannavale), because I think Esmail wants to bring everyone back for a last appearance as the show winds down. He’s in an airport bookstore promoting the book he was writing on the side last season, and Dom is terrified to bump into him, on account of the fact he chopped up her partner with an ax. Irving tells Dom not to worry, however, because the Dark Army has moved on. They no longer care about Darlene or Dom. They can do what they want. Dom and her family are no longer in danger. It’s all good!

The last five minutes of the episode are killer. As Darlene is walking away, Dom is crying, and Carly Rae Jepsen’s “Run Away with Me” kicks in. It could not be a more perfect song for the sequence. It morphs into practically a parody of a conventional, trope-y rom-com airport chase scene. Dom walks away, but she can’t bring herself to leave the terminal. As boarding begins, Dom turns around runs back through the airport. Meanwhile, Darlene has a panic attack before she can get on the plane, and she runs back to the bathroom. She’s freaking out. Dom is running through the airport. Carly Rae Jepsen is playing, “Run Away with Me.” Dom makes it in time, checks in and gets on the plane, only to find that Darlene is not on with her. Darlene is still in the bathroom freaking out, but as the airline attendant announces the last call for boarding, Darlene finally composes herself. “I can take care of myself,” she says, but also smiles as though she plans to catch up with Dom, who she doesn’t realize is on the plane. Dom takes off toward Budapest without Darlene, finally falling asleep after years of insomnia with Irving’s book in her lap.

Sam Esmail straight up trolled us with that Carly Rae Epsen song and the airport running. Well done, Sam. Well done, you dick.

← In 'The Daemon Cages,' 'His Dark Materials' Reveals What the Gobblers are Doing in Bolvangar | 5 Shows After Dark: 'Belichick & Saban: The Art of Coaching' on HBO, 'Ellen's Greatest Night of Giveaways' on NBC →