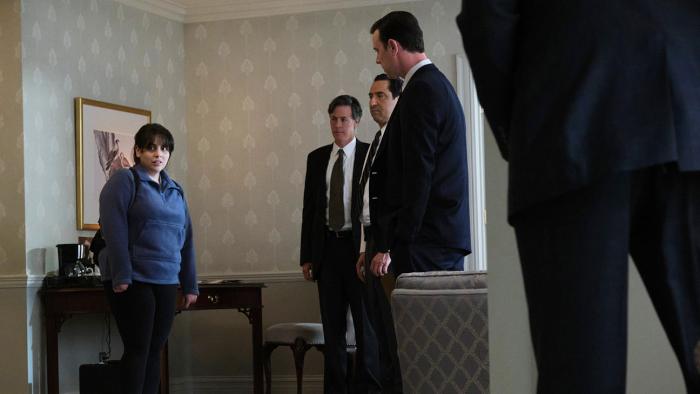 This week’s episode of Impeachment: American Crime Story has the distinction of being probably the best episode of the series, but also the one where there’s little advancement of the “plot,” so to speak. It’s practically a bottle episode, taking place largely in the Ritz Carlton hotel during an 11-hour sting operation called Operation: Prom Night orchestrated by Ken Starr’s Independent Counselor’s Office.

The point of the operation was to get Monica Lewinsky to call Bill Clinton and get him to admit in a monitored phone conversation that he had the affair with Lewinsky and that Vernon Jordan got her a job to keep her quiet (there were meant to be calls to Jordan and Clinton’s secretary, Betty Currie, as well). Bill Clinton was set to testify the next morning in the Paula Jones suit, and the intention was to get him on tape admitting to the affair so that they could catch him in a lie under oath the next morning.

The sting operation was predicated on their ability to persuade/manipulate a panicked Monica Lewinsky to agree to make the phone calls in exchange for immunity from what they suggested was a 28-year sentence for perjury, obstruction of justice, and witness tampering. What they apparently didn’t anticipate was that Lewinsky would care less about going to prison than she cared about not wanting to take down the Presidency or upset Bill Clinton.

Colin Hanks played the good-cop prosecutor, Mike Emmick, and he nearly charmed Lewinsky into the agreement on a few occasions, but Lewinsky repeatedly balked at the last moment and eventually insisted on calling her mother. Lewinsky refused to make a decision until her mom, Marcia (Mira Sorvino), arrived, which delayed the operation another four hours, during which time Emmick strolled around the mall and ate dinner with Lewinsky. Jackie Bennett (Darren Goldstein), meanwhile, played bad cop. He was completely useless. Whenever he yelled at Lewinsky, she would shut down.

Over the course of the day, Lewinsky grew increasingly skeptical of their ability to imprison her for 28 years for what seemed like relatively minor crimes (lying about an affair). When her mother showed up, they were able to get Lewinsky’s attorney, Bill Ginsburg, on the line. Once he got involved, he spewed a lot of profanities and ultimately shut it down when the prosecutors claimed they could not provide a written immunity agreement until the following morning. In the end, after 11 hours, Lewinsky walked out of the room with her mother and returned home, where Lewinsky contemplated taking her own life rather than face what was about to come.

As a ’90s kid, I think what I appreciated most about this episode was not just the intensity of it, but this was all new information even to me. I had somehow escaped knowledge of this operation, which itself was a spoiler (had it been successful, I’d have known about it). Still, there is intrigue in finding out how Lewinsky evaded prosecutors and in seeing them use legally questionable tactics in an effort to get her to cooperate. It’s also interesting to see Colin Hanks put that aw-shucks nice-guy schtick to use for the bad guys.

The episode also spent a few minutes with George Conway and Anne Coulter, the latter of whom was able to secure copies of the Linda Tripp tapes. They spent an evening in agony listening to Tripp and Lewinsky gossip over the phone before Conway killed Coulter’s buzz by conceding that there was nothing actionable in the tapes. Sleeping with an “office girl” did not rise to the level of high crimes and misdemeanors. At least Conway is consistent.