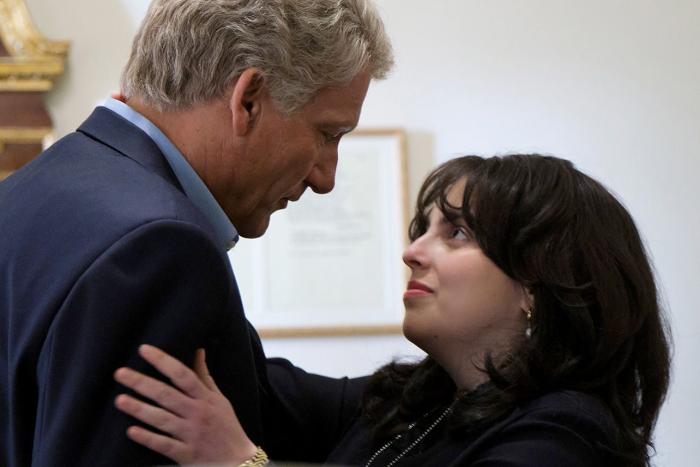 I don’t have a lot to say about this week’s episode of American Crime Story: Impeachment. This is the episode that features a fairly full accounting of Monica Lewinsky’s relationship with Bill Clinton, beginning with their first interaction, in which the two mouthed “Hi” to one another as they crossed paths near the Chief of Staff’s office. That relationship consisted of about 10 private sexual encounters, which ranged from kissing to much more, and around 50 late-night telephone calls, which included several phone-sex conversations. And yes, she did flash her thong at him as he walked by a door where she was attending a meeting at one point. Oh, and this scene — the sort of flirty but awkward encounter between Bill and Lewinsky replayed 5 million times on cable news — is faithfully recreated.

There’s nothing here that hasn’t been recounted in exhausting detail by the Starr Report, by a number of books covering the scandal, by Lewinsky herself, and less salaciously by Bill Clinton in his own memoir. He plays down the affair in his book, which is expected of someone trying to shape his legacy, but also probably not inaccurate: Clinton was a womanizer, and given the scale of his job and romantic indiscretions, Lewinsky probably didn’t hold that much space in his head when he wasn’t directly speaking to her or in front of Lewinsky.

What I cannot believe, however, is that Bill bought Lewinsky the same book, Whitman’s Leaves of Grass, that he gifted to Hillary during their courtship. I cannot say this enough about Bill Clinton: He is a sleazeball. There’s nothing illegal about being a sleazeball, but it is remarkable how easily sex could short circuit an otherwise intelligent man’s brain and transform him into someone that was just so … basic. A goddamn Rhodes Scholar goes full hick at the prospect of sex.

Lewinsky, meanwhile, was lovesick, owing to the sporadic nature of her relationship with Clinton. She was not particularly discreet about the affair. She told her Mom, she told her roommate, and eventually, she told Linda Tripp, and it didn’t take much prodding. It would be difficult for a 22-year-old sleeping with the President of the United States not to want to talk about it, and Linda Tripp obviously exploited that, both because she loved gossip and had a genuine affection for Lewinsky, but also because she had an agenda. I don’t think the agenda was entirely about selling a book. It was more about wanting to be a part of the action, wanting to feel relevant. It’s why she encouraged Lewinsky to wait by the phone for Bill to call, which is the exact wrong advice a middle-aged woman should be giving a 22-year-old. But if the President called Lewinsky, Tripp would get a story the next day, and that story gave her some of the power that she lost after she was booted from the White House and into the Department of Defense. At the end of the episode, Tripp also kicked the scandal into high gear when she reveals to Newsweek’s Michael Isikoff that rumors that Clinton had groped Kathleen Willey were small potatoes. “There’s a bigger story,” she told him. “Much bigger. You’re barking up the wrong tree.”

She was an awful human being, and to her credit, Sarah Paulson fully conveys that.

Elsewhere, Judith Light’s Susan Carpenter-McMillan — a conservative feminist, ahem — gets involved on the Paula Jones side, paying to get her a makeover and braces (I forgot about the braces!). Annaleigh Ashford goes all in on that Southern soccer mom look and even mentions Dillards, which made me a little homesick. Susan Carpenter-McMillan is purely an opportunist, as is Ann Coulter (rendered perfectly by Cobie Smulders), who joins the legal team with an eye toward impeachment. I loathe her, but sometimes wish the Democrats had a POS as ruthless and f**k your feelings as Coulter.

Next week, things get awkward when Bill finds out that Monica told Linda Tripp about their affair.