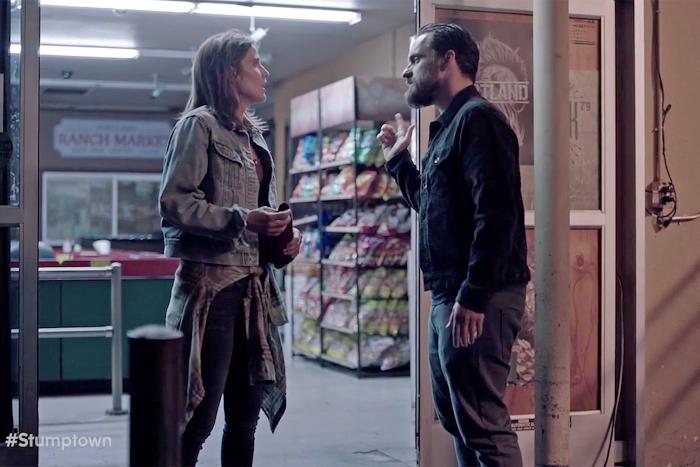 How the Hell Did Jake Johnson End Up on 'Stumptown,' Anyway?

Having watched two episodes now of several of the new fall network dramas, it feels like Stumptown may be the best of the lot, or at least the one most likely to survive into its second season. I like it. A lot. It’s cinematic and entertaining, but not too heavy, and the cast is outstanding, led by Cobie Smulders, Michael Ealy, and Jake Johnson.

Last night’s second episode also introduced what appears to be a longer arc outside of the case-of-the-week format, and it involves Johnson’s character, Grey McConnell, and a former criminal associate played by The Walking Dead and Fear the Walking Dead’s Amelio Austin. Apparently, Grey and his associate stole a lot of money several years ago, which resulted in an 18-month prison sentence. After the sentence, however, Grey used his money to open up the bar he now owns. It appears, however, that the third criminal associate, Frank, is coming after his cut.

But don’t expect Jake Johnson to become more than a supporting character on Stumptown, and that is partially by design. In an interview with Uproxx, Johnson told my friend Jason Tabrys that he turned down a number of leading man roles before accepting this one.

You know, when New Girl ended for me, I knew I had Into The Spider-Verse coming out, and the Me Too movement was hitting really hard. And it did feel like not only what the industry wanted, but what people wanted was different faces and different looks and diversity and [different] genders at the top of shows. And I thought, these jobs that I was being offered, were leads. I had about a year and a half of passing on opportunities because it was all a show about a guy in his forties who is struggling through life and trying to make it work. And so [the response] became, “I don’t think that’s the temperature right now.” Then I found something where it was a female lead playing a detective. And that’s mostly a part played by a guy throughout American TV history. And I was a secondary character. So, that felt like the right moment… to do right now.

Don’t expect Johnson’s character to get too involved in the cases that Dex (Cobie Smulders) investigates, either, or at least, that’s what Johnson hopes.

However, we should anticipate more of what last night’s episode teased: Johnson’s Grey is not all good. “My character is a guy that I like in that he’s half a good guy and he’s half a bad guy. And those two things are always in conflict. So if he’s really sweet for a while and he’s really there for Dex and he’s helping her … one hand is helping her and the other hand is stabbing her in the back.”

I won’t lie. I also really appreciate that Johnson reached out and “kinda” got the blessing of Mark Weber, whom he replaced on Stumptown.

I mean, the first thing I did was call Mark Webber, who is a super talented actor and [I] checked in with him about the production and what he thought, if he gave his blessing. He told me he loved working with everybody and he respects everybody and only had the kindest things to say about the production, which was great to hear. And then he kinda gave his blessing, which meant a lot to me.

Johnson seems like a good guy, and his character is part of the reason that Stumptown has been so successful, so far (that, and how insanely hot Michael Ealy is). The old married couple dynamic that his character has with Dex is terrific, particularly for the way it almost rules out a “will they/won’t they” arc, but leaves the door open to it a slight crack.

Check out Jason’s full interview over on Uproxx.

← Review: 'VHYes' Is A Coming-of-Age Found-Footage Comedy Ready To Rot Your Brain | Review: 'Almost Family' Is a Really Weird Show →