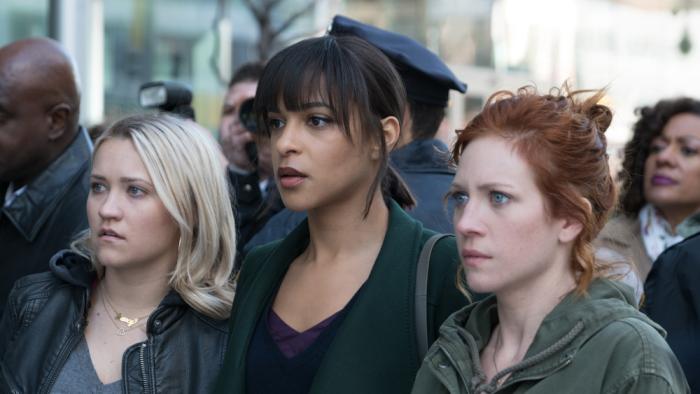 Fox’s Almost Family may be the weirdest new network drama of the season, and that includes a show about the off-kilter son of a serial killer investigating murders and a show about a little girl who crashed a plane with her mind.

Almost Family is about a guy named Leon Bechley (Timothy Hutton) who runs a fertility clinic and, who we discover, has been using his own semen to impregnate maybe hundreds of women over the course of decades. That’s not the weird part. That’s just the news these days. The weird part is that the show is really about three women who bond as a “family” when they find out they’re all the biological offspring of Leon, including Julia Bechley (Brittany Snow), the real daughter of Leon.

The premise is odd, and a little uncomfortable, more so because its tone is that of a dramedy. Like when Julia Bechley hooks up with a guy she later finds out is her biological brother, it’s played for squicky laughs instead of, say, a traumatic experience. Meanwhile, the three half-sisters/friends at the center of the show include Julia, her ex-boyfriend’s wife, Edie (Megalyn Echikunwoke) — who is having sexual feelings for a woman — and Roxy (Emily Osment), a flighty and washed-up social media star whose parents have been exploiting her fame.

It’s a very weird hodgepodge of characters and motivations, made doubly awkward for being set against the backdrop of an investigation into Leon for fraud and sexual assault. The show can’t seem to decide if it’s a very serious matter or this neat thing that happened that brought these three women together as a family.

Yet, despite all the weirdness, Almost Family is strangely not that interesting. I like both Brittany Snow and Megalyn Echikunwoke, but the writing here is flimsy and the motivations are bizarre. I’d like to say that the show could get better, but it’s never not going to be about three women who bond over the fact that they’re related by icky fraudulence, particularly when the prosecution of Leon Bechley will likely be one of the major storylines. I think that Almost Family, like Bluff City Law and All Rise, are dead in the water, but for the fact that Leslye Headland (Russian Doll) directed the pilot, which means I’ll give it one more shot to see if it miraculously redeems itself. I don’t have a lot of hope.