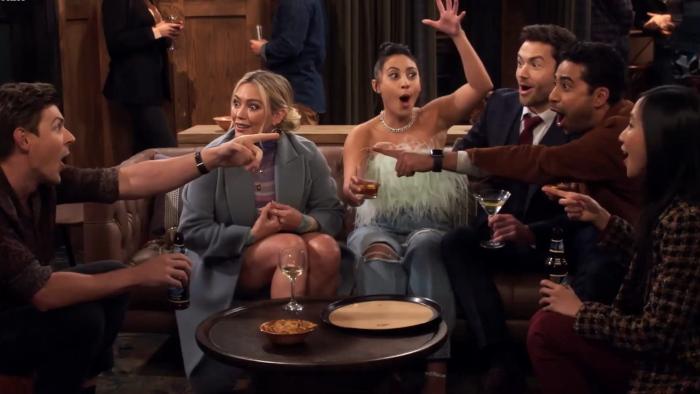 'How I Met Your Father' is 100 Percent Ted Mosby, Zero Percent Robin Sparkles

It’s hard to judge a new sitcom based on a couple of episodes. It’s not about the writing, which can get better. It’s more about the characters and whether there’s a potential to vibe with them. It’s not unlike a first date. Even if everything goes to hell, you can still tell if there’s a spark there. There may be some baggage of which you are unaware, they may say something in the future that will force you to reexamine everything you thought you knew, or you may not know yet that they drive a Jeep, but you can tell early on if this is someone with whom you want to at least spend more time.

How I Met Your Father fails on all three counts. The writing is mediocre generic-dating sitcom writing; the characters are less Friends and more Friends clones; and there’s not much by way of a spark. Even the actors we know and like - Hilary Duff and Christopher Lowell (PIZ!) — have been flattened by sitcom writing, stripped of their personalities, and turned into cookie-cutter sitcom caricatures. There’s no Robin or Barney here, just a bunch of Ted Mosbys.

Hilary Duff is the Mother, Sophie (played in 2050 by Kim Catrall, who bookends each episode from her future apartment); she’s the hopeless romantic beaten down by the New York dating scene. She lives with her best friend Valentina (Francia Raisa), the more adventurous of the pair. Valentina is in a brand new relationship with Charlie (Tom Ainsley), a straight wealthy British Barney who was cut off by his parents for pursuing Valentina. Christopher Lowell is Jesse, also known in NYC as Mr. Proposal Failure after a video of his girlfriend rejecting his marriage proposal went viral. His best friend is Sid (Suraj Sharma), the owner of the bar where they all hang out. He gets engaged in the pilot episode to a doctor (who otherwise isn’t around often). Jesse’s sister, Ellen (Tien Tran), recently moved to New York City because of all the dating options the city provides after divorcing her wife in Iowa. There’s also the dreamy Ian (Daniel Augustin), a marine biologist Sophie meets on Tinder. They are perfect for each other, only he moved to Australia to take a job and a long-distance relationship between Sophie and Ian is out of the question.

The slight twist on How I Met Your Mother is that we are told that the “father” is one of the men Sophie encounters on the night she goes out with Ian. It could be Ian, who leaves for Australia that same night. It could be Jesse, who is already Mosby’ing all over Sophie; or Charlie, who is sleeping with Sophie’s best friend; or even Sid, who is engaged. It’s one of those four, and not Drew (Josh Peck), who will have a recurring role on the series later in the season, presumably as a love interest for Sophie (I like both Peck and Lowell, but putting the two in the same sitcom is just asking for blandfusion).

The thing about How I Met Your Father, however, is that after two episodes, I don’t care who the father is. Granted, it took a while to invest in the romantic drama at the center of How I Met Your Mother (it wasn’t until “Cupcake Girl” showed up that I started to care), but it didn’t take long to invest in the characters, even before Jason Segel and Cobie Smulders were names we knew, or before we could separate Alyson Hannigan from Buffy or American Pie and Neil Patrick Harris from Doogie.

I don’t yet see that potential in the Father characters, who so far seem to exist to deliver bad jokes that are appreciated only by a laugh track. The diversity of the cast notwithstanding, it doesn’t feel like a 2022 sitcom. It feels like a grown-up version of one of those Disney tween sitcoms, like an adult Lizzie McGuire reboot, which ironically was scrapped in 2019. I think the McGuire reboot scripts may have been repurposed for How I Met Your Father.

The sitcom may yet blossom, and it may yet find some hidden depths or a sharp sense of humor, but right now it’s not there, and there’s nothing yet that indicates there’s much hope for it to dramatically improve. It’s a shame, too, because if they chose this gender-flipped reboot over the originally conceived one with Greta Gerwig (and Meg Ryan as the older mother), either the Gerwig version was really bad or, more likely, not bland enough to attract the imaginary mainstream audience they thought would turn out for the Duff version. How I Met Your Father feels not as though it were written by Gerwig but by an algorithm designed by focus tests.


← Retta Crowns 'The Ugliest House In America' on HGTV | HBO Max's 'Somebody Somewhere': Life is a Cabaret! →