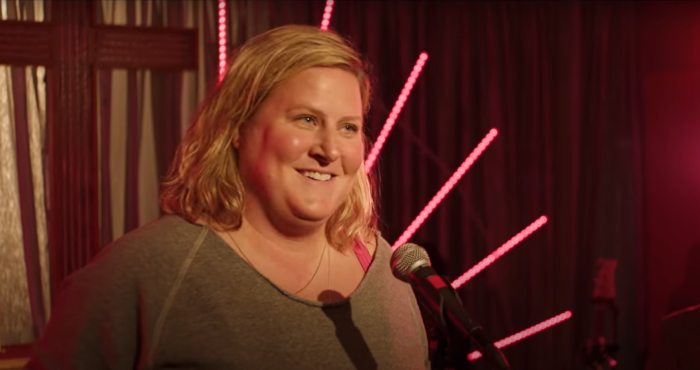 HBO Max's ‘Somebody Somewhere’: Life is a Cabaret!

Manhattan, what many people consider the bustling heart of New York City, is the home of approximately 1.6 million people. It’s also the base of numerous companies and financial institutions, as well as a countless assortment of madcap entertainers and personalities. Then there is Manhattan, Kansas, which boasts a population of around 54,000. Aside from it’s familiar moniker, it’s probably best known for being the home of Kansas State University, along with several federal bodies (including the future home of the National Bio and Agro-Defense Facility, which sounds, um, intimidating to say the least). It’s about to also be known for being the setting for the new HBO Max series, Somebody Somewhere, starring Bridget Everett, herself a Manhattan, Kansas, native.

Everett plays Sam, a woman who recently had to move back to her hometown (the aforementioned Manhattan, Kansas) to tend to her ailing sister, Holly. The series opens six months after Holly’s death, with Sam still in town and valiantly trying to stave off the immense sadness she feels at having lost someone who meant so much to her. Yes, this series is a comedy, but like some of the best comedies, it’s one that’s structured around some of the more complicated human emotions. Unsure of the next step in her life, Sam grudgingly opts for inertia, working at a standardized testing center and grading the essays that are the bane of every K-12 student while living in Holly’s former home, which Sam has left entirely unchanged. Her family offers little comfort, with a mother (Jane Brody) who has a drinking problem and a self-righteous conservative sister, Tricia (Mary Catherine Garrison), who’s resentful of the close relationship her siblings had. One of the few bright spots is Sam’s emerging friendship with her co-worker and former high school classmate, Joel (Jeff Hiller), who invites her to an after-hours church event. It doesn’t sound like her scene, but motivated by a general aimlessness and in need of comraderie, Sam makes a last minute decision to attend only to discover that this seemingly stuffy church event is, in fact, a fledgling cabaret that operates as a small enclave of queer artists and other creatives who perform various acts. It’s an environment that invites her to get back in touch with herself and feel more at home in a town that feels like anything but.

Co-created by Hannah Bos and Paul Thureen, as well as executive produced by, among others, the Duplass Brothers, the plot of Somebody Somewhere isn’t technically all that groundbreaking, but the cast alone is enough to make it feel as though it is. There have been a handful of starring roles for plus-sized female actors (the beloved Shrill being among the most recent), though few have storylines that don’t revolve around the pursuit of weight loss, and even less with leads that are middle-aged. At nearly 50, Everett—to use a clichéd saying—feels like a breath of fresh air, an adult woman who’s been around the block enough to fall into the belief that there’s not much more to look forward to, only to realize that maybe that’s not the case. Everett is best known for her ribald comedic musical acts, though most will probably recognize her from Inside Amy Schumer. Here, however, her bawdy persona has been held back in favor of a more vulnerable guise, another contribution to the ever-growing tradition of comedic performers owning the hell out of dramatic roles.

Hiller is destined to become a stand out among the ensemble. Should the show catch on with viewers (which it deserves), I think you’ll be hard-pressed to find anyone who doesn’t think Joel is an absolute cinnamon roll of a human being. As a gay man in Kansas, it would be easy to present him as either a tragic figure or a hyperactively boisterous caricature, but Hiller has a less extreme take on the character. Joel is a sweetly earnest man seemingly without artifice (his frank admiration and respect for Sam is deeply touching), who’s optimistic without coming off as unrealistic or, worse, annoying. There’s a scene in which one of the attendees states their lingering discomfort with the church atmosphere and Joel, while still affirming the other person’s experience, goes on to admit that despite the many negatives that comes out of organized religion, he still finds church to be a source of spiritual comfort. He’s sure to be one of the major factors that brings Sam out of her depressed state, and I look forward to his emerging storyline.

This is almost sure to be the next big feel-good show (along with the delightfully quirky Abbott Elementary), though Somebody Somewhere is much more grounded than most of its predecessors. There’s nothing zany here beyond what the average person is typically capable of. Although it has a small town feel, the show wisely refrains from depicting the local residents as cartoonish yokels, framing them as simply people, some of whom may be less likable than others, but people nonetheless. This is what makes Choir Practice, the name of the secret church cabaret, so special: it’s less exquisitely choreographed numbers than it is scribbled poetry and women who look like bank tellers doing Gloria Estefan covers. As emcee Fred Rococo (played by famous drag king Murray Hill) says, “Who would’ve ever imagined that these two nobodies would someday make it all the way to this here stage, at a Presbyterian church in a dying mall in the eighth biggest town in Kansas?” What a stage it is.

Somebody Somewhere is streaming on HBO Max, with new episodes available on Sunday nights.

Kaleena Rivera is the TV Editor for Pajiba. When she isn’t catching up on Bridget Everett’s particular brand of musical comedy (the “Titties” song is as catchy as it is NSFW), she can be found on Twitter here.