Last night’s episode of The Outsider, “Foxhead,” took another step toward what will probably be a very terrible, very bloody ending for this HBO adaptation of Stephen King’s novel. (I HAVEN’T READ IT; DON’T SPOIL ME; I HAVE LIKED THE SERIES VERY MUCH.) All of our protagonists, all of whom I love very much, arrive in Cecil, Tennessee, to track down the supernatural boogeyman they’re all calling El Cuco, a.k.a. the Grief Eater. Clairvoyant investigator Holly Gibney (Cynthia Erivo, excellent) is there; her paramour and admirer, the former detective Andy Katcavage (Derek Cecil, charming), is there; skeptical detective Ralph Anderson (Ben Mendelsohn, fantastic) and his more open-minded colleague Yunis Sablo (Yul Vazquez, who has my whole heart) are there; Iraq War vet and investigator Alec Pelley (Jeremy Bobb, killing it), who has worked with Holly before, and lawyer and original employer Howie Salomon (Bill Camp, so grumbly and great) are there. Everyone is convening to protect Claude Bolton (Paddy Considine, hawt), ex-con and former Peach Crease manager and future fall guy for El Cuco, and everyone knows something deeply wrong and unnatural and malevolent is on their tail. But what is El Cuco doing?

Here’s what we know so far about this entity, information collected by Holly over the course of her investigation in Georgia, Chicago, Ohio, and New York: El Cuco is a being that has existed, possibly, since the beginning of time. It’s a shape-shifting demon that can do some really impressive stuff, like transform into the duplicate of another person over a period of 3 weeks, but also does some silly stuff, like only being able to replicate itself through scratching another person. It can basically infect people into following it against their will, and it can get into their heads and control their actions, and it basically makes them pawns or minions. It needs to consume flesh and blood to survive—it would be a cannibal if it were human—but it also relishes the pain and anguish it leaves behind in its wake. To paraphrase something Holly says, the ruining of families is its dessert.

Oh, and what else is El Cuco doing? Terrifying the shit out of me!

I’m not a religious person. I don’t believe in God and don’t really practice anything now, but I was raised Muslim, with some Iranian cultural practices (mostly influenced by Zoroastrianism) and various superstitions thrown in. Some stuff that will be recognizable to you—don’t step on cracks, knock on wood to ward off bad luck, wearing and decorating with evil eyes—and some stuff that is particularly Iranian, particularly old country. With all that in mind, I think about the exchange in the episode “Que Viene el Coco,” between Holly and Susanna Guzman’s character Idilys Castro, whom Holly meets in prison while speaking to the incarcerated Maria Caneles (Diany Rodriguez), a lot. As a reminder for you:

Susanna: Holly! Do you believe in God?
Holly: Of course. He’s the explanation.
Susanna: Explanation for what?
Holly: For, uh, everything in this world that ever happened to me that I don’t understand, that I never will.
Susanna: And the devil?
Holly: What about him?
Susanna: Do you believe he exists?
Holly: Well, if I believe in God, I guess I do. Well, no, I definitely do.
Susanna: One devil or many?
Holly: Many.
Susanna: Right. … When you were a child, who were you told would come for you if you misbehaved, if you didn’t go to sleep?
Holly: Uh, Jumbee. My great grandmother was from the old country.
Susanna: For me, in Cuba, I was told El Cuco would come. My grandmother, when she was a child, was told the same. Her grandmother, before they left Spain, was told the same. Back, and back, and back it goes.
Holly: El Cuco?
Susanna: “Duerme nino, Duerme ya/Que viene El Cuco y te comerá.”
Holly: Uh, “Sleep child, sleep now/Else Cuco comes, and eats you.”
Susanna: El Cuco, Jumbee, met an old Russian woman once who called hers Baba Yaga.
Holly: Uh, the Boogeyman.
Susanna: If you like. All the old cultures, we had the bad habit of turning truth into fairy tales. When we tell our children about El Cuco, we say, “If you misbehave, it’ll take you away and eat you.” What we should tell them is, “It doesn’t matter either way; it takes what it wants.”

I excerpted this whole scene, which I think is fucking great (in a show full of exceptionally cast actors and actresses, Guzman really sticks out), because to me it really cements what has spooked the hell out of me about The Outsider. And that is the recurring, overlapping folklore that speaks to a boogeyman character throughout decades, centuries, millennia, all around the world, in various different cultures and religious structures. When Susanna said “El Cuco,” the hair on my arms stood up, and I thought of my own childhood, being told by my parents if I didn’t behave, LooLoo would come.

Who was LooLoo? Or, more appropriately, what was LooLoo? Well, if you look it up on Iranian-language Wikipedia, you’ll see a familiar image in its entry: Goya’s 1799 painting “Que Viene el Coco,” the inspiration for the title of that The Outsider episode and one of the images that Holly puzzles over. 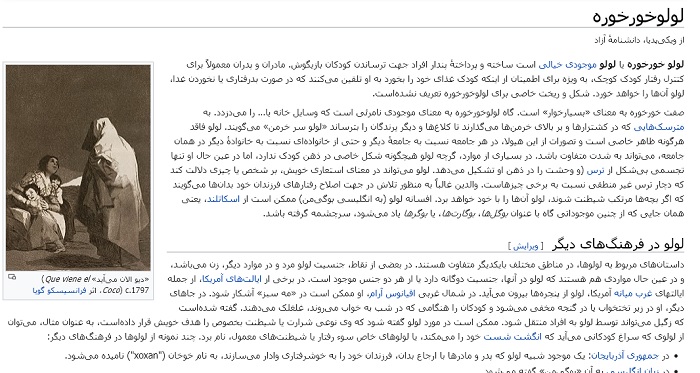 I remember asking my parents when I was a kid what LooLoo looked like, but I don’t remember now what they said. I always imagined horns and claws, though, and hooves—a sort of goblin who came in the night. And I remember the nursery rhyme my parents would sing to me, the rhyme that doubled as a warning:

Translation: LooLoo is hungry. LooLoo will eat me. If I was misbehaving, my parents would warn me of LooLoo, which now in Iranian slang refers to someone ugly, someone greedy, someone wicked. The mention of the being was sort of shorthand for my parents and my maternal grandmother, as a threat for anyone not acting right. A very specific thing my parents warned against was cutting my fingernails or toenails at night. LooLoo would come for me, they said—my nail clippings were like an invitation. A delicious snack, before eating all of me. Before feasting on a child.

So last night, when El Cuco as Claude spoke from the backseat of the tortured Jack’s (Marc Menchaca) truck, when it beckoned with its hand, when it tore into the flesh Jack presented to it, when it screamed and raged and even threw bones at Jack in its anger? I thought of LooLoo, and of all the ways parents try to control their children. Try to protect their children. I don’t believe in God, but I do believe in the power of that love, and that fear. Maybe you think El Cuco is an urban legend, or a folk tale, or a demon. Whatever it is, real or fake, it casts a long shadow—and that’s where LooLoo lives.

← Let's Talk About ABC's 'The Rookie' (and What's Up with Detective Armstrong?) | Turns Out, Pete Davidson Wasn't In on the Joke at 'SNL' →